I Aimed Too High

Hey everyone. It’s Deven again. I’m here to tell you that things are  going to be slow starting around here because my internet’s down at home. Due to that I can’t really watch the anime that  I’m going to be reviewing plus that darn International Dateline screwed up my brains on which anime are coming out when.

See as most of you know I live in America and Japan is across the International Dateline so they are one day ahead of me. So an anime that is supposed to launch on the fifth there would come out on the fourth here and that screwed up my timing. However that’s not the main point.

The point is that until my internet is back up, I can’t really do any reviews. However once everyone’s all green again, I’ll upload all the reviews at once. Then I’ll start a new style of reviewing which is basically when I can see the anime, I’ll drop a tweet on Twitter that I’m watching it then the next day the review will come on here at 7:17 am American Eastern Time. 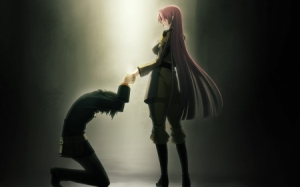 So please bare with me until my internet’s back up. My landlord says that it should be back up by the end of the month at least.

4 thoughts on “I Aimed Too High”