Since this is the first(and seeing how far I am behind, not the last) let’s make this one a double review! Isshuukan Friends! Episodes 2 and 3. Let’s go to all those feels!

Okay here we go. Let’s take a dive into the second episode!

We start off where we ended at episode 1. Yuuki asking to be Kaori’s friend again.

Only for him to get this 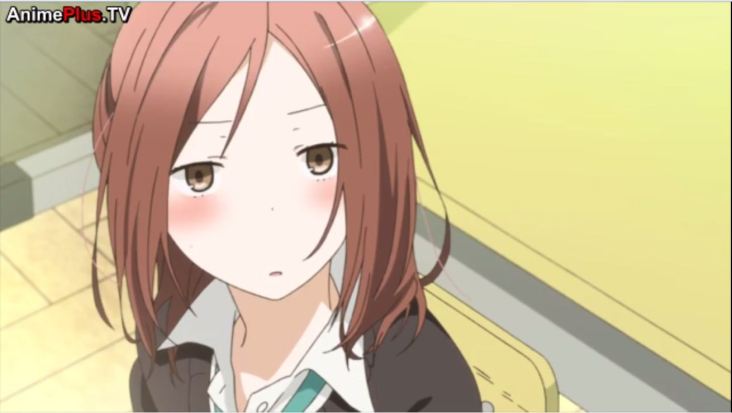 She has no idea what he’s talking about.

Yuuki just gets all those sad feels. Same on my side. But his loveably cynical best friend Shogo reminds him to get back out there and reminds that Kaori Fuijmiya isn’t as cold as people think.

Renewed by this, he goes to the usual spot(It’s not in Twilight Town! I think that’s what I’ll call the roof since half the scenes take place there) where he sees Kaori eating alone again. 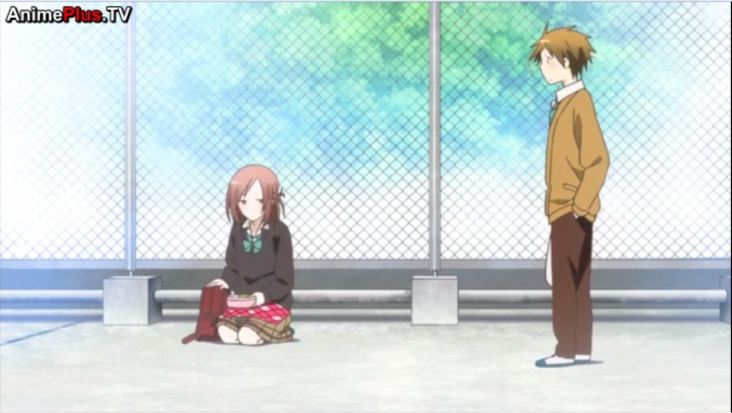 Back to the Usual Spot

He keeps trying to tell her that he ate with her all last week and even became friends with him. She doesn’t know who he is other than a classmate until it clicks. She doesn’t remember what happened during all her lunch periods last week.

So they must have become friends! That’s why she doesn’t remember him! Yay for amnesia!

Our two returns to eating lunch until Yuuki gets the idea for Kaori to start writing a diary so she can remember. It’s a good idea but that’s where things go wrong in my opnion. I’ll share at the end of the post(Yay, I’m writing in order of the episode!)

After a few scenes of Kaori writing some stuff that’s happened that week, on Thursday she gets a flyer for the same Crepe stand that she got in the first episode. 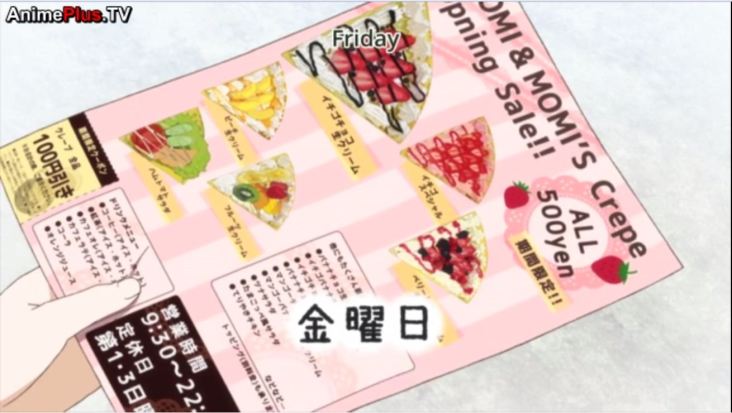 They both decide to go on Sunday but…

Should have checked the bottom of the flyer. They’re closed on the first and third Sunday.

But no fear, Yuuki remembers something that she said last week about never going to Kaoroke so they hit up the nearest kaoroke place and have a great time. 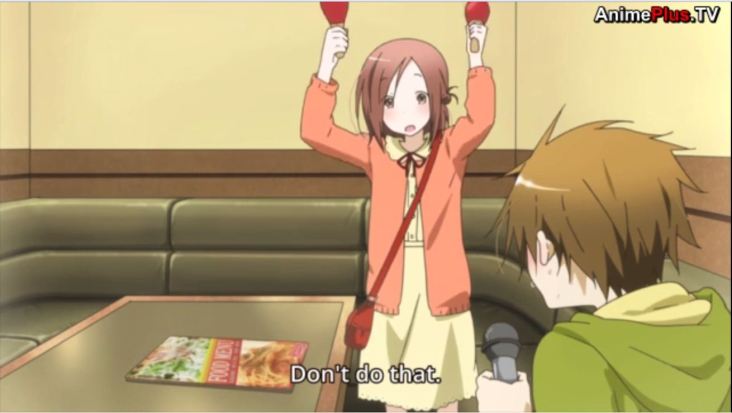 After the ride home, Kaori sets up this sign for herself.

And leaves her diary on the desk after writing in all the stuff she did that day.

This is going to be important later

The next day we see at lunch that didn’t work. These what her memories look like.

What she wrote is like she’s reading the writings of a stranger and talking to Yuuki is like talking to a person for the first time. That’s the point I wanted to make. It doesn’t really matter how much what she writes if she can’t connect to the feelings when she wrote it. She’s a new person every week. The only thing the diary can do is remind her that Yuuki is her friend. The relationship itself must be rebuilt each and every week.

Good thing that Yuuki realizes this and we end the episode with that.

Okay everyone here’s part two of this double review. Friends of Friends

Wait a second. Before we dive, I just want to say that this anime’s opening is awesome and I can’t wait for the full version to come out. It’s some good music to listen to while writing.

Okay now let’s do the dive.

We open with Kaori making a whole bunch of fried eggs but for who?

This is a lot of Eggs 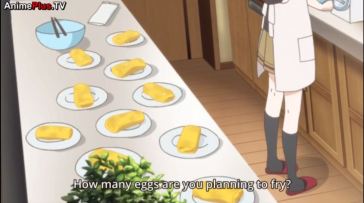 Who’s going to eat this much?

Of course it’s for Yuuki…

Do they taste good?

Turns out she made the eggs just to know how it feels to eat with friends and talk about how good it is. She seems really happy that Hase likes the eggs with 18 grams of sugar in it.

You know watching(albeit late) this anime makes me see how much we don’t cherish our friends and the times we have with them. We laugh, we talk, we eat together, and play together but we don’t cherish it. We don’t see it as anymore than hanging out with friends. We think that they’ll always be there tomorrow. But Kaori she’s getting all these experiences for the first time and cherishing every one of them. This is how you should treat your friends.

Anyway to the next major scene, Hase and Shogo are watching Kaori leave school when Hase asks him if he likes Kaori. He answers with he doesn’t really like her or dislike her. He also says something that we should all follow in some ways.

Which is really true. You can have friends that aren’t friends with your friends which is subtly telling Hase just because he’s not friends with Kaori doesn’t mean that he should stop being friends with her.

Next day…he doesn’t get it. He asks Kaori if she wants to try to make friends with Shogo too.

And with Shogo’s some what low and kinda negative attitude it goes about as well as it expected. 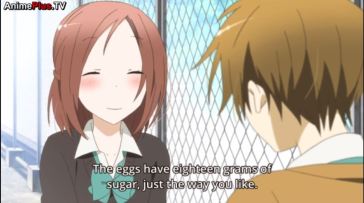 He’s also more blunt than Hase, asking the tough questions. How long as it been happening? Is she faking? Why is Hase doing all the talking for her? 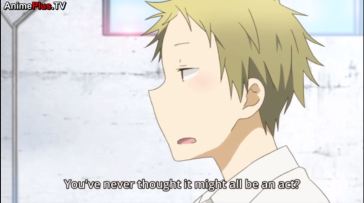 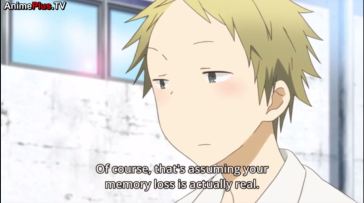 He’s got a point.

Hase should wonder about this.

You can’t deny that he’s got a point. What if everything Kaori’s doing is just an act? I’m guessing it’s not but who knows? Then again Shogo’s supposed to the foil to Hase, the cynic to Hase’s idealist.

Moving on to the next scene, Kaori’s asking Hase why he hasn’t made up with Shogo after fighting about her. He tells her not to worry. They’ll make up…eventually. We’re guys. We don’t make up. We just let it go and forget about it.

After that, it’s a scene with just Shogo and Kaori in the classroom. She tries to go up and talk to him but she gets interrupted by another classmate. She leaves without saying anything and goes down to her locker, ready to leave. However she left her diary. She tries to go back into the class to get it but there’s people in there and she’s afraid so she goes to the roof until they’re all gone.

When she goes back to get it she hears some of her classmates talking about how she’s changing, starting to smile especially when she reads her diary. They think she’s weird.

Those girls. They made Kaori cry. 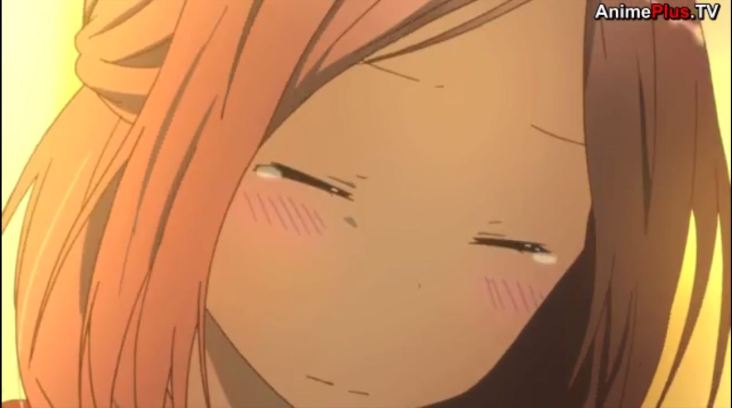 If only they knew.

Shogo to the rescue…in his own way though. He just goes in, picks up the diary, and comments that people that talk about others’ backs are weird too. He tells her that if she doesn’t want people to misunderstand her then she should tell people what she means. 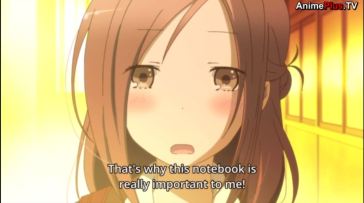 Tell them how you feel, Kaori.

They won’t know if you don’t

I guess it also means something with why he asked Hase why was he talking for her. He isn’t going to understand if she doesn’t talk for herself. That’s what makes real relationship with people.

That’s important stuff there but the kicker and the most important is the stuff that happens that Monday.

Remember the eggs with the 18 grams of sugar. She remembered it with all the feelings that come with it. It’s a great first step to keep all of her memories about her friends.

She remembers making the eggs. 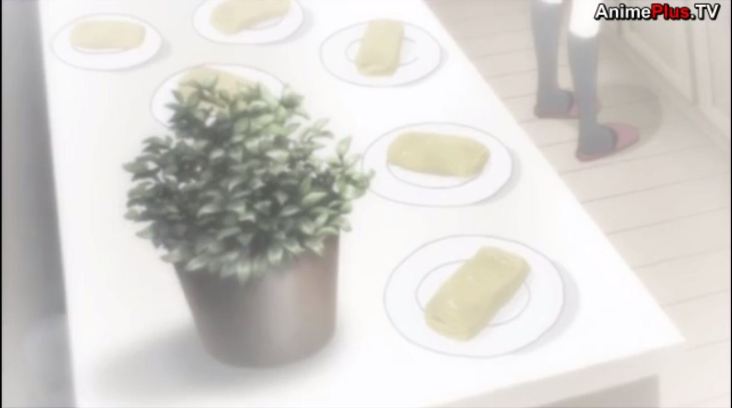 This is the first step to remembering everything.

And as a bonus Shogo starts eating with them on the roof!

Three friends eating on the roof.

There we are starting of a new chapter in this friendship.(or lack there of. Kaori only remembered Shogo because she doesn’t consider him a friend but hey he can get there.)

So that’s the end of the review.
I just can’t wait for the next episode. It’s really an anime that draws you in.

Until the next episode
Later Days

Also follow me on Twitter so you know when my reviews are coming out and ask me questions on Ask.fm.