Let’s Look:Akuma no Riddle Episode 1- We Know Who’s The Target is

I’m late to the show but ready to go. Now the newest
anime blog has been born!

Now what we’ve got here is something every season of anime needs. Yuri, blood, and violence! A good old
fashion battle anime right out of the gate, that’s what
Akuma no Riddle is.

For those that don’t know Akuma no Riddle is originally
a manga written by Yun Koga and illustrated by
Sunao Minakata. If you’re jumping in the series
and you have no idea what you’re looking at just like
me I’m willing to give a quick overview because I’m
a nice guy.

Haru Ichinose is a student at a private girls’ boarding school, Myōjō Academy, who is being targeted by 12 assassins disguised as students. Tokaku Azuma is a transfer student and an assassin who also initially targets Haru, but eventually develops feelings for her and decides to protect her from the other assassins.

Okay let’s do a dive!

It’s easy to see from this fancy Wikipedia paragraph
above that this is an action filled yuri about one
girl protecting her girlfriend(future, probably? I’m
just seeing the first episode now.)

Episode 1 starts off with some type of training camp.

Oh! Someone just got owned! 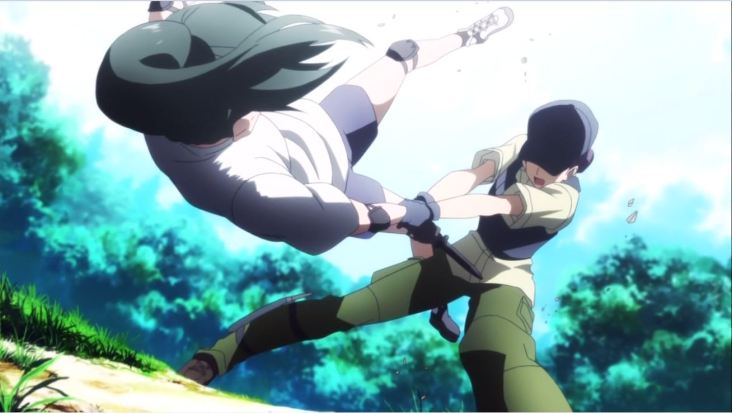 Someone just got Owned!

And here runs in our protagonist, Tokaku Azuma. 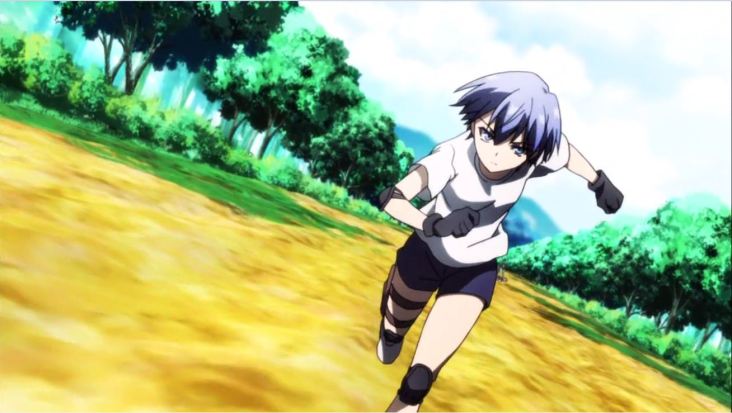 Okay let’s get back to the story…

The first thing(other than those girls getting totally
owned) is Tokaku is an epic monster, first one to finish
the course I just showed you. One part had a epic knife
fight which she won like it was no sweat.

After that we get our principal… client… I don’t really know what to call him so let’s call him the guy with the dice, Kaiba. 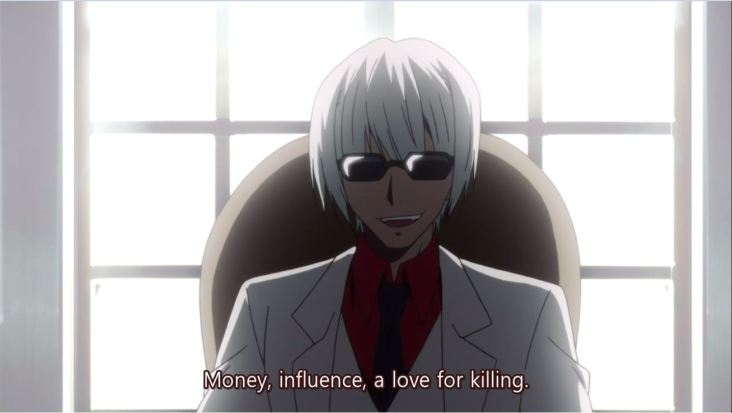 He basically explains the plot. Tokaku is transfering
into the Black Class(a class at Myojo Academy) to
kill the target who’s still unknown while competing with
twelve other assassins, all girls. They’ve all been
trained since birth and have varying motives. Some do
it for the cash. Others for the influences and some do
just do it because they like killin’.

Oh also Kaiba sends Tokaku these weird riddles. I guess that’s where they get the name from but where the does the Akuma(meaning Devil, Demon, and various similar other words in Japanese) 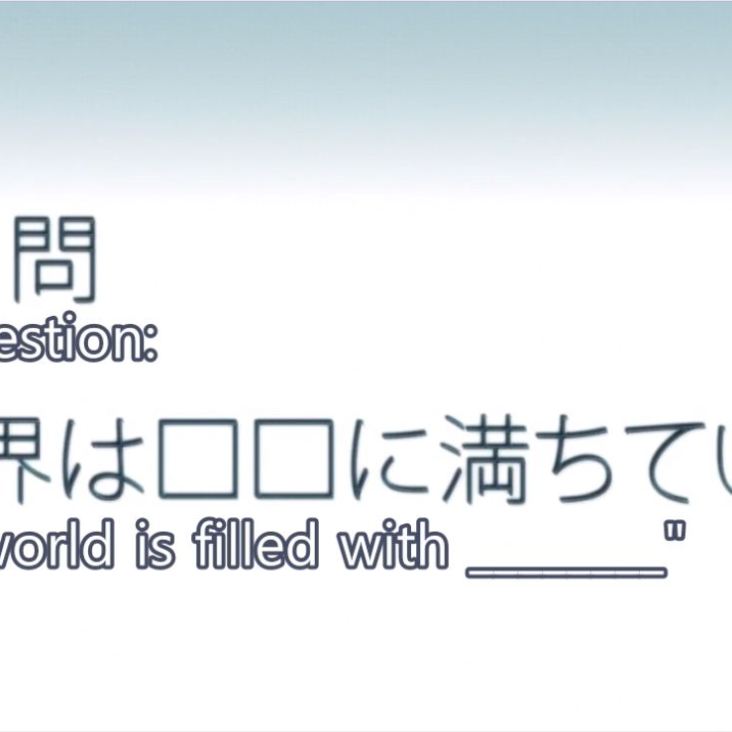 What does it mean?! Darn Riddles

Now next scene(well not next scene more of next important scene) We see a girl in the class that Tokaku is going to. She’s reading off all the names of the girls that are going to be in that class. 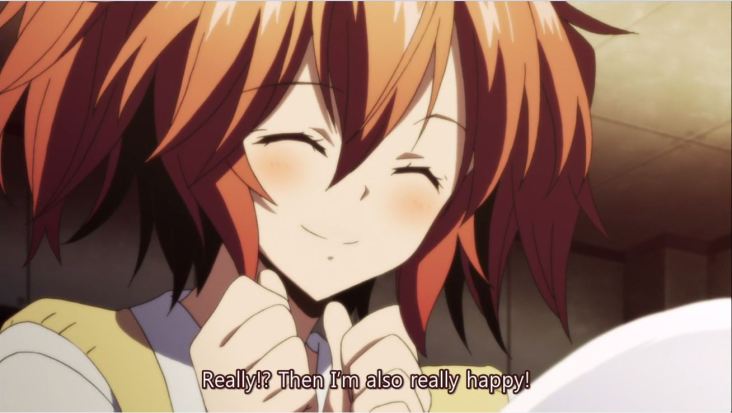 It’s our Target! Get your bull- eyes right folks.

Now maybe’s it just me or just does she scream defenseless target? Maybe I’m jumping the gun.

Now for a language lesson. I know you don’t want to hear it but this is going to be quick. Promise.

In the Japanese langauge there are multiple pronouns to refer to oneself. Typically in anime, pronouns indicate the user’s personality like Watashi for shy, formal, or polite types

Now Haru speaks in the third person. In Japanese it is usually used for children but adults that are childish or want to sound cute use it too like Juvia Lockser from Fairy Tail.

Now if this doesn’t add more defenseless target points I don’t know what will.

Now we go to the scene and a classic in School type anime the classroom introduction.

Oh we’ve got our first ‘I’m going to kill you’ face of the anime. Don’t worry we’ll get a lot.

Then we’ve got the girl I think I’m going to like the most in the anime, Nio Hashiri!

Then we’ve got this girl…
She ain’t saying much right now but wait ’til the sun’s down! Wooo! Scary.

Anyway after class, Haru catches up with Tokaku and tells her that they’ll be roommates and they walk around a bit, eat some dinner where Haru basically spills her guts about her dreams and how she barely managed to make it into the school. Hmm…suspecious.

Anyway after that they head to their rooms and do the room check where we see the some of the other girls. 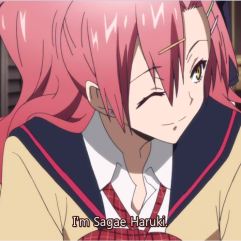 Haruki Sagae. Definitely seems like a good and interesting character. 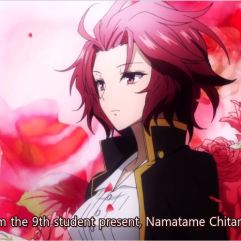 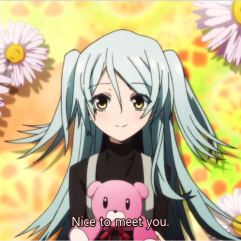 Most of the Black Class has been assembled and the girls head to bed only to receive their orders who the target is. One guess who it is. 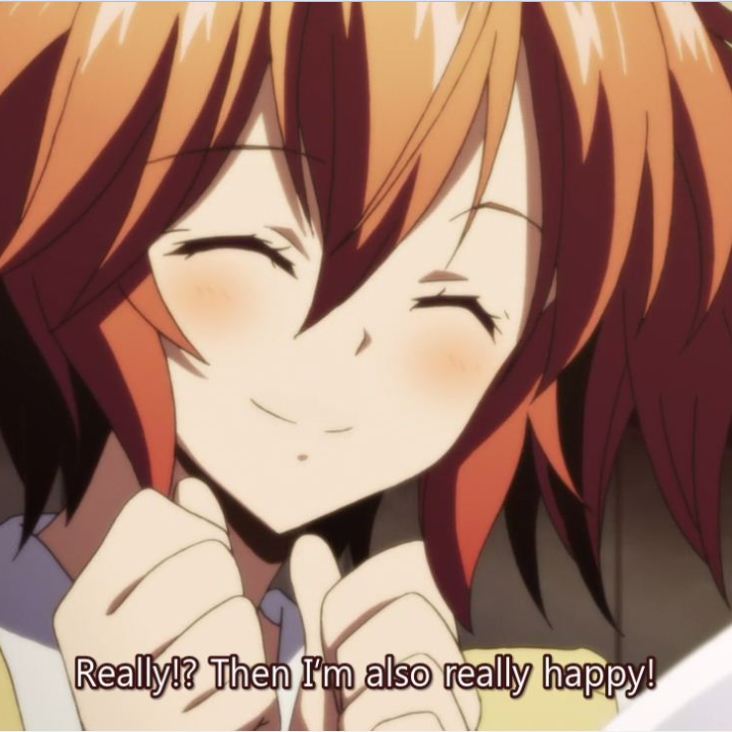 It’s our Target! Get your bull- eyes right folks.

But hey it’s only the first episode. The anime’s young and maybe someone with blue hair might help out and save her something…

So thanks for reading and see you on the next one

Okay this style of reviewing isn’t me. Plus it takes up a lot of time. Usually my Daily Mythological Creatures post take about thirty minutes to write. This took me two days! With me being so behind I’ll never catch up. That’s why I’m going to use more words and less pictures and learn the meaning of the word summarize. Next review will be only the meat of the episode and some of the veggies for you vegetarians.

Until then, Later Days.

Make sure to ask me questions at Ask.fm