This was definitely the most shocking episode of the season.

This is the best yuri 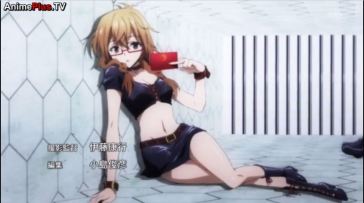 Glasses and leather but not as sexy as Kouko

I can’t believe this episode. Three attemps on Haru’s life in this episode, Hitsugi Kirigaya, Chitaru Namatame, and Shiena Ken’mochi.

Probably out of the three Chitaru gets the most backstory out of the three of them. Even then it’s about a drop in the Pacific Ocean. An assassin named Angel’s Trumpet killed Chitaru’s teacher’s daughter so she joined the Black Class to track them down and kill them.

Hisugi yeah…nothing about her other than the fight that she’s Angel’s Trumpet.

The dots are more than the backstory that she got.

Okay now to get to the meat of the episode. It’s not a very Haru and Tokaku heavy episode in fact it’s the opposite. This episode is all about Kirigaya and Namatame. In fact this episode is so little about them, I’d consider side characters this episode.

So anyway, we got the girls in the Black Class putting on Romeo and Juliet. 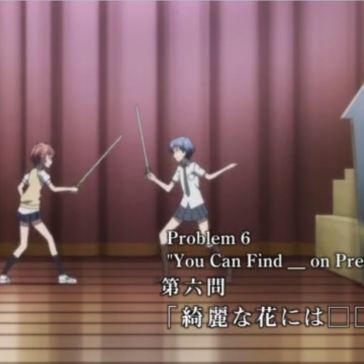 Ah the barely yuri couple is playing the twosome that got killed. I believe that Tokaku is playing Mercutio.

But the real yuri is this…

So much beautiful yuri 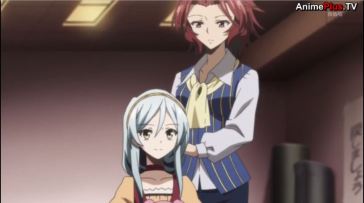 So things seem like a good old fashioned play. Can’t have that!

So we’ve got this…

Someone’s making her play! But where’s our overly friendly protagonist…

A little over twenty feet away. She makes it too easy.

Oh so that’s why she carries that bear. What am I saying? She just poisoned her!!!

Now this is important. Some folks are thinking because Shiena didn’t make an active attempt on Haru’s life she’s still good and she’ll be coming back after she gets over some poison.

Nope remember rule 3, I think. You can’t involve anyone outside the Black Class but that means that you can use people inside the class and Kirigaya handed Haru the notice so she acts a proxy so it counts so Shiena’s out.

And while she’s at it Kirigaya gives Haru her notice!

I didn’t see a flower for Shiena. I’ll look through the episode again and update if I see it.

Kirigaya is the epicness of this episode. Earlier in the episode Kirigaya tells Namatame that she’ll help her find Angel’s Trumpet. So being a freaking genius she tells her that Haru’s Angel’s Trumpet, sending a badass Chitaru Namatame after Haru.

So basically if Tokaku didn’t notice the poison they would have stabbed each other during the stage fight and poisoned each other. Clever, Kirigaya but now that’s Tokaku’s figured out what’s your plan now?

Oh that…
Not bad.

So Tokaku put Haru with the teacher so Namatame can’t touch her. 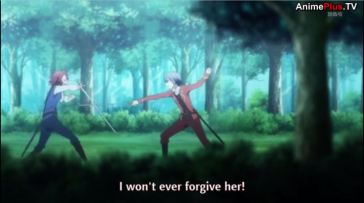 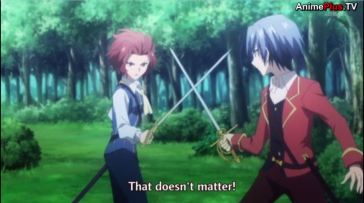 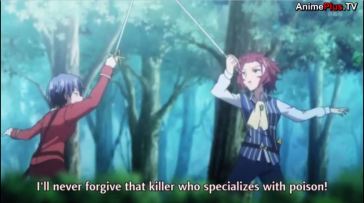 You know I’m shocked that it took this long to get to someone that fights with a sword in this anime.

Now the next part requires needs a bit of guessing. If this was just anyone Namatame would just go all Sword Art On Kirigaya’s Line but she didn’t.

Kirigaya and Namatame do the final scene of Romeo and Juliet but they do it for real.

And these violent delights have their violent ends

This definitely the epic episode of the season. Now that Shiena Ken’mochi, Hitsugi Kirigaya, and Chitaru Namatame are out of the game. We’re down five assassins, Nio Hashiri ,Isuke,Inukai, Mahiru Banba, Sumireko Hanabusa, and Suzu Shuto. I think things are about get really heavy!

I can’t wait for the next episode. We’ve got something good right now.

Personally I think that Suzu Shuto is next up on the list.

This going to be something good.
So until the next episode
Later Days