And another cute girl arrives to start up the Shipping tides! I’m still Naoto x Koumi.

We open up with two girls sitting around in the snow with a microphone listening to a train pass by. 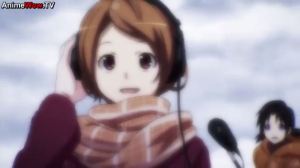 After the opening Minori Chihara is such an awesome singer and now the opening is out on HikariOST. Check it out!, we have the same girl with the mic in the snow on the train. 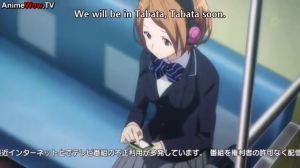 So anyway Naoto comes in and greets her and we found out that they’re apparently friends. Her name is Mari Sassho.

Mari teases and calls Naoto senpai and Naoto gets confused because they’re the same age. Mari says that he’s a month ahead so it still counts. Naoto says he may have been only working there a month but it feels like he’s been working there a year.

So they reache the Tabata stop and both of them stop to listen to the trains race to the Tokyo stop. Their train wins.

So after Naoto gets off the platform we see this:

So someone asks for Naoto’s attention but guess what? He doesn’t speak Japanese. He speaks English. 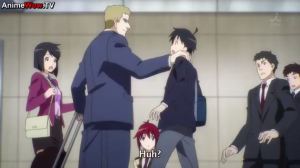 Oh I always love these types of parts in Anime because most of Seiyuu can’t speak English. They can do those occasionally Engrish words but not full out English. The only Seiyuu I know that can speak English is Sayaka Oohara, having passed the Pre-1st grade in STEP Test in Practical English Proficiency. I don’t really understand but apparently it makes her a fluent English speaker.

Okay did my research. 1st grade doesn’t mean like 1st grade school level speech. It’s the top tier of speaking English in Japan so that means that’s Sayaka Oohara is one of the most fluent English speaking Seiyuu

Back to the story, predictably Naoto panics but luckily someone comes by to help. 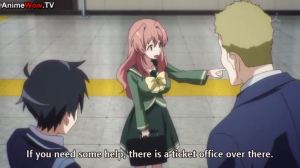 I’m shocked on two levels. One Koumi knows how to speak English and two Maaya Uchida has really good English.

So after we go back to the K-4 where Aoi’s writing out a apology letter to the criminal that she owned. Why did I use owned? 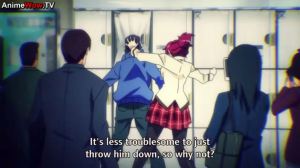 So after that they go to the cafe where the entire team tries to figure out what to have until Naoto and Aoi have an argument over Aoi’s constant snarking until the waitress comes.

I don’t know why I feel the need to say this but her boobs are pretty big but not as big as Aoi’s, Nana, and definitely not as big as Koumi’s.
Okay after some quick introductions on everyone’s side, we switch scenes to Naoto and Mari at some bench near the water.Wow this seems a lot like a date…

There ya go bro! You had her eating out the the palm of your hand and you blow it!

Oh he’s been doing this for awhile has he? It’s still creepy even if you think it’s cute, Mari-chan.

After a second of musing if he’ll be able to make a living as a member of the public safety crew, Mari brings up Aoi and wonders if she should be a member of the crew with the way she is. Now that’s a legit question but she says it very timidly. My shipping instincts tell me that she’s got a crush on Naoto! Now it’s a three way battle for Naoto’s heart. I’ve got my money on Koumi personally.

After that we flash to the next day and we see this. 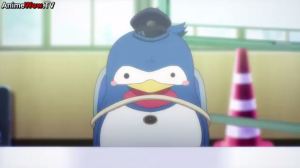 Vile fiends! They tied up the legendary penguin mascot of the National Japanese Rail Company!
Turns out that Nana isn’t going to be in today so apparently they need to put a stuffed penguin in her chair…anyway.

Koumi comes over to Naoto’s to give him some papers to sign. Simple right? Not when you have Moeness that rivals Mikuru Asahina! 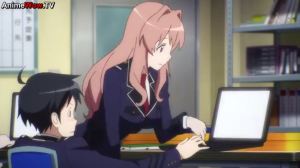 It’s so sad that she can do this just by leaning over. I’ve seen girls try way harder on purpose and get nothing. Maybe because they aren’t as hot Haruka Koumi? 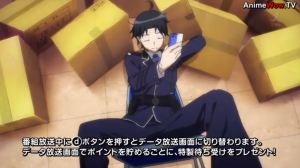 That’s what happens when you get too much hotness with so much boobs at the same time. You can’t take it and fall over.

Anyway turns out that Naoto gets a call from Mari that her friend, Kaori, is missing. Kaori…does she forget her friends each week and you have to reforge your bonds over and over again. Was she in an anime that was a romantic one in a way but had no romantic conclusion with any of the couples? Nope. Then she’s not from Isshuukan Friends.

Okay now that I’ve had my fun let’s get back to the story. 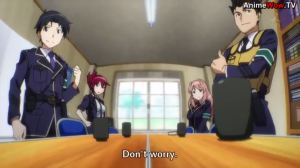 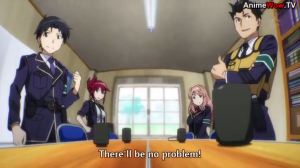 Wow he sounds all shonen hero on us but now the Rail Wars crew has to deal with an enemy more deadly and dangerous than any other.

Truly terrifying indeed…
So begins the look for something suspect via the reports. 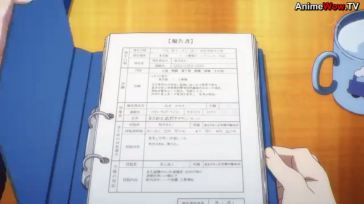 I’d have passed out a long time ago. Just looking at books like that would make me a bit drowsy. I’m serious and I totally tell you no lies.

So while they’re looking through the reports in the other room, the sexy Capt. Gonou is preparing to move out to deal with some radicals. Just another day as the head of the riot police.

There can only be so much good looks in one anime. Lucky we haven’t reached our quota here yet.

So after the Riot Squad leaves Nana comes in and asks if they’ve made any progress to which they haven’t. I don’t blame them. Looking through books all day. It’ll make a lot of people tired and unfocused.

So Nana asks if they want to add more groups to help them search the records but Naoto says no and goes to the bathroom…he’s going to come out with this huge idea. Why? Because all great ideas were born in a bathroom! I came up with most of my book ideas on the toilet…too personal back to the story.

Anyway after relieving himself, Mari comes to talk to Naoto about what’s happening with the case. So far nothing but they’ll keep looking because that’s their responsibility as members of the public safety crew.

After that the girl’s whose name I can’t remember comes in and asks Naoto to come with her. She’s the only flat chested girl in this anime that should tell you who she is. She’ll stand right out!

Then Mari’s cellphone rings and the other girl recognizes the ringtone.

Looks like they found her cellphone when one kid found and started playing with it. Don’t you hate that? Back when I was a kid, every kid and their brother asked if your phone had any games on it. Anyway they don’t where she was because the mother of the kid didn’t see where he picked up. So we’re at a dead end right?

Wrong! Super smart and super sexy Koumi works her computer magic and manages to find some sound files. Now this is a mess up on the studio’s part here. 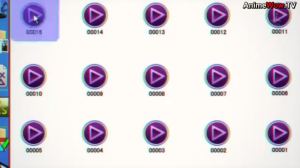 So they have like fifty files but they act like only one is important what’s up with that? Then Koumi just outright lies when she’s asked is that the only file.

Looks like there’s no need for fear because Mari taking a listen. Also in the background, Aoi and Naoto argue about how he should be able to figure out which station she was at from the smell. I’m not even sure if a dog could do that…

Then using her awesome hearing, Mari figures out what station Kaori was at last. 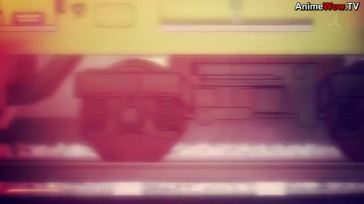 She’s got better hearing that my mother and she can hear a pen drop on a carpet a hundred feet away. Yes I have tested that and it’s true.

We flash to the station and it’s freaking beautiful. Things like this make you remember how beautiful Japan is. Also note that a large amount of Japan isn’t modernized because of the tough terrain. So they have a lot of nature where most countries would have cities.

After that traditional look around Koumi and Aoi ask how did Mari know which station was the right one to go to.

Dogs are deaf compared to this girl. This girl has a freaking superpower she’s so good.

So after that they begin searching starting with some warehouses near the sea. 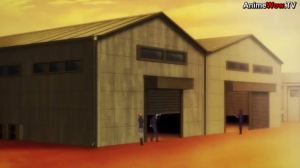 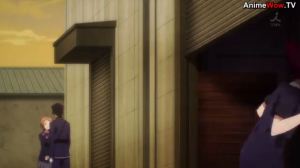 After a few warehouses Naoto and Mari hit the jackpot and find Kaori. 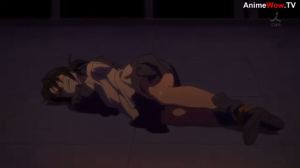 Wow they worked her over good. That’s why I try to avoid beatings. I can’t take them well…

So after they find her they cut off the ropes and try to get away but of course this is Rail Wars so there’s got to be a fight somewhere.

Unfortunately they didn’t show it. Darn. No more sexy Aoi fights.
So after that we cut to Nana and Gonou basically giving the wrap up and explaining that the crew won and saved Kaori. Also Gonou herself is really interested in their development. Sounds like some spots might open up in the Riot Police when they’re ready.
We close with Mari thanking Naoto for all he’s done.

And they end the episode with a salute.

All in all, I thought it was a good episode. I think that they could have amped up the tension and the interest level by actually showing the fight but hey. Whatever right.

I give this episode 6/10 for failing to follow through on what they sent up.

Looks like the next episode we’ve got all the girls in bikinis and the crew’s protecting a famous idol. I can’t wait.

Until next week,
Later Days