First up for the Autumn(or Fall if you just cool and cultured) Season is Shirobako!

Five girls chase their dreams. The story revolves around the everyday troubles and hardships that occur when working in the anime industry, and the results and conflicts that happen day-to-day among the group of girls.

AAAAAH! Sorry, my eyes and my brain are still feeling unbareable suffering from the first six episodes of Glasslip. Glasslip is a void of plot, there is no such thing as plot, logic, or even reason. It’s a place where thirty minutes of your time goes to die.

Put your snark about Glasslip sucking in the comments please. I can’t think of all the jokes by myself.

Anyway as you can see Glasslip left me with a bad taste in my mouth(and the mouth of anyone else that happened to see it) so I’m snarking to hide the pain.

Anyway we have Shirobako, the newest thing to come off PA Works’s floor. Now you are thinking ‘Deven, why are you reviewing a PA Works Anime right after Glasslip fucked over their entire image?’ True. There will be memes of what happens when a studio hires a lot of good Seiyuu and does nothing with their talent. It’s called getting Glassliped.

Anyway the reason why I decided to put this on my list is simple. I like the premise and I’ve got a backup this season if it sucks after 4 episodes. I’ve also amended my Drop Anime Policy to save me from stuff like this.

You’ve got until 1/3 the way through the anime to hook me in but if you haven’t kept my attention at the halfway point I’ll drop it. So basically if you haven’t gotten me by episode 4, it’s gone. If you slid a gem at episode 4 but it sucks at 5 and 6, I’ll drop you like a bad habit.

Anyway Shirobako is a first for me. I only know one member of the cast. 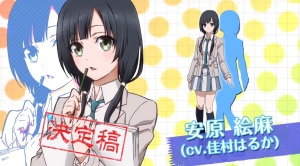 Haruka Yoshimura known for her major role in Spring 2014’s Akuma no Riddle as my beloved Kouko Kaminaga will take up one of the lead roles! Good for her! Hope she doesn’t shoot her foot with by getting in bed with PA Works…

So I’m a bit suspecious about Shirobako. I hope that PA Works comes through on this one. If they don’t I’ll start saying when an anime doesn’t make sense it was Glassliped.