Hmmm when I thought of seiyuu that went to the Dark Side I’d never imagine it would be Nao Toyama. Great voice for a sexy villainess

Note: Nao Toyama is the voice of Chitoge Kirisaki from Nisekoi, Yuhiko Kousaka from Love Live, and the little sister from Glasslip…No one cares about Glasslip though

So we come in on Arata getting up for his day and what does he have in his bed? 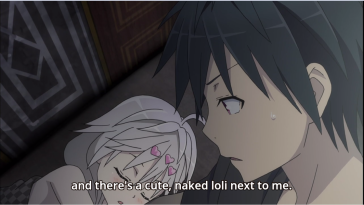 I wake up with creaking bones and morning breath, he wakes with two naked girls in his bed. Can he get more lucky? Well ain’t this a classic harem situation. I know how this is going to turn out. Guy says that this isn’t how it looks. Girl screams and calls him a pervert before she slaps him. 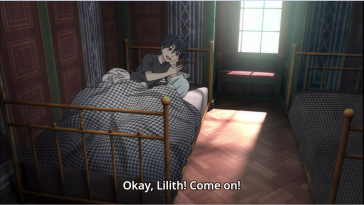 All Hail Brother Arata! The true king of Harem Protagonists! When confronted with this situation, he shone brighter than any other. Arata is definitely one of my favorite harem protagonists now. And it’s a very short list.

This scene legit had me laughing and crying all at the same time. Finally a harem protagonist not afraid to say that ‘Yeah I want all the girls in my harem and there’s room in bed for all of you’

Well probably not that bed because that’s a twin and there’s no way four people be able to sit on that one.

Anyway I can see this is going to be a good episode and we’re only in the first minute of the episode!

So after the opening(Damn it I can’t wait until November 19th to download ZAQ’s Seven Doors and Yumi Hara and Aya Uchida’s Beautiful Sentence), we see Arata staring at all the girls in their gym clothes while Yui clings to his arm.

Just so lucky. The tears man, they keep falling!

So Arin gets jealous and gets on Arata too but there’s no need to worry Arin-chan.

Deven collapses
Inner Writer: Deven, wake up!
Deven: The harem awesomeness! Too much! Trinity Seven is as if the god of harem anime created this himself to give to the worthy lovers of the harem genre and…
Inner Writer slaps Deven
Inner Writer: Yeah, yeah, yeah. I heard all this stuff when you watched Sekirei and Sekirei: Pure Engagement for the 12th time. Now get back to the review, idiot! We still need to do work for Love Live School Idol Festival! I want that Kotori Card!
Deven: Fine

As you can see my Inner Writer’s a Kotori fan…I plan on beating that out of him soon and reminding him of the true love of Nozomi!

Anyway Arata’s confused why Mages have to take PE but not confused enough to not appreciate Lilith’s bouncing boobs as she runs. 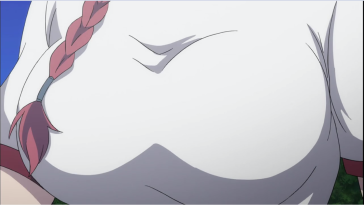 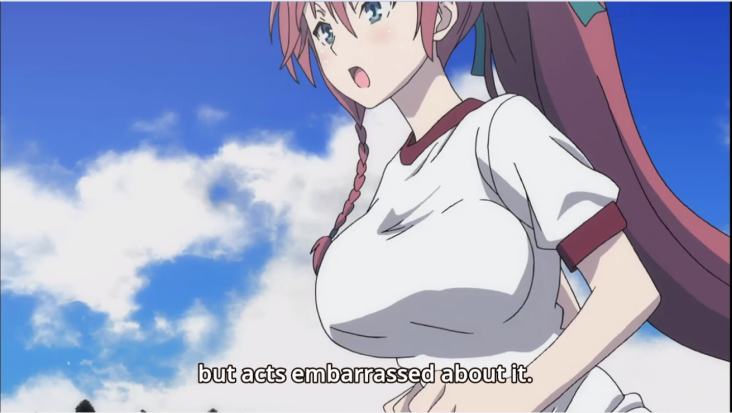 Question: If Lilith’s the teacher, why does she need to take PE with the rest of the students?

So Mira and Akio show up and Mira asks Akio to kill Arata for his impure ways. Noooo! He’s the one that has been promised to us!

Anyway Mira sits down and says to Yui that while things worked out with her and Arata’s Breakdown Phenomenons, she still tells them if they go out of line again, she’ll bring them down. 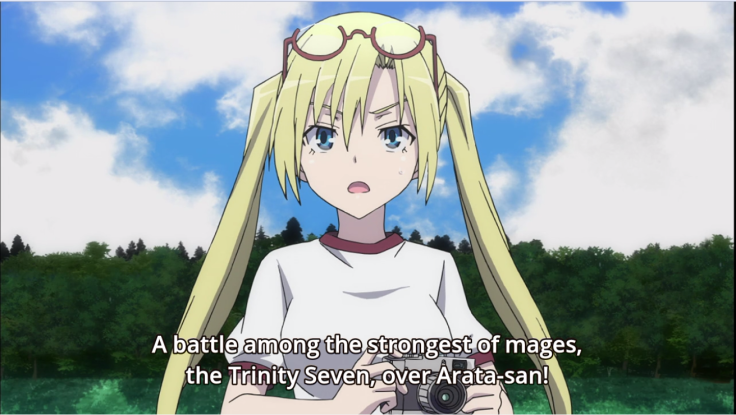 So now it looks like there’s a harem fight over Arata! Lilith tries to stop it but looks like Levy(who legit came out of nowhere) and Akio want to go out at so there’s no stopping them now! 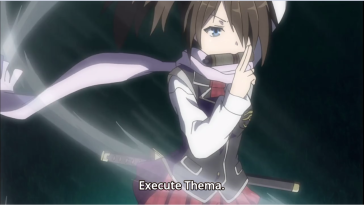 Arin jumps in too! 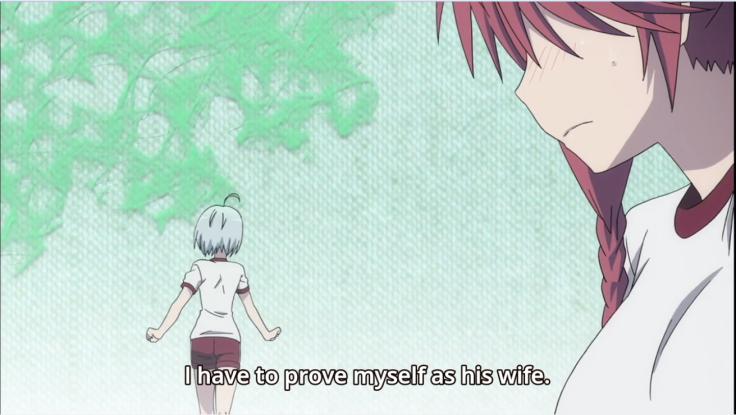 I love this girl so much.

So everyone’s going all out but there’s one person taking pictures and another person just realized that they’re fighting over Arata! 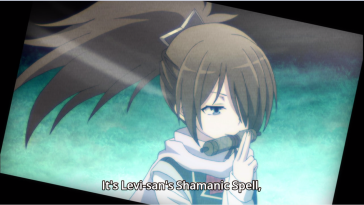 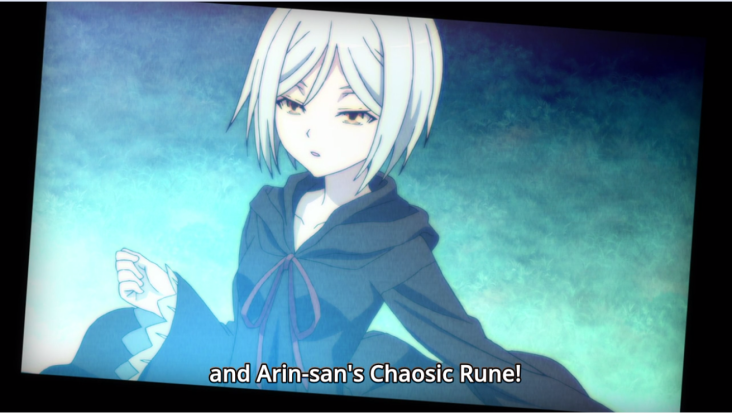 Newshound to the end I see. 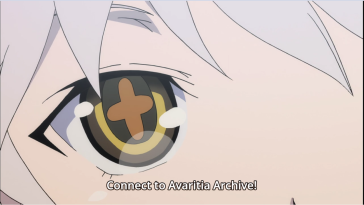 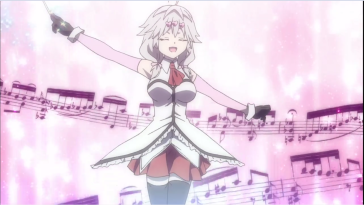 She looks like she’s a conductor in a symphony.

So we get a big flash of light and Arata ends up with Mirajane…I mean Dream Yui.

What happened to everyone else though.

Oh so where are they? 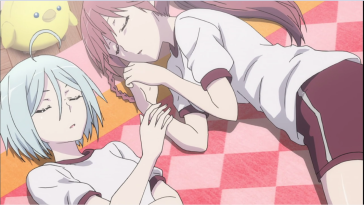 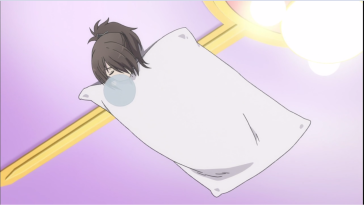 First things first, I don’t give a damn if it a dream! How the hell is Levy sleeping upside down on the ceiling?! That doesn’t even make sense in a dream!

Anyway we see that Mira isn’t asleep. Looks like she use Gehenna Scope to reflect the magic away from her. Now that’s a good magic. She blocked two top tier magics away from without even a care.

So after Mira leaves, Yui and Arata get into a conversation about friendship and Yui explains how she felt so lonely inside her dream world. She’s grateful to Arata for giving her the jolt she needed to wake up and finally have friends in the real world.

That’s just sad. She can have anything she wants in a dream just by thinking about it but the one thing she can never have is friends. 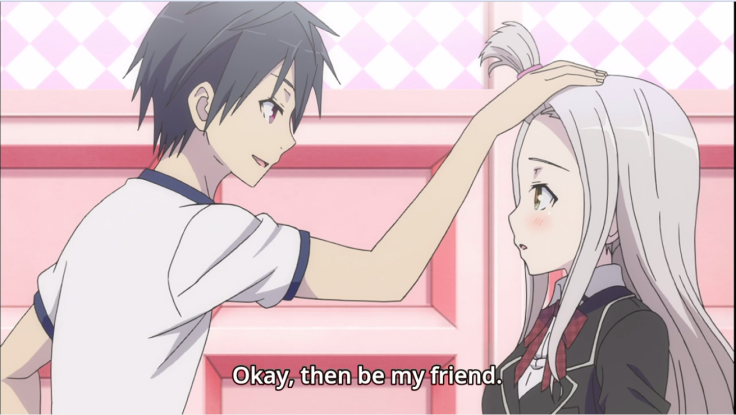 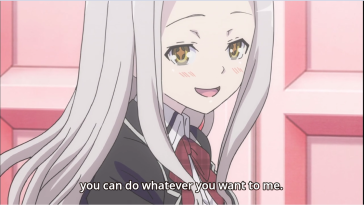 Hmmm friends with benefits? Right off the bat! Lucky dude.

So with that Arata goes for the move but Lilith tells him to stop even while she’s sleeping.

So Arata says it’s time to return but before that Yui does this. 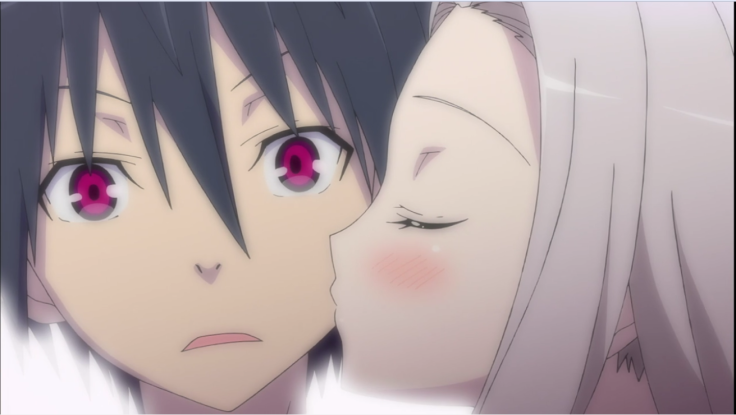 So on the outside world, Yui and Arata are apparently still asleep and Lilith, Arin, and Levy are awake and commenting that now Arata has met six of the seven members of the Trinity Seven but they have no idea where the last one is.

So after that we go to Mira in the shower. 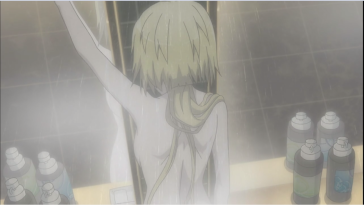 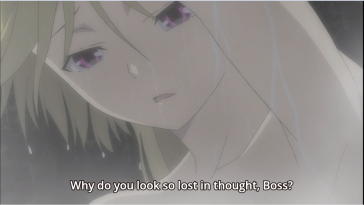 Look at her…not like that. Not everything I say is going to be about how cute the girls look. I’m deeper than that.

She’s leaning against the shower with one hand. That’s pose of deep shower thinking.

So to knock her out of her thoughts, Akio comes in and slaps gently on the rear. Yuri action!

So Mira and Akio have a conversation where Akio comforts about the feelings she’s been having about her face of being the leader of Grimoire Security and the person she actually is. They wonder since they’re been so many more Breakdown Phenenmon lately. Mira starts to feel burned out.

You can kinda expect that. Her job is basically killing people to protect the greater world. She may be doing good but it still would take its toll on her emotionally. 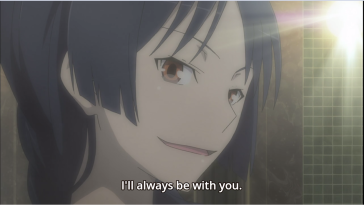 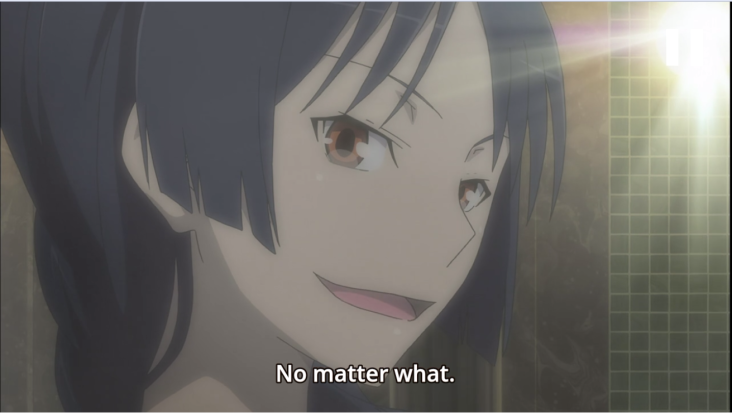 Don’t worry Mira. You don’t have to go it alone. You’ve got a good friend by your side.

We switch over to another scene and it looks like someone broke into the school. 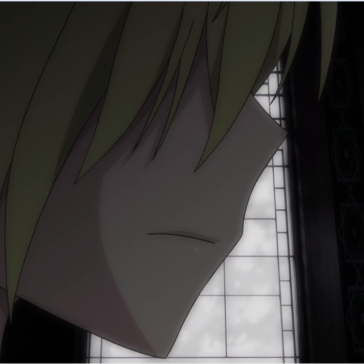 Hmmm Selina’s on the dark side now. It doesn’t fit her.

So the next morning, everyone’s looking at the affer effects and Mira and Akio question if it was Arata or Yui but they didn’t do it.

Then Mira say that the magic around is similar to the magic they once saw in a library. Library?

So we switch over to Arata with Arin, Levy, and Yui. Arin explains that the ghost of one twin girl is walking through school. Oooh. 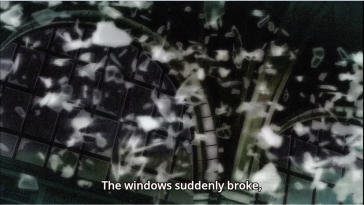 Oooh and she’s still missing. And even still on rainy days, the girl is still seen walking around the school.

So being very protagonist-like he goes to investigate and runs into everyone including Selina. However the library gets changed into the Eternal Library. Someone’s making moves.

Selina? No the clothes and the voice are different. And the boobs are huge!

She’s too cute for words. She’s also Evil Chitoge Kirisaki and Evil Yukiho Kousaka! I knew Chitoge would go to the dark side…it’s a joke people. They’re all voiced by Nao Touyama. Although after playing two little sisters and tsundere, I didn’t expect Nao to pull off Liese’s sexiness so well.

Back to the story, Liese freaking teleports behind Lilith and Mira tries to steal their magic but Levy and Akio make their move.

And everyone explains that Liese became a Dark mage after going into the Eternal Library.

I hear you but when you have this on screen it’s hard to stay focused. 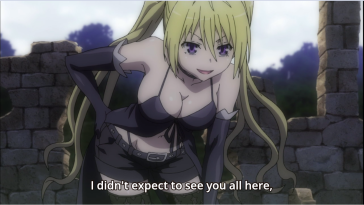 Sorry what? I couldn’t hear over her hotness. She’s like the Kurumi of this anime but blond haired.

When Mira asks why she betrayed them and studied forbidden magic, she summons her grimiore which looks like a freaking Acer tablet. I kid you not.

See. Then explains how she trained and managed to turn herself into a demon lord candidate.

The episode ends with Liese grabbing Selina and sucking her dry of magic and she intends to do the same to everyone else. 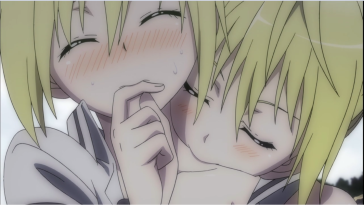 Now that was a good episode! Good fanservice and the action was good. I can’t wait to see what the anime does with Liese in the next few episodes.