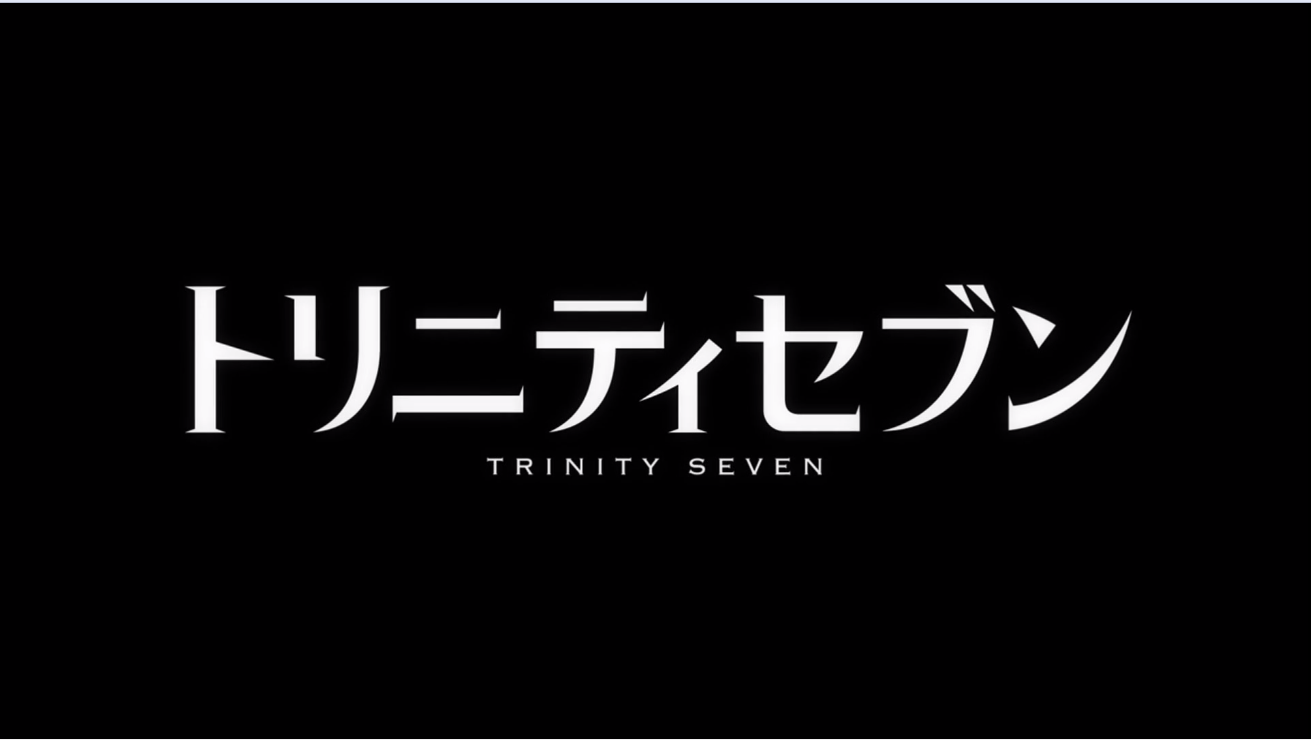 Even the greatest harem protagonists, the ones that dodge all the classic pitfalls, have to fall for a few of them occasionally. Without it, it’s not a true harem show. Also the background music here is awesome!

So we start the episode off with Arata studying with Selina, Levy, and Yui and Lilith is all confused. After Arata doesn’t work hard? 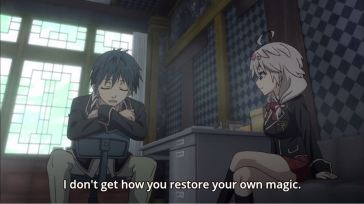 So what happened to Arata? 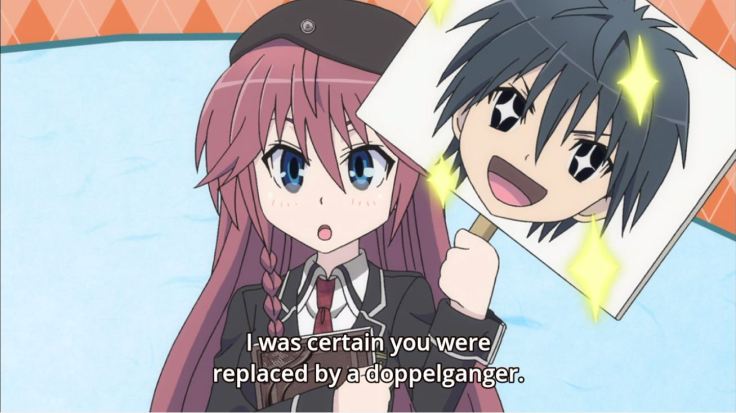 That works…let’s leave that one as possible for later….like two hundred years in the future later. or could it be possible now? They are in a magical world.

So after the opening, we have Arata, Lilith, and Sora in the same room and Arata’s explaining that he wants to save Liese as soon as possible. That’s why he’s putting his nose down in the books.

We all know he wants to save her so he can get those hands on her massive boobs. Shoot. I’d be studying day and night to do that.

Sora says that he’s really close to mastering Logos Art too but Lilith tells him again that there is a risk with learning too much to fast. He could run the risk of becoming a monster, one far more powerful than the Code D Dragon that they fought to save Yui.

Sora keeps telling him that but he doesn’t care. He’s going to save Liese no matter what!

I know he’s a good guy and all but I swear a lot of Arata’s actions are driven by Hijiri. Poor Ayaka Suwa, still no lines and we’re on the eighth episode.

Anyway Lilith starts to say something but then she and Arata are called to the Headmaster’s office.

Once they reach Arata just goes in and bumps into Mira. But we have to remember this is a harem comedy so it’s not going to be any normal bump. 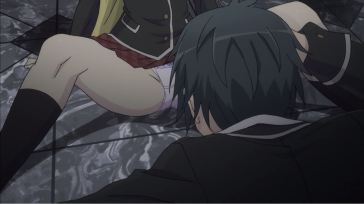 That’s it! Count on my man Arata to notice the little things.

So Mira sends Arata flying through the roof. Ah a classic harem gag.

So after Arata returns, the Headmaster makes Arata the Security Committee’s Second in Command and he plans to send Arata, Mira, Akio, and Lilith to check out some strange happenings at Royal Liber Academy. Turns out they were completely wiped out while our heroes were fighting against Liese.

They leave in two days and now Lilith needs to get Arata up to scratch.

So it’s time for some dedicated tutoring from Lilith!

Is it too late for me to join the class?

But the private lessons gets broken up by…Levy, Selina, Yui, and Arin. Lilith gets all flustered and makes snarky comments as everyone enters and that gets everyone laughing so they start calling her the ‘Comeback Alchemist’

So Arata asks a big question… 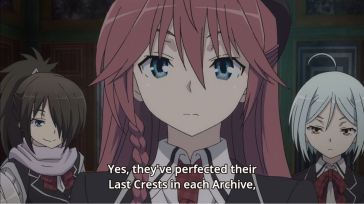 Anyway then they go through a little slideshow of all the girls and their archives. I’m willing to show you that too! 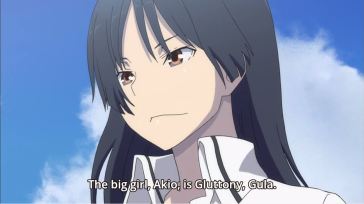 So after that Arata’s got to wonder. What’s Lilith’s archive? Well if you’re keeping track at home we’ve got:

Hmmm now if my intensive training into the Latin language isn’t wrong, which it isn’t because Latin is too awesome to not have in the book you’re writing, the only one left is Luxuria or Lust and there’s only one member of the Trinity Seven left!

So it gets down to forcing it out of Lilith, you can just see the comedy in her face. 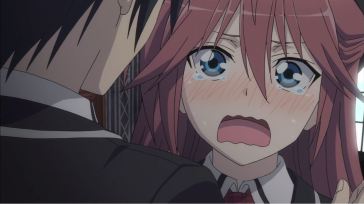 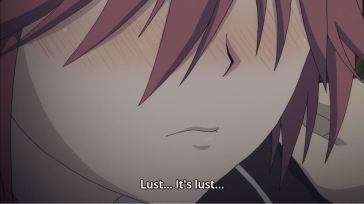 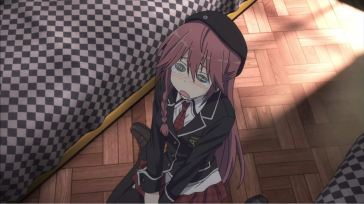 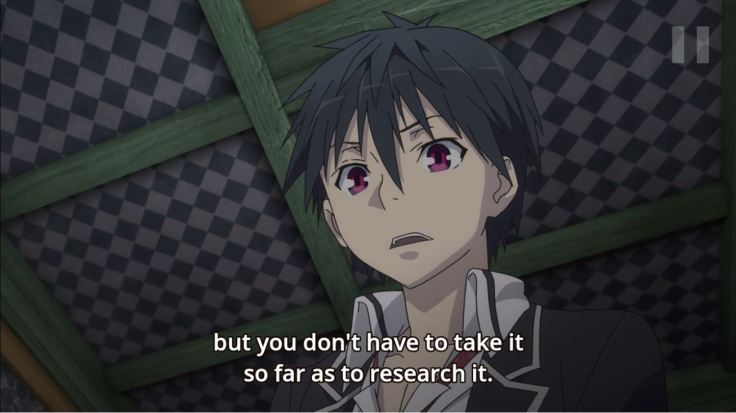 Disagree! That’s all she should be doing!

And Sora agrees with me. 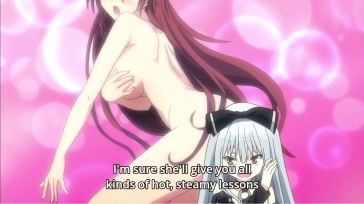 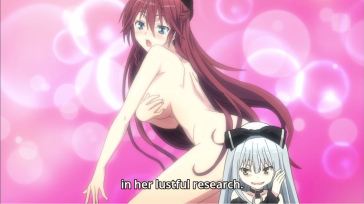 Yay! Is there room for one more! Arata’s happy but Lilith’s had enough and by enough I mean this. 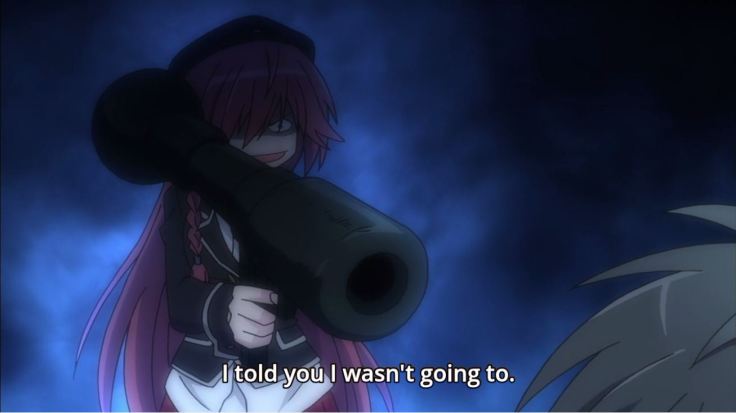 Wow that’s a big gun. Lucky it isn’t pointed at me!

So anyway Arata goes on a thing about how a person’s Thema and Archive is the furthest thing away from them. So using the Luxuria Archive actually works well for Lilith since she’s actually a prude.

So with that Lilith and Arata begin their lessons! All right!

So they have a quick little montage of their lessons, and afterwards Lilith falls asleep and Arata puts a cover on her.

Then Arata crashes in bed but Sora gets on top of him. They banter a bit about how he likes that she’s a girl now because she’s all warm and soft now.

Then as if someone planned it that way, Mira and Akio come in and see Sora on top of Arata. 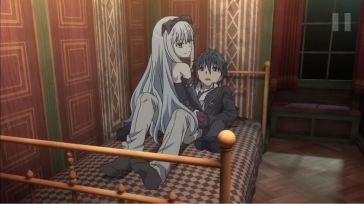 See this is why you wait until late at night before you do anything ecchi. You don’t want anyone to walk in on you.

So turns out that Mira and Akio came over to check if Arata was really studying. Well that’s why Mira came. Akio came because Mira didn’t want to go over to a boy’s room alone during the middle of the night. What would everyone think?

After that Mira and Akio explain the situation about Royal Liber Academy. They are a school on the level with their own and its their mission to figure out how and why it was destroyed.

But you know what’s the coolest part! They’ll be teleported there! Turns out there’s a whole system of teleports to places all around the world.

What do you think brother Arata? 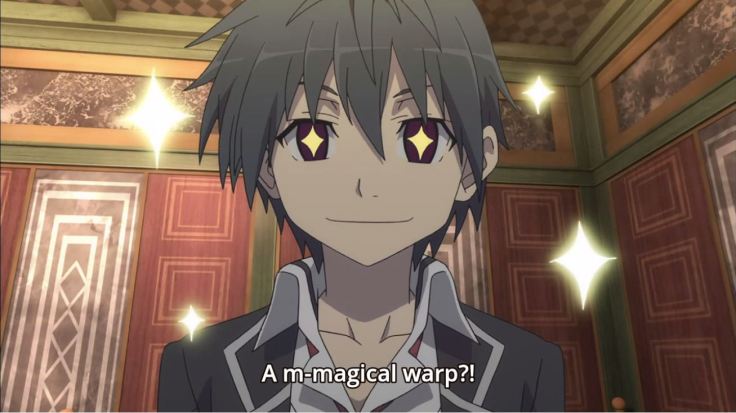 Once again the truth is said by Brother Arata and king!

But little Sora gets serious. 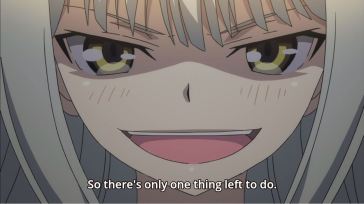 Indeed. The truth is also spoken by Brother Arata’s grimoire!

So Akio starts to talk about Mira’s showing off some boobs but Mira gets all flustered. Then a roach comes crawls out and Mira gets surprised and it pretty much ends like this.

Then you know how Lilith’s going to go! 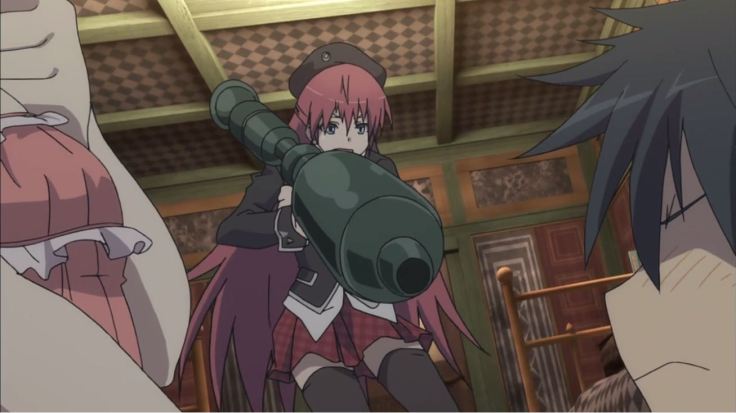 She’s firing her laser! That’s for you guys that like DragonBall Z the Abridged Series.

Anyway we flash to the next day and it’s Arata and Lilith finishing up their studies. For a job well done, Lilith takes him and the other members of the Trinity Seven…well except Mira and Akio to a hot spring that’s apparently near by. 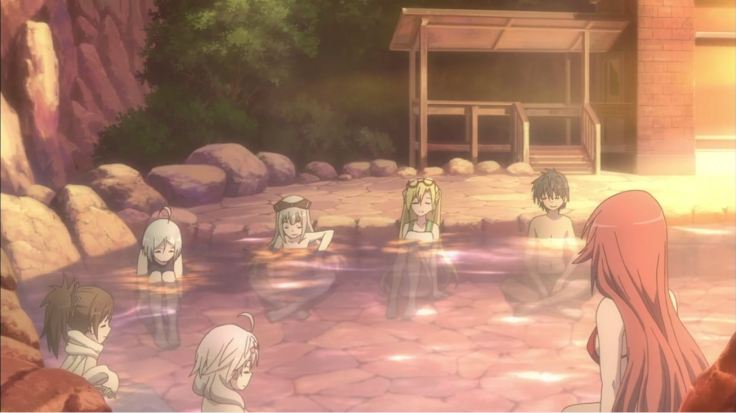 So Lilith takes Arata down the river to see this awesome sight of the city below them.

They even start splashing each other in the water. So cute but then Sora throws a leaf at Lilith’s bikini, cutting it off. And we know how this is going.

So the next day everyone’s ready to go on the mission but someone interferes with the transport and Arata, Sora, and Mira get separated from Lilith and Akio.

And someone appears…behind them only to leave in a second. 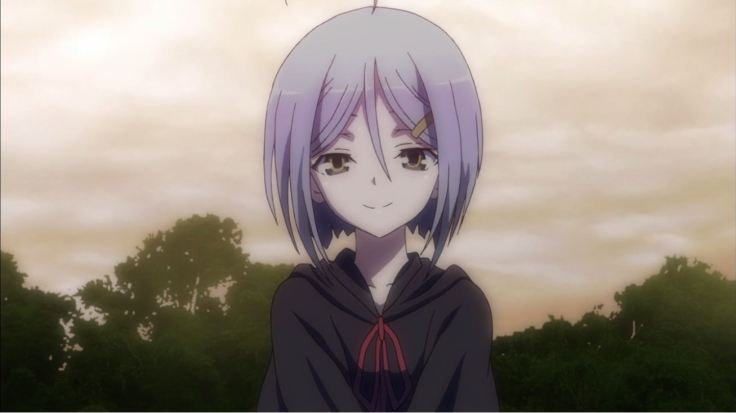 The ending’s changed again but it’s only for this episode then it will go back to Restart the World. The ending is Heaven and Trinity Seven by Mira and Akio.

It’s a pretty good song in my opinion. I can’t wait until Restart the World and this one come out on December 19th.

So that’s all I’ve got for you. Looks like Trinity Seven is well on it’s way to being one of the top harems of the year.Hmm maybe I should do a post on that. I’ll be pondering that. The top two would defintely be between Trinity Seven and Date A Live 2 though.