So Nozomi-sama got transfered to a different temple and ended up being part of Isuca? What’s up with that?

So this episode of Isuca starts off with Shin(yeah Shinichiro is too long to write so we’re just going to call him Shin) finally finishing cleaning up Sakuya’s dirty as I don’t know what house. But he’s still got some work to do like…

Putting together his room…what happened?

Turns out that Nadeshiko moved all his stuff over to Sakuya’s place without telling him. Of course Sakuya gets made as a tsundere would, saying that a girl living with a guy he might try and hurt her.

He says it with that I’m not into you type of sound. And just to make sure that everyone stays unmolested Tamako’s going to be staying too.

I don’t think it’s safe with him. Maybe he can do like a lot of people and forget she’s a cat. He might wanna…I need a cat pun that relates to the situation … I can’t think of anything.

So we just flash to school where all that is explained through a flashback then it’s afterschool and Sakuya, Shin, and Tamako get into a fight with a tree spirit.

You know I have a cure for tree spirits. It’s called fire. It works 100% of the time and it also works on a variety of matters.

But good old Mother Nature’s not all bark and no brains and takes a hostage. Oh no a hostage. I guess you better put down your bow, Sakuya. You know what they say ‘Fool me once, shame on you. Fool me twice, shame on me’ If using hostages is all it takes to put her out of the game then she needs to get a new playbook. 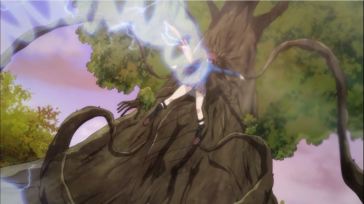 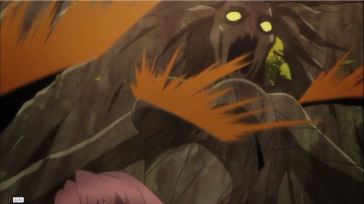 Looks like Temari, the ninja lumberjack lost her weasel. Come on that’s a good Naruto joke.

Oh gosh she’s hot! And she looks like Nozomi. Shoot. Put her hair in some twintails and give her some green eyes and they could be twins.

She still looks cute as a button but now she can’t do the Nozomi twintails during lives now. I like her new look but can she grow out her hair in time for the next live?)

So they head back to Sakuya’s house where Suseri explains that she wants Shin to come back to Kamakura with her. Then Nadeshiko explains that Sakuya is the technical head of their family and won’t be the true leader until she and Suseri become adults. However there are a lot of people that are on Suseri’s side so she’s not very popular. Tough.

Hmmm I’d choose Suseri. She’s hotter and she’s not a tsundere with more tsun than dere.

As to why he’s got to choose…because Shin’s got a massive amount of Life Force and can recover fast he’s a good source of Life force these girls. So when confronted with a choice, he takes a book out of Kodaka Hasegawa’s book and runs away to the bath.

Poor boy doesn’t even know this is a harem anime. They don’t have any qualms about going into the bath with you. Look.

He goes from poor boy to lucky boy! I assume he must be suffering right now, beautiful girl with large boobs naked in the bath with him.

Poor guy must be losing his mind right now. Then something happens. I can’t really understand it because the censor is white and things are hazy because of the steam….wait a second I get it now. Come on Arms. You threw his face down below the belt again! Where’s the subtlety!?

And apparently she knocked him out…I want to believe it’s because he hit his head on the bathroom floor because the alternative is too perverted even for me to say.

So the next thing we know he’s in the car and they’re driving back to Kamakura. He’s got clothes on that means she must have dressed him… this girl…

So she kidnaps him and then she says that if he basically becomes her mana battery, she do anything he wants starting with finishing up with what they did in the bath.

Hmm this actually requires some thought. On one hand, she’s hot and no tsundere, on the other hand she’s so emotionless and clinical you probably feel like you’re with a doll.

So it doesn’t take long for something to go wrong in this case they get trapped in what looks like a bridge but it’s a loop so they can’t get away.

And with today’s gas prices they’ll always be ready for a fight! Gas is really low in my area. It’s only $2.39. Really cheap.

So the driver tries to fight back and I’ll let you guess what happened:

2. Because he has no name he dies.

If you think two then you’re right in this show’s demographic!

And he gets eaten Attack on Titan style. Suseri tries to beat it but only after two shots she’s asking for power from Shin.

Slow down girl. You only fired two shots off. Let’s wait a bit before we start the lip locking.

So turns out that Sakuya and the others managed to figure out what was going on and came to help out. Sakuya shot an arrow at the car’s heart and it looks like it killed it.

Side Note: I love the fact that no one has mentioned that the driver just died like ten seconds ago. No name no love, right?

So right when they think they think that they’ve gotten away, a fire starts and the car comes back to life and traps them.

Of course this is a harem anime so something perverted has to happen. It’s like the rules.

Come on Arms. How many times is that going to be shoved his face?

So with their lives in danger and the fact that he can’t turn around or reach anyone else, Shin kisses Sakuya to give her a boost in power.

And with that Shin gets another burst of memories. I’m starting to think every time he gets kissed he gets memories for humans and true names for the Yokai. Just a thought.

So after the battle Suseri leaves back for Kamakura but it’s easy to see that she’ll be back. After all she’s a part of the harem now.

I’m slowly getting into this anime. It’s not the best harem anime mostly because it does what all standard harems do. It’s relying on the female cast but at least Tamako, Suseri, and even Nadeshiko are more interesting than Sakuya’s too tsundereness.

I’ve got one more episode to decide if I’m going to stick with one until the end of the season. Based on this episode it’s tied. Episode 1 was horrible and Episode 2 was pretty good since it was more focused on Tamako. This episode was half and half.

Anyway next week’s episode will be the decider. Let’s hope that it comes through for me.

Until next week,
Later Days