I have to know damnit! Why don’t you choose Tamako?! A Cat is fine too, Shin!!!

Does anyone know what I’m talking about? Anyone? Laugh in the comments if you get the reference.

So in this episode we finally get the truth of the Shimazu family as well as the reason that Sakuya didn’t want Shin to find out her true name.

So during the episode while at school, Nadeshiko explains that Sakuya runs the possibility of losing her shot at being the heir because remember when you learn someone’s true name and say it they are under your command. That just doesn’t work for someone that’s the leader of a family of Yokai hunters.

Rejoice Shinchiro! You screwed up Sakuya’s one chance at happiness.

So after school this is one thing that gets me.

There’s no subtext. She ran right at him naked. And…I can’t even call him my man because he can’t even come close to Arata from Trinity Seven! He isn’t worthy to be in the same room. Still an okay guy just not as good as Arata.

Still why can’t he like Tamako? A cat’s fine too!

As a harem protagonist he’s borderline legally bound to say no but still…working with Suseri would be better for him on his side. She’s hot, physically…attractive(she’s freaking stacked for someone’s that’s only around 15 or 16), and she’s relatively calm. If you cut out that, reckless streak she’d be perfect. However I like the fact that Shin’s sticking with Sakuya despite all the benefits he could get from Suseri.

So after school Shin and Sakuya go home but she gets frustrated with him following her but finally decides to accept the current events.

She explains her past about her family. Turns out that she’s kid of a Western Mage and a woman from the Shimazu. The Shimazu to make sure that they keep getting more powerful in their magic and techniques…they keep in it the family. 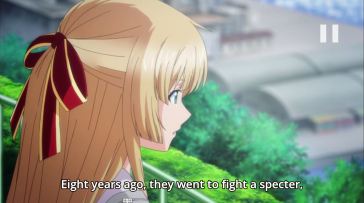 So once they get home, they get this cool mirror. Wait a second…how did Tamako sign for it? She doesn’t have a last name!

Sakuya and Shin get pulled in and have to fight against the darkness inside Sakuya’s heart. Sakuya has just had it rough. Hated by her family, her parents missing, no one will tell her what happened. She’s always been alone…

This is actually a pretty good fight. It actually shows a lot of Sakuya’s power and her real feelings. It’s definitely an internal battle. The actual attacks mean very little. This battle is more so Sakuya can accept the hatred she has in her heart for the head family as well as admit to herself that she’s alone. 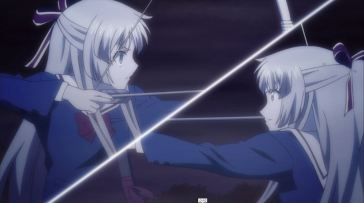 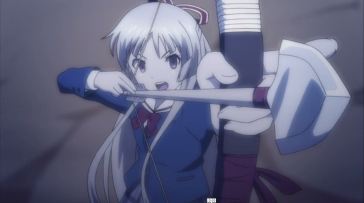 Sakuya manages to win the fight by Shin kissing Dark Sakuya and finding out the Spirit’s true name.

After that they get kicked out of the mirror and walk home. Shin swears that he’ll help Sakuya find her parents. Nice of him. And the big part is that Sakuya starts allowing Shin to call her by first name. That’s a big step in friendships in Japan.

I think that we have something here. Not a legendary harem anime but something that has its own niche. Not super good but something deserves at least one view.

So we’ve got something good out of this episode. Let’s hope that we stay on this road.