It seems that we’ve got a shift in the dynamic in the show. Now we’re seeing more of Kirin cooking

So we got this at the episode…

Learn from the master! So after the opening we have Kirin throwing volleyballs at Ryo. Why? Preparing for field day!

Ryo asked for a crash course so she’d be ready. Let’s see how she’s doing. 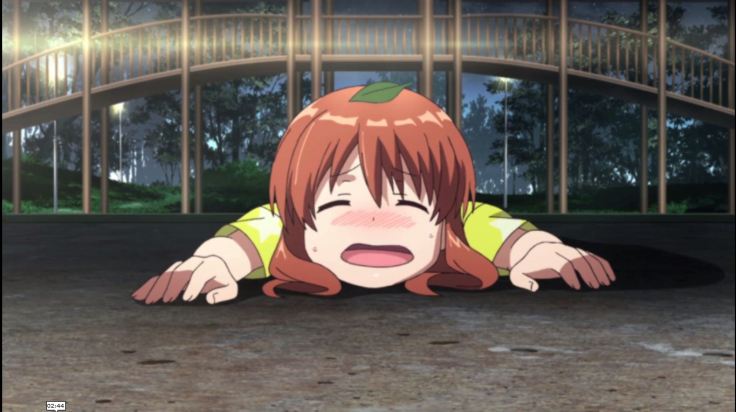 It’s okay Ryo-chan. You weren’t meant to do physical activities. You were meant to be cute and cook cutely. 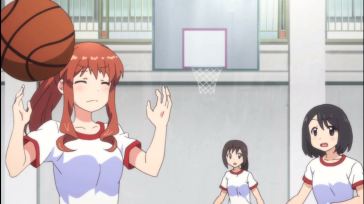 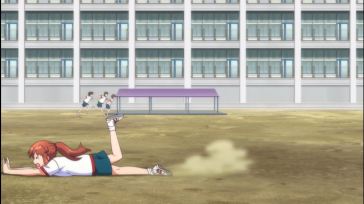 Hmm I see why you hate it. But you were soo freaking adorable.

So while Ryo can’t do field day it gives Kirin something help here with since apparently she’s very in shape. Wow all this time I thought she was short and flat chested. Turns out she’s just compact…ahahahaha that’s what all short folk say.

Anyway turns out that Field Day is going to be on Sunday so that day Ryo isn’t going to be going to cram school. So Kirin’s going alone…wait Shiina’s going to be there.

I’m beginning to see not really arcs but more of shifts in the anime. The first part was Ryo and Kirin getting to know each other. That was the winter. Then during the spring and summer they got close to Shiina. Now it’s the fall, now the three of them are close enough friends where they want to cook for each other.

It’s also showing a shift in Ryo and Kirin’s dynamic. It used to be Ryo doing all the cooking but now in the last two episodes, Ryo hasn’t cooked at all. It’s been all Kirin or Shiina. I think this is good personally.

Anyway we move to the next day at Ryo’s school.

Aw her middle school is way better than mine’s was. They tell her that starting this year the students will have to bring their lunches for field day as opposed to in the past where the school gave them lunch.

Looks like Ryo’s going to have whip up one of her awesome lunches.

They aren’t that far off the mark…

So after school, we see this lady… 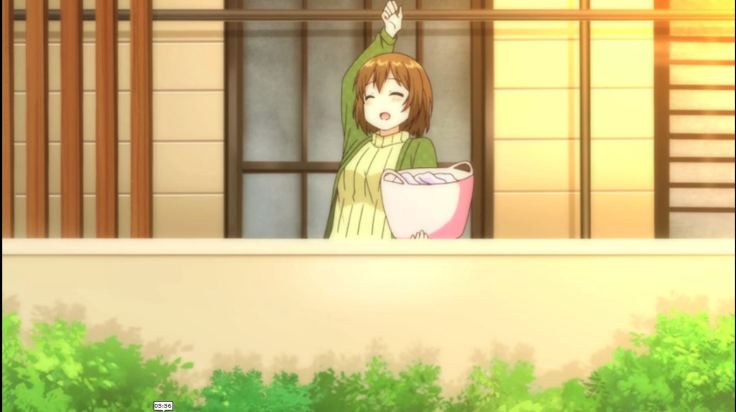 Who is she damn it!? It’s been eight episode and we still don’t know nothing! She just appears in between scenes.

Anyway Ryo’s home, looking at the letter they sent home explaining the lunch thing. She flashs back to when she was younger and her grandma made her lunch for field day. 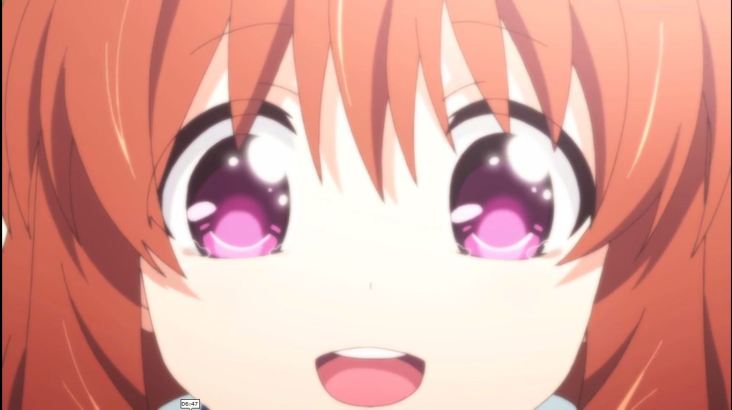 So remembering that Kirin offered to make her lunch, Ryo makes a list of the things that she wants for lunch. However she realizes what’s she’s asking for is a bit too much for someone that’s still learning how to cook so she throws the list away.

Why is it always that people find stuff like this at the middle of the night going to the bathroom?

So the next day instead of hanging out with Ryo and Shiina, Kirin heads straight back home. 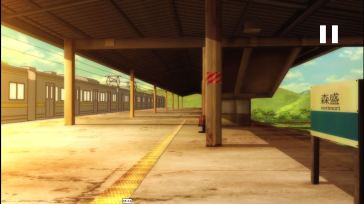 I don’t know about you but I wouldn’t be rushing home to this. Shoot I’d stay in Tokyo as long as possible. I think she might live in Hiroshima or somewhere like it. Mostly because it takes only a few hours on the bullet train to get from Hiroshima to Tokyo.

I’m probably getting this from Suzuka but hey I could be right or wrong so don’t quote me on that.

So Kirin talks with her mom about Ryo and her grandma and turns out that Kirin’s Mom is Ryo’s Grandma’s niece. So…let’s see…

If Kirin’s Mom is Ryo’s Grandma’s niece that makes Kirin’s Grandma and Ryo’s Grandma sisters. So Kirin’s mom and Ryo’s Mom and aunt are cousins and that means that Kirin and Ryo are 2nd cousin.

So Kirin says that she’s going to ask her Dad to help her learn how to cook all the stuff Ryo wants. Wait your mom’ sitting right there. Why don’t you ask her?

So when Kirin gets to Ryo’s place, she does this…

EH? But Ryo’s not ready for such a beautiful act such yuri.

Turns out she’s just changing into her running clothes so they can practice for Field Day.

And when they go into the supermarket, Kirin reveals that she found Ryo’s lunch list and she’s going to make everything on it even though she’s not very good at cooking.

Just trust her Ryo. That’s all you need to do.

So once they get home, Kirin kicks Ryo out of the kitchen so her lunch can be a surprise. 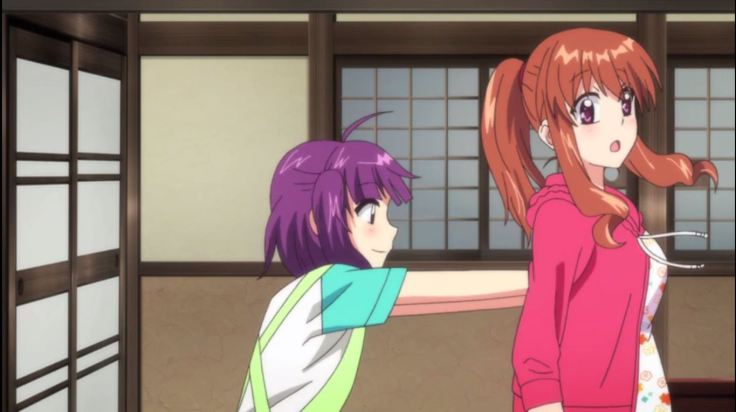 And the next morning, it begins with the 3rd year 100 meter dash…what’s a meter? I’m from America. We don’t do your fancy metric system!

Ryo starts, remembering how Kirin helped her and even made her lunch for her. With that Ryo feels like she can do anything! 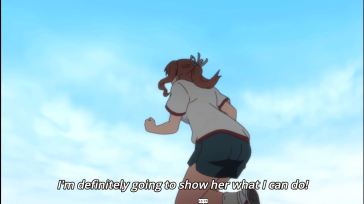 But she couldn’t and dead last. Now that’s funny how they made it look like she was winning but then we see that she epically failed.

So after the race, one of Ryo’s friends notices that she looks tired and turns out that Ryo stayed up all night to make sure Kirin didn’t hurt herself while cooking. 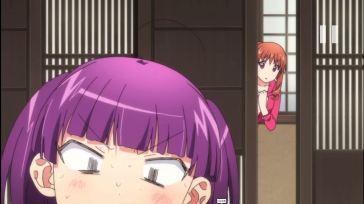 Aw that’s nice. And now it’s time for lunch so we’ll see if Kirin failed or not.

So while her friends are wondering who made her lunch, we switch to Kirin and Shiina. Turns out that Kirin messed up alot while making Ryo’s lunch so she and Shiina are eating the messes.

Then we switch back to Ryo where they start eating. 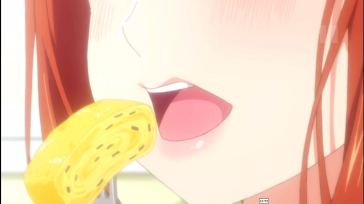 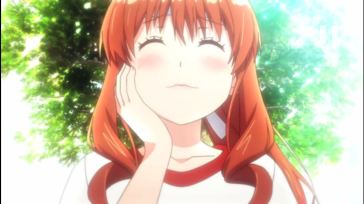 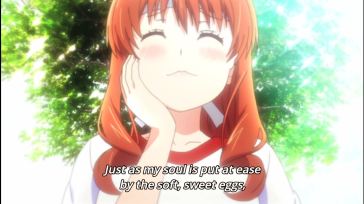 So then after seeing all of cute reactions, her friends want to have some too.

Noobs. You can’t do sexy eating without practicing!

It only tastes good to Ryo because it was made by someone she loves. And it tastes so good that she does this.

Now that’s nice but this is funny. 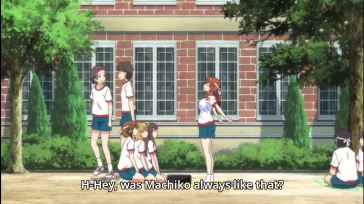 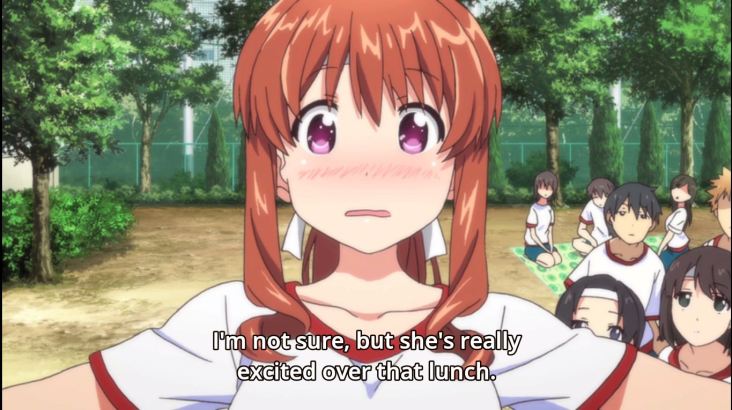 I think that Ryo has some issues with halluncinations…

So after the Field Day Ryo meets Kirin while she’s walking home and Kirin apologizes for making a horrible lunch. But Ryo says that it was delicious.

And the episode ends with Kirin leaving for home while Ryo thanks her for the lunch again.

I can’t wait for the next episode. We’ve been seeing alot of a change of the dynamics between the girls. I hope that we see a bit more of Shiina next episode.