Let’s Look: Isuca Episode 5: From Tsun to Dere: The Story of Sakuya Shimazu 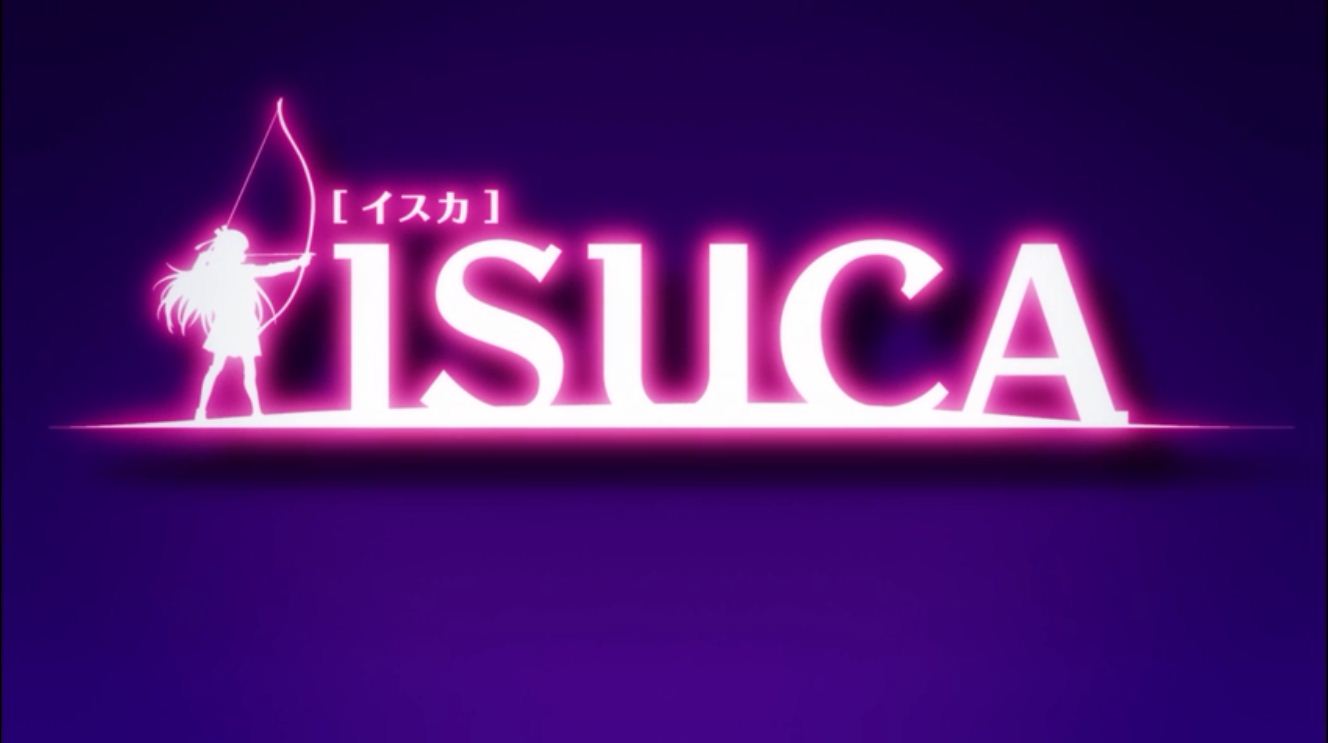 Slow it down, Sakuya! You can’t just change it up all quick like this. You’ll give the viewer a wicked case of whiplash.

So we start off the episode with Shin just casually walking home when Sakuya turns up. Apparently she was waiting for him…in the most tsundere way possible.

After that we see that Suseri and her handmaiden whose name I can’t remember are watching.

So once the opening is over, we get this. 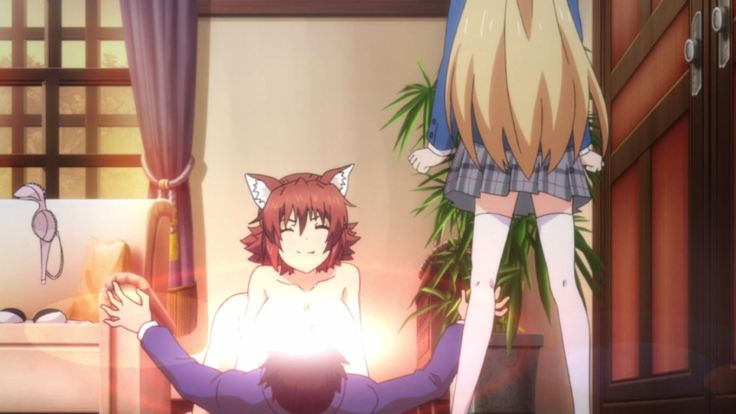 Ah she’s naked…this is getting too common.

So when Shin says that she put on some underwear she shows that she has been trying…with Sakuya’s underwear.

Now you all know that Tamako’s stacked and Sakuya’s not. That’s be the same thing as trying to stick a watermelon in one of those small produce bags they have at supermarkets. It’s just not possible. Although the attempt is funny.

So Sakuya tries to go for a classic tsundere slap but Shin’s got those instincts. He dodges like a hero but then he falls on top of her.

After that we see Shin cooking and then Sakuya comes in. Shin tries to apologize but Sakuya won’t take it. 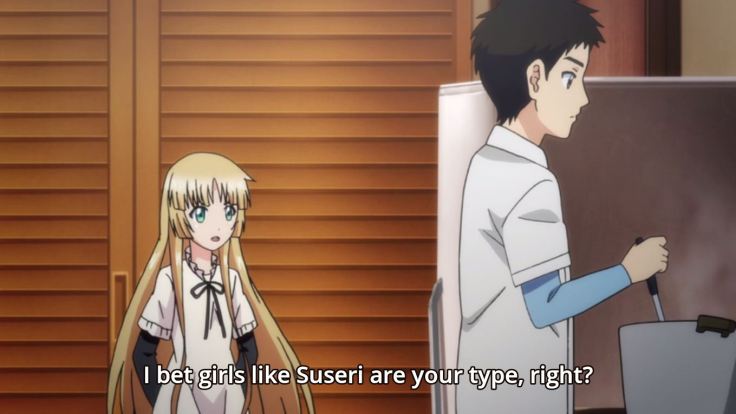 They’re mine. Granted I haven’t had a date in a while. Dry spells are painful.

So Shin has enough of it and closes her in to talk. 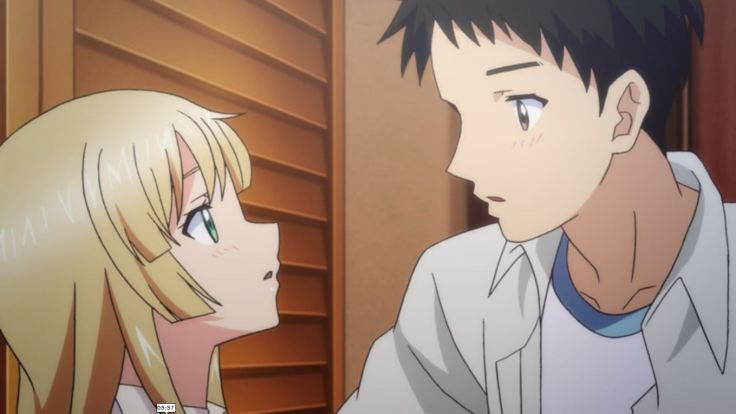 Looks like he was about to say that he loves her and kiss her but Nadeshiko comes up and ruins the moment. So close. 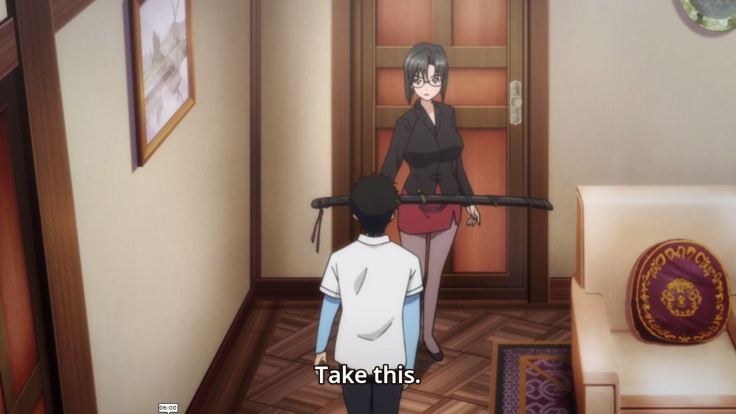 So turns out that Shin’s getting a weapon to fight the Yokai. Finally he ain’t going to get owned all the time.

So the next day Shin and his friend are checking out the girls’ kendo team. Shin must be there to check out sword techniques…the other guy must be there for bouncing boobs. I’m more on the other guy’s side in this one.

So after school, Sakuya waits for Shin but she gets Suseri instead.

They have the conversation that now that Shin has a weapon he’ll be in the line of fire more than ever. The fact that Suseri is bringing this up means that she might have real feelings for Shin.

So we go to the subway and we see this.

Seven episode and it takes me this long to do that joke? What is wrong with me?

So our group goes down to the subway but it’s dark so it’s hard to see. Wait Tamako’s a cat so she can see in the dark. 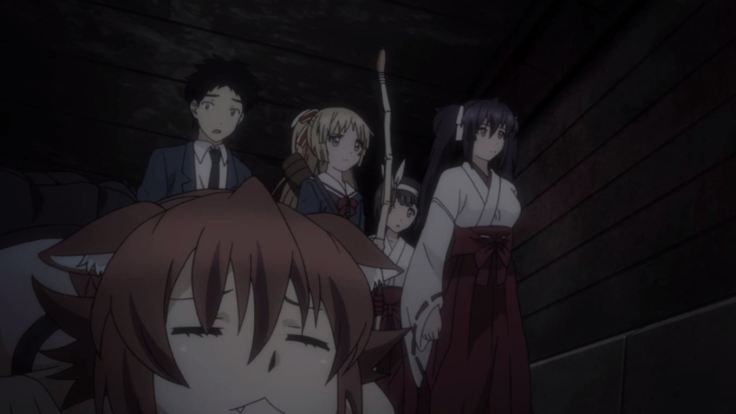 Fail at being a cat…

So they reach the stopped train find that everyone’s unconscious. What happened?

So it’s our friend here, the smoke spirit.

Oh this is going to be interesting.

Seriously you’re trying to cut the air. It’s like trying to attack a ghost with a stick or going against a tank with a Nerf gun. It just doesn’t work and you look dumb doing it.

So the only logical move is to run!

But this spirit’s smarter than the average one. It cuts them off at the pass. So the only way to get out is to the vents to get suck out the smoke. Shin goes for it and get some respect from me. Not Arata or Minato from Sekirei level respect but something I can say he’s a C-level Harem Protagonist.

He goes right at the Smoke Spirit and turns on the ventilation system to get rid of the Smoke Spirit. Unfortunately he stops breathing. Come on bro don’t die after finally getting some awesome points.

Sakuya and the handmaiden’s who’s name can’t be remembered start giving some CPR while Suseri goes outside.

So after Shin’s back on her feet they go outside we see this.

See reckless. Even though she did it for a good reason it’s still reckless.

As in Sakuya’s true name?

And that’s enough to pull Sakuya to the limit and use the Final Sealing Technique of the Shimazu. It takes off Isuca’s arm but it looks like Sakuya passed out too.

Looks like we’ve moved into the final parts of this anime. I can’t wait until we reach the ending. Now things are getting interesting.