So we start with Laxus and and the Raijin-Shuu are taking a job to the village of Borwatt. They’ve got a problem. What? What is that problem?

Ah I see why they wanted Laxus specifically. After all you send a Lightning Dragon Slayer to deal with lightning right.

Anyway Laxus uses Lightning Dragon’s Roar and disperses the thunderclouds. It works but it’s only going to be a temporary solution.

So with the lightning and the clouds gone for a moment, the townsfolk come out and thank them. All the girls get all hot and bothered by Laxus. That’s him. Making girls swoone in their sleep. 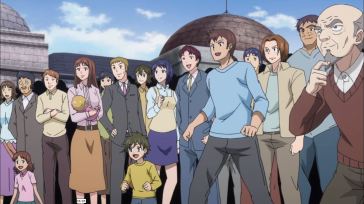 After that the mayor takes them up to the mayoral mansion and his entire self changes. He explains that it’s Laxus’s fault that the town is like this. Turns out that before the Grand Magic Games, Laxus passed through the town, got into a fight, and released a massive amount of electricity. 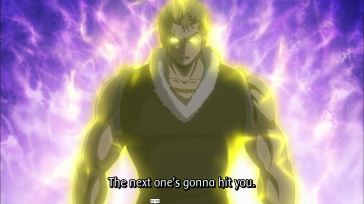 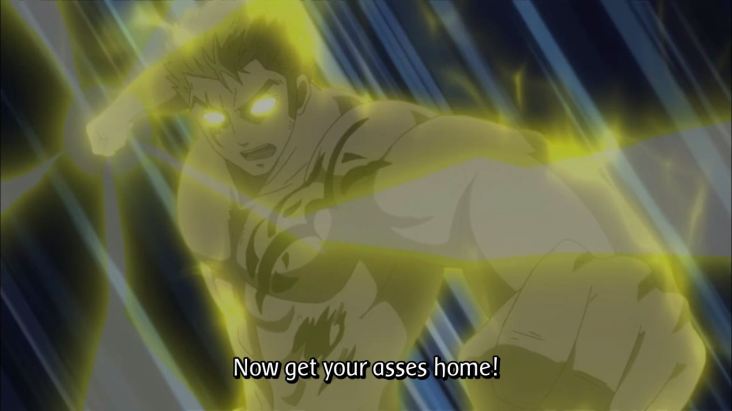 Poor fools didn’t even have a chance…

Anyway being the good guy that he is, Laxus goes to solve the problem that he created. However something seems up with that mayor and Evergreen thinks so too.

They go back into the village where the thunderclouds have come back and now there are some strange lightning creatures on the ground. They don’t stand much of a chance against Laxus or any of them really.

Laxus and Freed see that there’s a massive amount of electricity coming from undergroud. They check out the sewer system and find a ball of Laxus’s electricity under there. Laxus absorbs again and they find a lacrima that was storing it there.

Turns out that the mayor did all of this on purpose to try and extort money out of Fairy Tail. Nice try man. With all the damages they’ve got they can barely pay the rent some months.

Anyway Laxus goes over to the mayor’s mansion to kick his butt then his grandkid comes out and Laxus sees that he can protect something and leaves.

And the episode ends with the group heading home without any payment.

Just one more episode….please let this next one be quick!

Check out this end card

Kinda disappointed. I wanted it to be Evergreen but Yukino’s good too. She’s easily the sexy member of Sabertooth. It’s kinda hard not to be since she’s the only female member…you’ll see what I mean in the Sun Village arc.

So until the next episode which I will no doubt suffer through,
Later Days