Let’s Look:Trinity Seven OVA: A Harem Hero that Goes Down In History

This OVA. My man Arata is just too awesome and his legend grows everyday. I love this OVA.

So we start off the episode with Arata getting out of school with Lilith when the Headmaster’s secretary calls him in.

Turns out that Arata’s being expelled? Eh? But he’s been actually studying.

But there’s one way to save his grade. 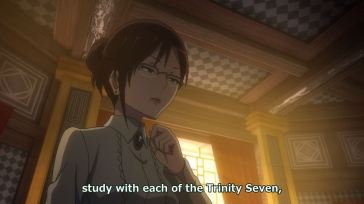 With the Trinity Seven? Imagine the possibilities! Arata already is! 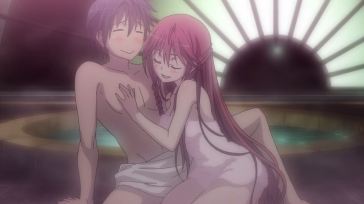 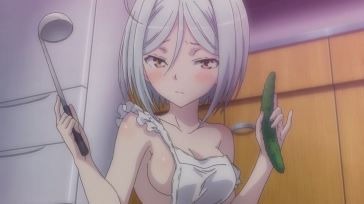 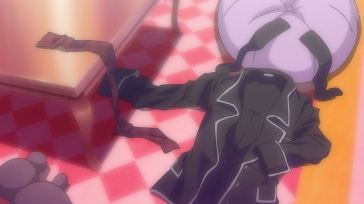 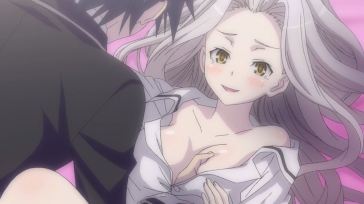 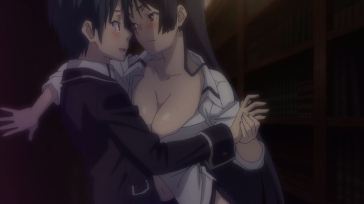 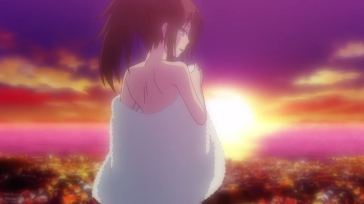 It’s only been 5 minutes and it is glorious!

Even his imagination is deserving of legend!

So basically study with each member of the Trinity Seven and do a report on each one. It must be done by 8am. 8 am? He does even look like he’d be up until at least 9.

Anyway run Arata! Your school life is on the line.

So out on the hallway Arata and Sora run into Levy. However she apparently says that he needs to talk to some other member of the Trinity Seven before he understands Envy. 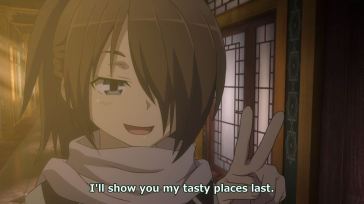 So after that they head over to the Infirmary to talk with Liese.

And she starts off with this.

And when Selina says not to do bad stuff with her body, Liese says that she can join in.

So Liese puts the camera and begins her explanation of the Acedia Archive.

That sounds like good times are about to roll.

So Liese connects to her Archive and after that she teleports on top of him and starts taking off her top!

Like I said best member of the Trinity Seven!

And right when it gets good Lilith shows up. 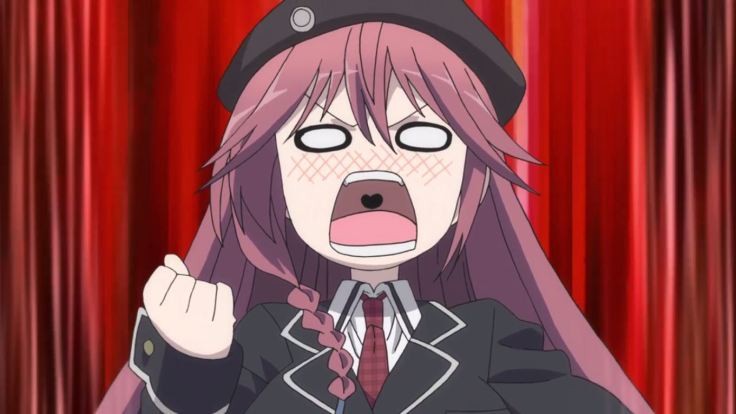 And then Sora offers for Lilith to join and Lilith of course says no.

After that Arata and Sora run for it while Lilith’s yelling.

Time to learn about some Avaritia! 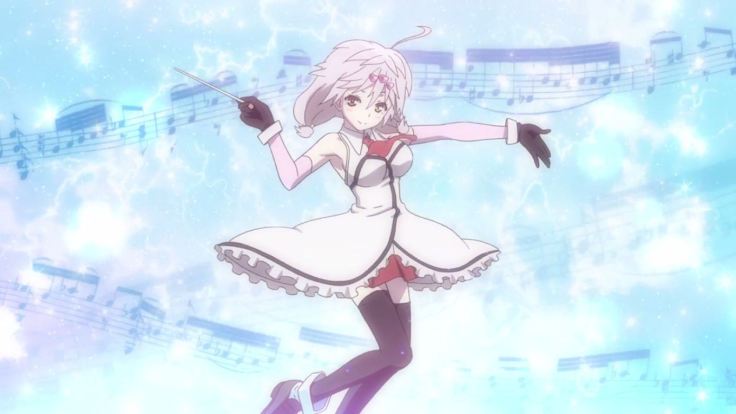 And then we end up in Yui’s dream world. So it’s time to begin learning. 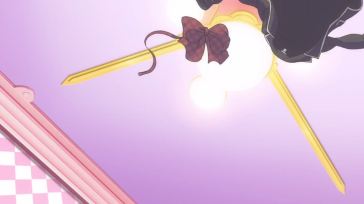 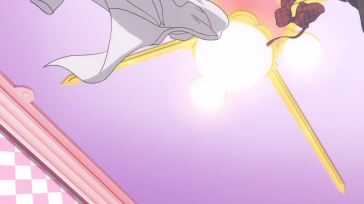 Wow she jumped to nudity fast and she wants to do it! That’s fast.

But Arata isn’t just cool but he’s honorable. He know that Yui’s been alone for so long so she’s eager to please. She wants to make other people happy and she’s willing to use her body to do it.

Arata’s a good enough person to be able to realize this and kindly says no. He also says that she has more friends that just him. 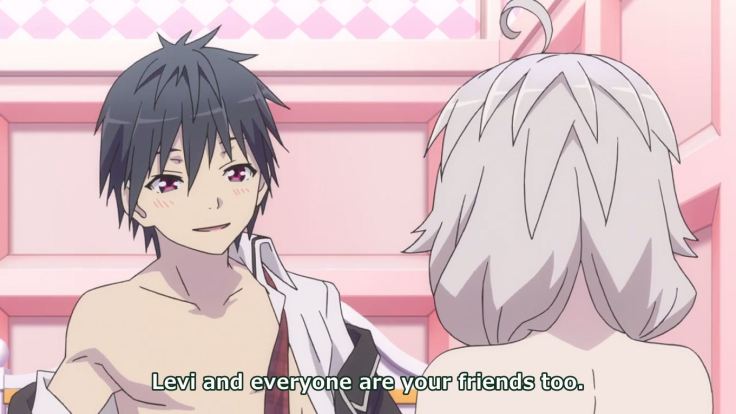 So Yui says that she isn’t really greedy because she’s always dreaming and can just bring up anything she wants in a dream. But lately she’s been a bit greedy.

Yui that isn’t greedy at all. It’s really sweet.

And with that Arata pats her on the head and says he wants that too.

After that we head over to the bath and we get Akio coming in! 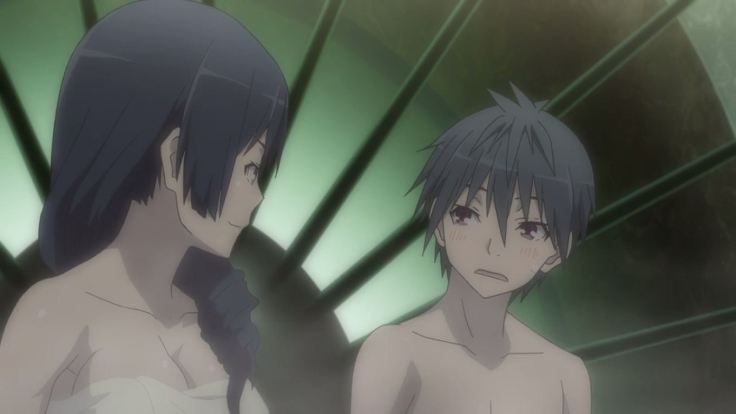 So after wondering about Mira for a second, Akio starts blushing when Arata looks at her.

So then Akio starts to explain her Archive.

Someone’s got control over their desires. Others…

And then Lilith falls over and gets covered in soap.

So after that Akio talks about Mira and says to make sure to be kind to her.

After we go over to Arin.

It’s going to be difficult since isn’t really that wrathful. 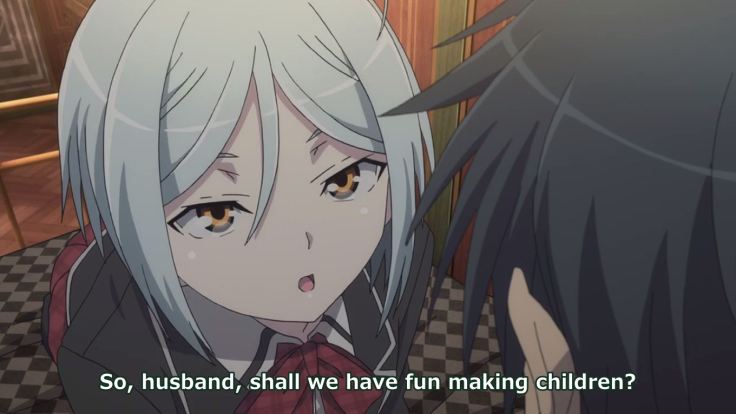 That’d be nice but what about the Archive? 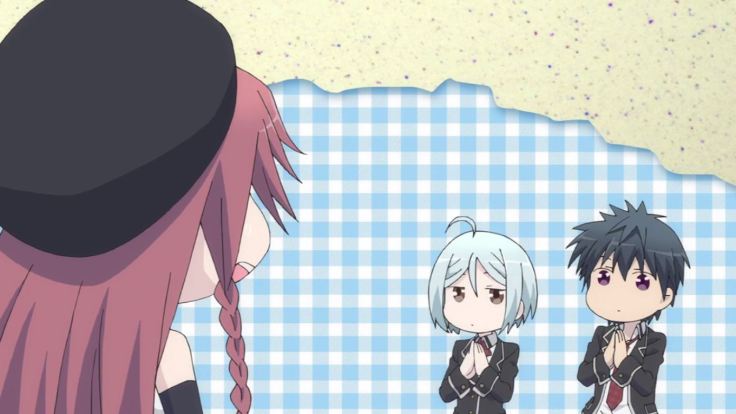 After that Lilith goes on a little tirade and Arata says this.

And Arin blushes. He’s getting a lot brownie points today. 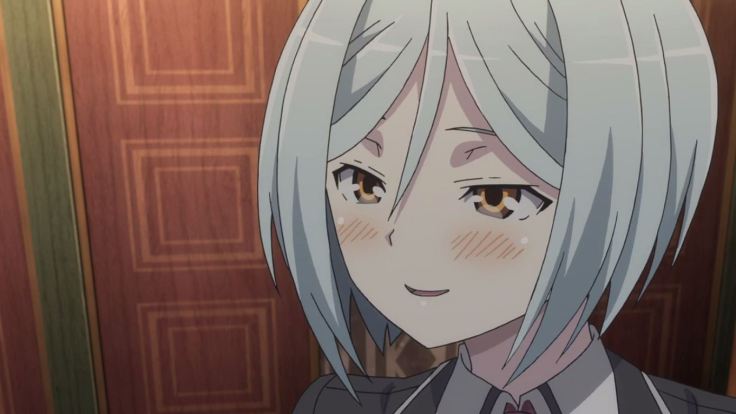 And Arata my man heads right over to Mira for some Superbia traning.

He always says thanks after a meal.

It was worth it! God that’s a lot of blood.

So after Arata heals, we get some Super Superbia lessons. 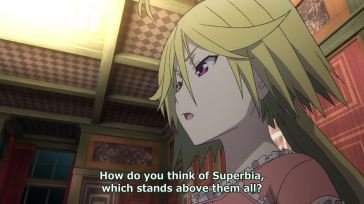 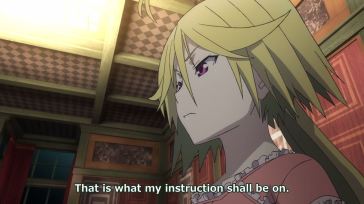 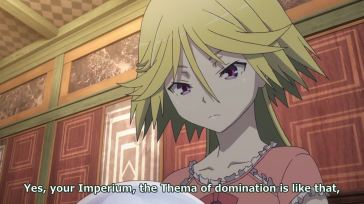 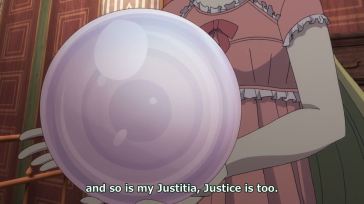 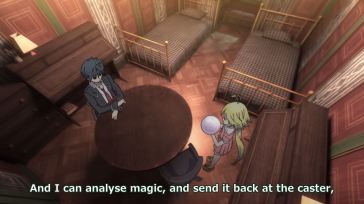 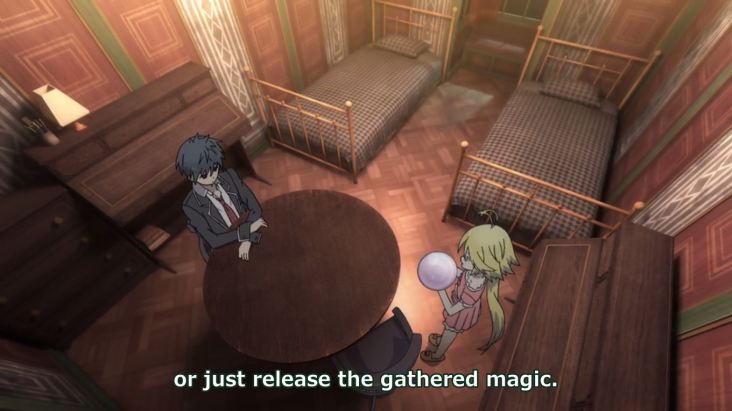 You got to admit that out of them all in this series Superbia and Luxeria are pretty broken. Then again I’m reading the manga and I know some Luxeria mages that are really strong. Why are all Luxeria mages evil though? Joe! Got any ideas?

So after that it’s time to hit the books! 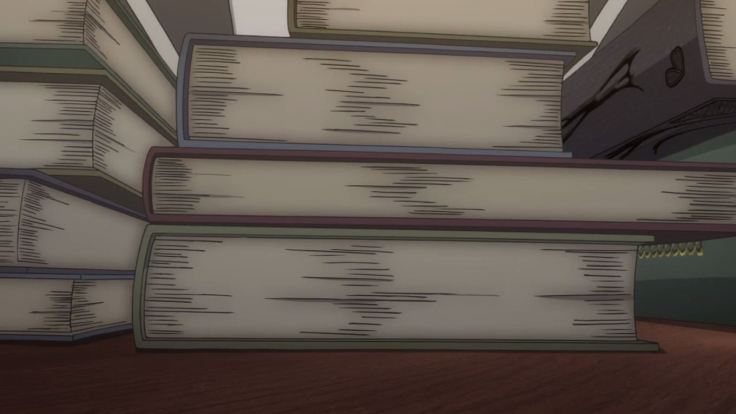 I don’t want to study!

I don’t why but that position looks really cute. Yoko Hikasa really brought Mira to life.

After a long study session Mira falls asleep and Arata tucks her in…all while Mira actually wakes up and Lilith is watching.

Lilith you dirty girl. You love to watch.

Of course from the way it looks it looks like he’s about to take advantage of her but he isn’t like that. 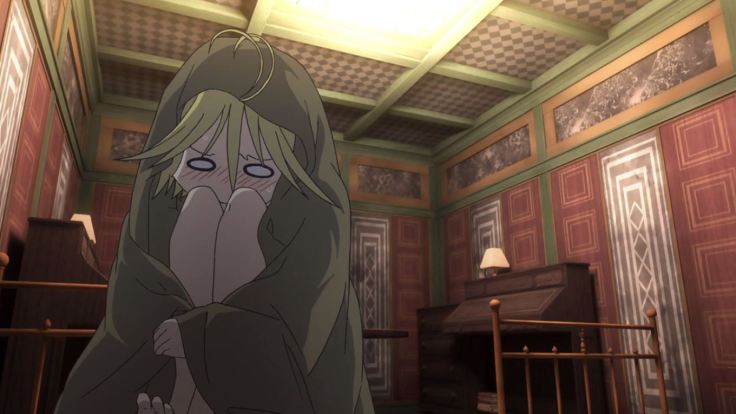 And Lilith’s hurting and jealous. She really likes him.

After that Lilith comes over to Arata’s room.

That’d be nice but my man’s got honor and legend!

I’m personally not sure of the number but some guys would have folded. I like Arata because he’s honest about how he feels but he isn’t going take advantage of anyone.

That’s worth respecting. Usually it’s a balance with harem characters. Either they’re losers that aren’t going to take advantage of a girl or they’re bastards that will do what Makoto in School Days did. Arata’s a good balance of straight forward and honorable.

And he comforts her after her jealous moment and tells her that he’s even more grateful to her and can always depend on him.

And with that the lights come on and Levy says that she’s shown him the Envy of a woman’s heart!

And then she explains that he would be doing perverted things with the girls and that Lilith would be following him so she’d get jealous and give her the perfect opportunity for Invidia to show out!

She also drugged Mira so she’d fall asleep…weird. What if Arata wasn’t a good guy?

And we end that with a beating before we head over to the headmaster and we’ve got someone. 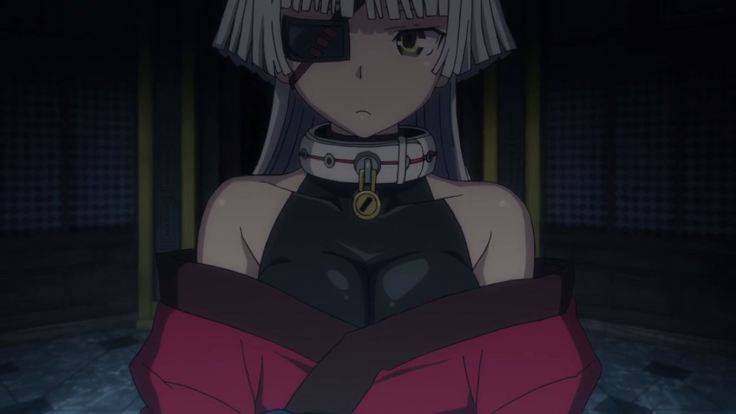 It’s Lugh! Looks like they captured her from Ish Karioth.

Then we get some scenes from the future. 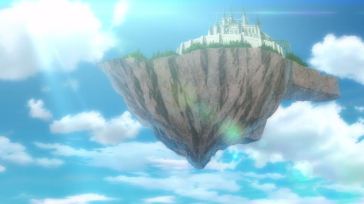 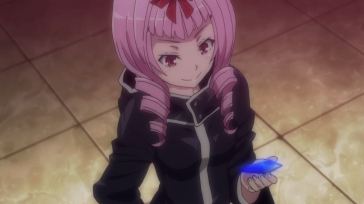 For those of you that don’t know this hints at the Sky Library Arc which came right after the anime and the Magic Tournament Arc which is after Sky Library.

You know what this means! Second season coming soon! Granted we have to wait for that eventually official announcement but hey they wouldn’t have done this if they didn’t think they were going to do it.

And we end the episode with Trinity x Seven x Heaven!

Ah now that was a good OVA. It got me hyped for the possible season 2.

So that’s it from me!

Until we get that second season,
Later Days 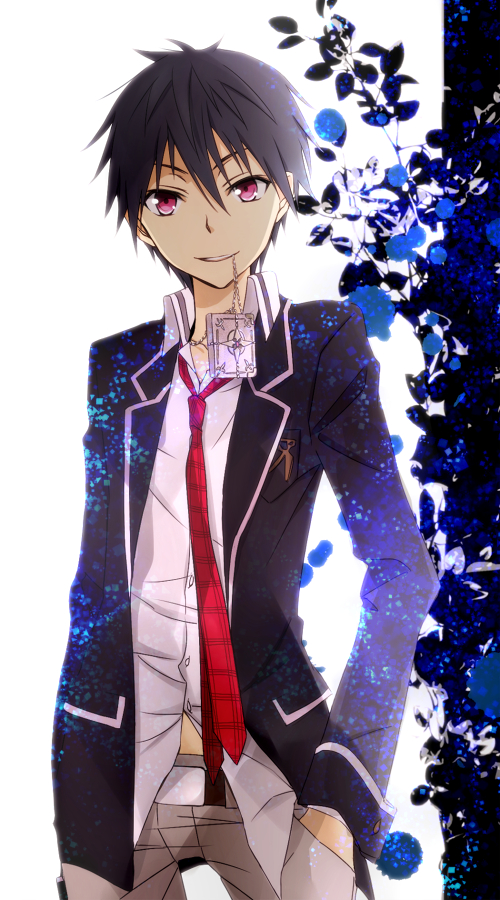 The legend of Harem animes, Arata! I get my pics from Zero-chan not Pixiv.