It seems that being a part of the Emiya family means that you’re either epic already or your awesome moment is coming up soon. Shiro gets his now. Then again that fight against Archer was one too

So we start off the episode with Gil snarking at Shiro about how he’s a fake and his ideals are not even his own.

And he even says this. 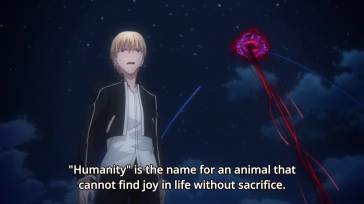 In a way he’s right but he’s seeing all the dark parts of humanity. There’s light in people’s hearts too.

Shiro tragically agrees with him but at the same time he still admires and strives for his ideal. Why? Just because these ideals aren’t his doesn’t mean that the things he’s felt are fake.

And while he’s pondering this over, he’s having a flashback of his times with Kiritsugu.

He comes to the truth that his ideals aren’t fake and he’ll keep chasing after a future where no one will get hurt and everyone will be happy.

And with that Shiro reaches a turning point in himself. He gets up and Gil says that he was relucant to use Ea but he should still be down for the count.

And when Shiro ask why he doesn’t use it Gil says this. 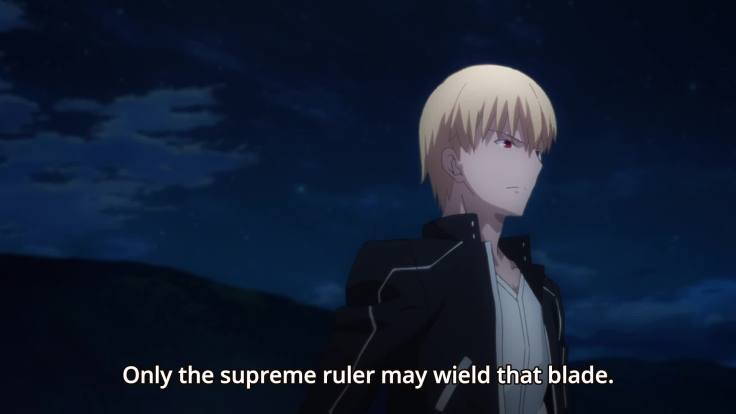 I call crap. I just read the end of Fate/Kaleid 2wei and you were spamming Ea like no tomorrow.

And Gilgamesh prepares a volley to finish Shiro off but Saber comes in at the last minute to save him. Thanks for making it Saber!!!

And apparently Shiro goes nuts because he tells Saber he doesn’t need her help and that she should go and help out Rin.

That’s what 4th Grail War Rider said…then he got Ea to the stomach.

He says that he and Gil are the exception to the ‘Servants wreck normal people’ rule.

Yeah he’ll need it. And with that she leaves to help Rin.

And then Gil starts laughing. As if this faker can beat him. 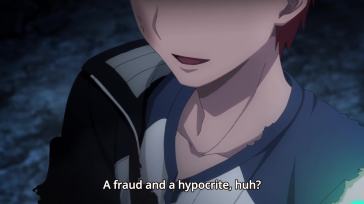 He rips off the shirt and starts up the chant!!!! 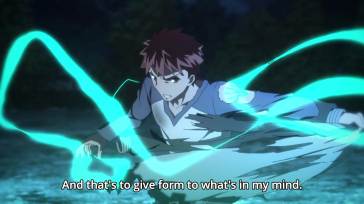 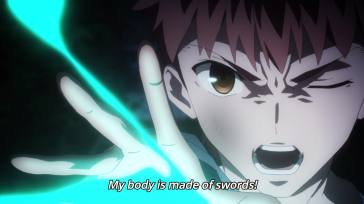 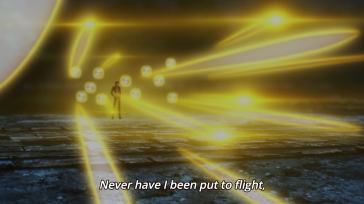 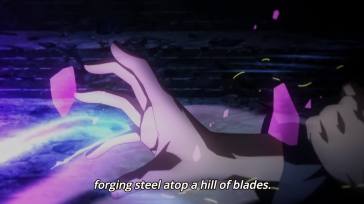 It’s okay to lose control of various bodily functions as you experience the sheer GAR of this moment. It’s natural. 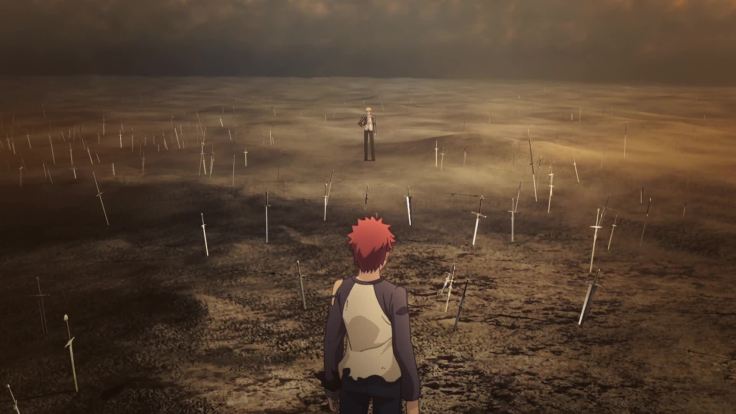 And here we are. Shiro’s version of Unlimited Blade Works. Look at it. No gears in the air and no smog from forging.

It’s a twilit landscape. It represents how Shiro’s path in this route as well as Unlimited Blade Works Route as a whole is the twilight between darkness and light. Neither fully dark or fully light.

It’s the contrast between the light and pure idealism of the Fate route and the darkness and absolute realism of the Heaven’s Feel route.

And at that moment Emiya Shiro fully understands his magecraft.

He wouldn’t have been able to actaulize the Reality Marable without coming to that conclusion as well as finding his view on his ideals.

And then Gil takes up some swords and casually says ‘Yeah so what’.

And Shiro just blasts them out of the air with his own swords.

Shiro explains that everything here is a fake but that doesn’t mean anything. There’s nothing that says that the fake can’t rival the real thing.

And we move over to Saber looking at the mud and calls out to Rin. She tries to go through the mud to save her but Rin tells her not to.

Saber tries to rescue her but Rin uses a Command Spell to stop her. The mud will curse Saber with All the World’s Evils and that generally isn’t a good thing.

Then the mass of mud expands trapping Rin and Shinji under it. Knowing that she’s not going to make it Rin orders Saber to destroy the Grail. 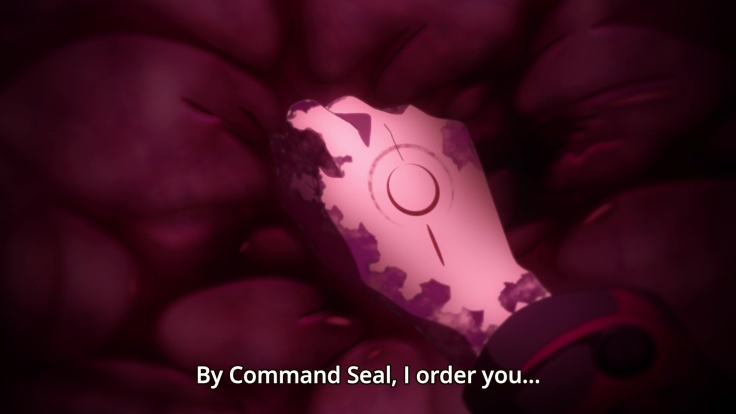 However Saber resists the order. Man that A Rank Magic Resistance is good.

And after that Rin prepares to use her final Command Spell to make sure that Saber destroys the Grail but then she hears this.

Like I said being Emiya is awesome. Can’t keep a good Servant down.

And that frees Rin and lets Saber blow up the Grail. 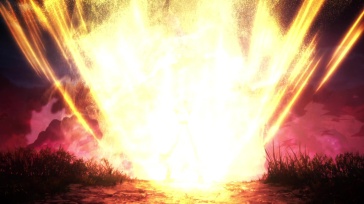 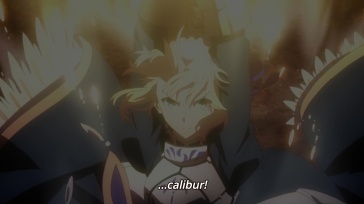 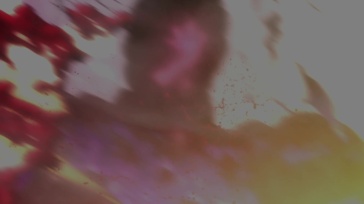 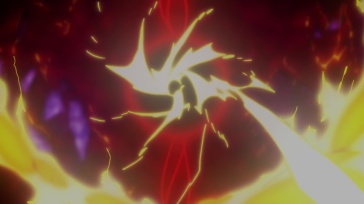 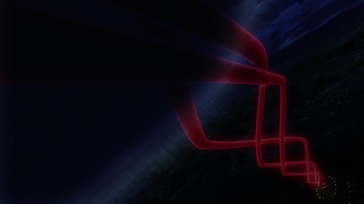 Awesome but now with her use of her Noble Phantasm, Saber has to disappear.

I guess there’s no Good Ending for Ufotable. It was said in the Visual Novel after she used Excalibur, Saber still a little bit of mana left and she could have stayed in the world if she really wanted to. However this isn’t her time and she accepts that her part in this is done. The rest is up to Shiro and Rin.

And with that we switch back to Shiro where he and Gilgamesh are going at it.

It’d be really tiresome to go over the fight step by step so I’ll give a general play of how things went.

First I want to say that Studio Deen’s version of this fight was completely wrong. Shiro was screaming at the top of his lungs while in the Visual Novel he was incredibly calm, mostly because he reached a full understanding of himself at this point. Secondly, despite having the whole vast reach of his Unlimited Blade Works right within his range, all he uses is litereally one sword during the entire fight and Gil just sits there and lets him do it.

Now in this version it plays out the most logical way, exploiting the Gate of Babylon’s weakness, its slower firing time than Unlimited Blade Works.

Shiro keeps Gil pinned down by throwing the same swords that Gil’s throwing at him back at him while he closes the distance between them. Then using the fact that his projection copies the battle skills of the person that used the sword, Shiro beats Gil using his superior swordsmanship.

So now that you know that let’s check out this battle in glorious 1080p pictures! 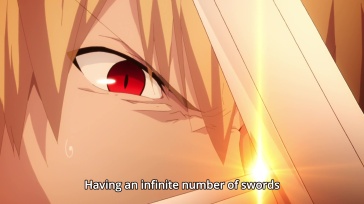 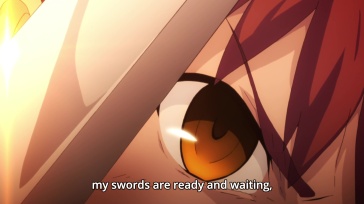 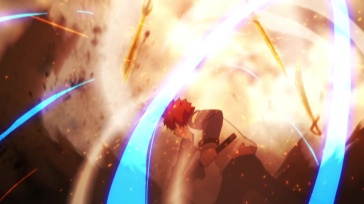 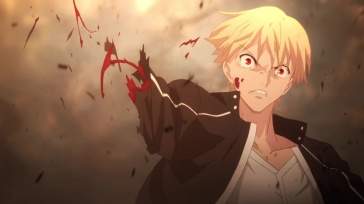 But Shiro’s Unlimited Blade Works ends when Shiro finally reaches the end of Rin’s mana supply. But look at the damage he caused.

I doubt that anyone’s cut him like that since Enkidu. It looks like Gil’s about to finish Shiro off when the Grail decides that it still wants Gil as its core. Silly Grail you can’t make a Servant your core.

So Gil gets pulled into this void but he manages to keep from being pulled in all the way by using his chain Enkidu and wrapping it around Shiro.

But then Shiro hears Archer’s voice telling him to dodge to the right. 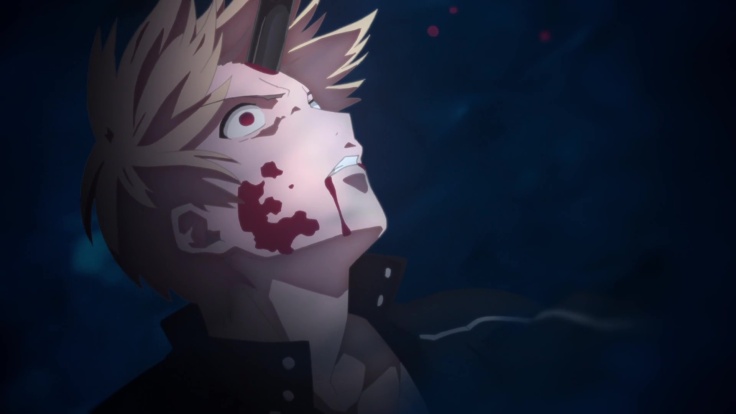 Boom Headshot. And with that Gilgamesh is defeated.

And then we move over to Archer and Rin where he teases her and she asks if he can make a pact with him once more in order to save him from his fate as a Counter Guardian. However he doesn’t feel that he deserves the right.

He tells her to watch out for Shiro and that he’s finally found his answer. And first time we see Archer smile.

And from Archer’s going to keep going by himself thanks to the things that he’s learned from Shiro and Rin.

Beautifully done episode. I’m truly happy to have seen and even better seen it in 1080p. It’s something to treasure.

Now it’s the next episode is the epilogue. 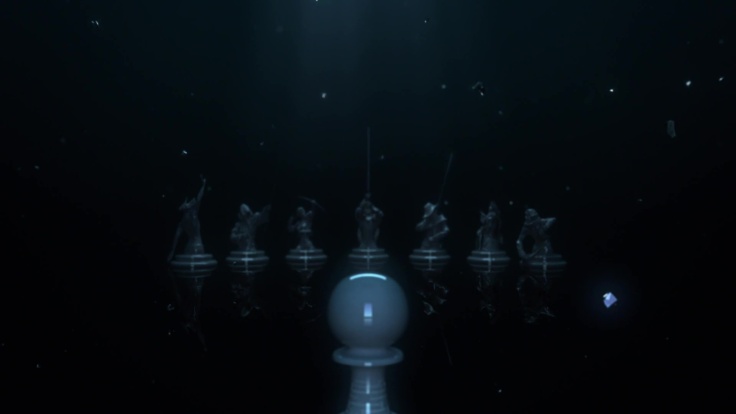 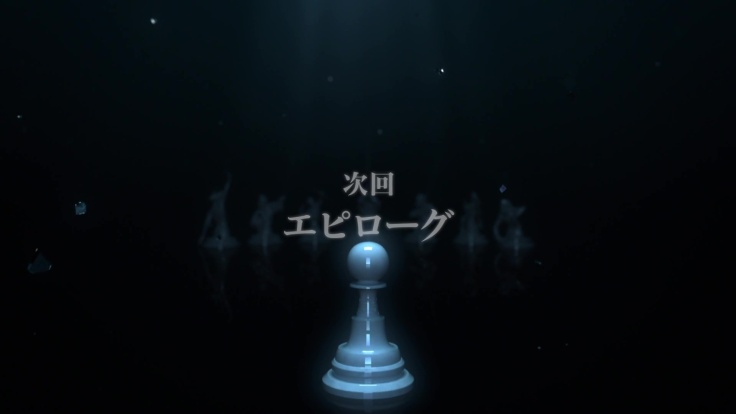 Now the Servants are moved into the dark and the pawns step forward to live out their lives. There’s some things that I’m curious if Ufotable will put in the Epilogue. Will there be any news on the Heaven’s Feel movie? Announcements for future Type-Moon projects? I don’t know right now but you bet I’ll check it out next week.

So until next week and the next episode,
Later Days

Archer saying goodbye in chibi! Too cute I get my pics from the Zero-chan board not Pixiv.