Hey everyone. It’s Deven Luca and I’m back with the second part of the Date A Live Volume 12 review. Sorry it took so long. I have to be one of the laziest anime bloggers out there.

I’ll try to do better in the future and get the third part out as fast as possible.

So we left the last part at the end of Shido’s date with the Yamai twins.

Immediately after that date is Natsumi’s date. Most of you don’t know her since the anime didn’t get to her arc, she hasn’t appeared in any of Compile Heart’s video games and she didn’t get much action in the Origami arc. All in all, she’s got low visibility. I like her though. Her arc is one of my favorites other than the Origami arc.

Anyway Natsumi’s feeling sad. She thinks she’ll be the one that drops the metaphorical ball and end up with Shido dying because of her.

As you can clearly see Natsumi’s got some self-esteem issues. So she tries to go after Shido in the pool but she fails when Shido surprises her from behind. So while she’s recovering the Fraxinus crews gives out the choices:

1. Approach him innocently using her unripe body and make his heart thump fast.
2. Act like a big sister full of allowance, aiming for a contradiction in looks and behavior.
3. Show him an appeal of sly loli BBA.

I’m just in shock after the first and third ones…

So Natsumi being herself doesn’t think she can pull off doing the lolicon bait thing so she plans to do the second one. However she doesn’t think she had the ability. Back in the 8th and 9th Volumes Natsumi appeared as a very sexy Onee-chan type.

Looks like she’s going for it again. She tells Shido to wait and she heads into the changing room and picks out one of the swimsuits meant for someone like Miku or Yuzuru or luckiest Spirits.

She uses a bit of her power to change into her sexy Onee-chan form and goes out to meet with Shido.

It’s really obvious that Natsumi has a lot more confidence while she’s like this because she’s scoring massive points, being all sexy and coy with Shido Unfortunately all good things come to an end and she runs of out Spirit Power leaving her looking like a child in a swimsuit built for a much older girl. You get where I’m going?

She basically flashed her loli chest at Shido…and tragically that’s enough to get the affection high enough. Shido you’re becoming more of a pervert.

So we move on to Yoshino now. She’s got plans like the Yamai twins and plans to rub Shido with some suntan lotion. However before things get to jailbait levels, the Bandersnatch show up with Ellen in the area too.

Reine tells Kotori not to worry about Ellen since she’s got a plan to deal with her.

What’s up with this? Why are they showing up here right now?

We don’t know the answer to these questions since Shido notices the Bandersnatch and immediately goes Kamehameha on them.

Shido-kun’s been watching too much anime lately.

So with Shido clearing the area and casually turning back to Yoshino and saying ‘Oh sorry about that. Let’s continue with our date.’

With that Yoshino uses her finishing move. She takes off the kid like one piece she was wearing to reveal a small tube-top bikini underneath.

What is wrong with this volume?! This is all lolicon bait!

And with that Yoshino explains that Yoshinon told her to wear it just in case her first swimsuit gets torn off.

And with that, back with the Fraxinus crew bells go off signaling that Yoshino’s got Shido’s affection to the max.

Shido-kun why are you a lolicon now…

So while Shido’s making his audition for a member of Dragonball Z, Ellen’s watching in confusion. After all none of the sealed Spirit should be able to release that much power. She’s about to go into check it out personally but then Mana shows up and the fight begins!

I have to admit I like Mana. She’s really good at fighting despite not being able to match a Spirit. I always like her themes. New Mana from Date A Impression CD is one of my favorite themes.

So Mana gets into Ellen’s way and says that she isn’t going to get pass her. Ellen snorts at Mana and she raises her sword to fight her.

So then we switch to Kotori and the other Spirits. Now there are only 4 more Spirits to get Shido’s afffection level up, Kotori, Miku, Origami, and Tohka.

However they can’t rely on the Fraxinus crew’s info or advice since they’ve got to deal with Ellen now. And add to the fact that the pool that was supposed to look a beautiful southern island now looks like a war zone. How are they supposed to get Shido’s affection up in this place?

Kotori’s got the answer! She lets out a quick whistle and then the place changes into a trendy little party hall. Nice and swanky.

Then we get Kotori, Miku, Origami, and Tohka changed into their party dresses.

Very nice for the Miku fans. Miku is also a fan of the party dresses since her Yuri senses have predictably gone off. Focus Miku we’re on a mission.

So who’s going first? Looks like Kotori. Good now we’re out of the straight up lolis.

So she heads up to Shido and they start to dance as the music starts to play. Kotori’s got the moves and learned to dance a some time ago while Shido’s floundering. She guides him and they have a good time as they dance. 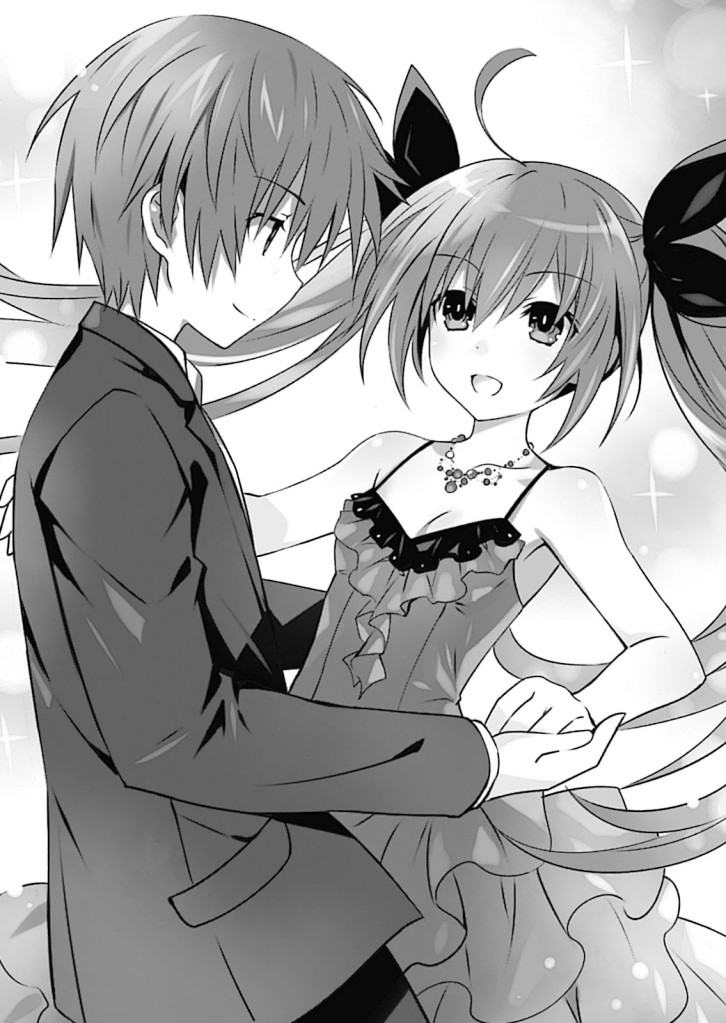 As they dance Kotori gets Shido’s affection to the max and as they part Shido promises to give Kotori a proper ‘adult kiss’ later. She blushes as they part and we move on to the next Spirit.

And that’s it for this part two. I’m going to finish it up with the third and final part soon. Also expect my anaysis of the entire novel in the third part.

So that’s it for the second part of Volume 12. Please return for the finale of this light novel volume.

So until the next part,
Later Days
You can ask me as many questions as you want on Ask.fm and you can follow me on Twitter to know when my new reviews are coming out. You’ll know when stuff comes out right when it does! 🙂

Why? Because they sell Nendroids and stuff for a good price! Check out these Nendroids of popular Date A Live characters. You know you want one if you can spare the cash!