You’ve just got to love Zeref. Every time he comes around things get good.

So we start the episode with Zeref welcoming him to his library, Tartarus. It’s mostly a joke since all of Zeref’s demons start off as a book and then someone does the ritual and summons them.

Zeref comments that END created the guild while Natsu swear that he’ll beat END and then he’ll be next. And then Natsu swing the Heat Sword he’s at his waist.

However Zeref isn’t about that life…and the sword decays to nothing. 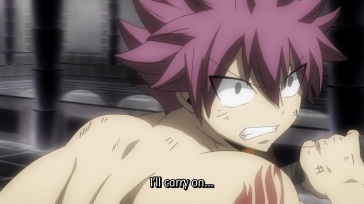 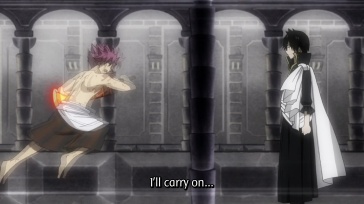 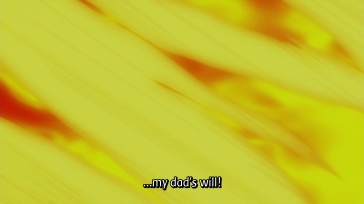 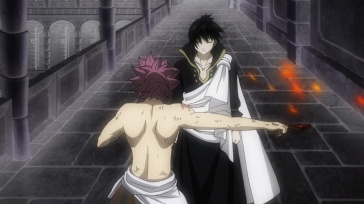 Like I said, Zeref isn’t about that whole ‘Getting Touched by the Peasants’ thing. You’d know what I’m talking about if you read the manga. All Hail Lord Zeref.

And after Natsu fails, Zeref just disappears again…being all mysterious and what not. Later Zeref see you some time soon.

You just got to love Akira Ishida. Really does Zeref well.

So we move down to the underside of the cube where Erza just stabbed Kyouka all the way through from the middle of the castle. 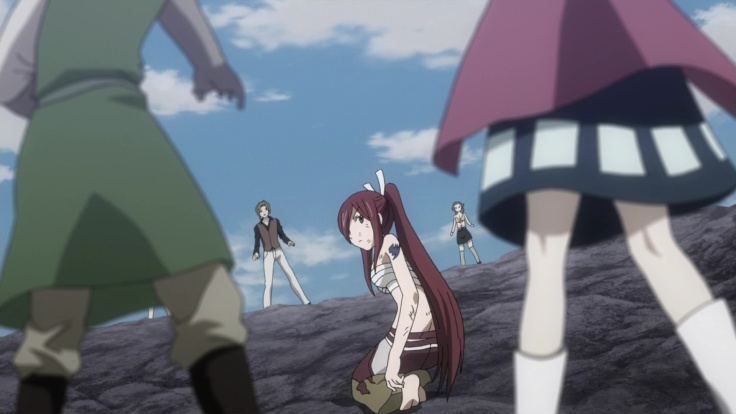 So thanks to Erza’s nice little lance, everyone can jump into the hole and get ready to face down against Tartarus. 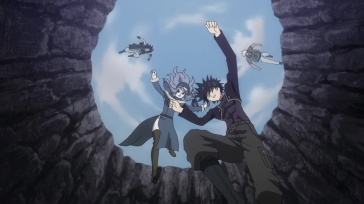 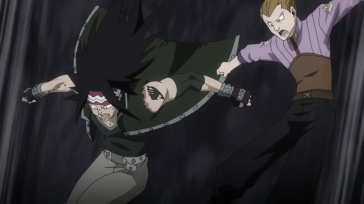 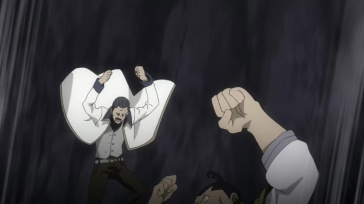 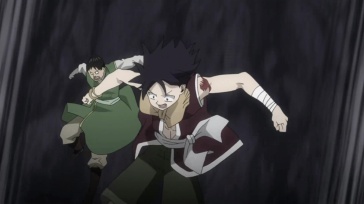 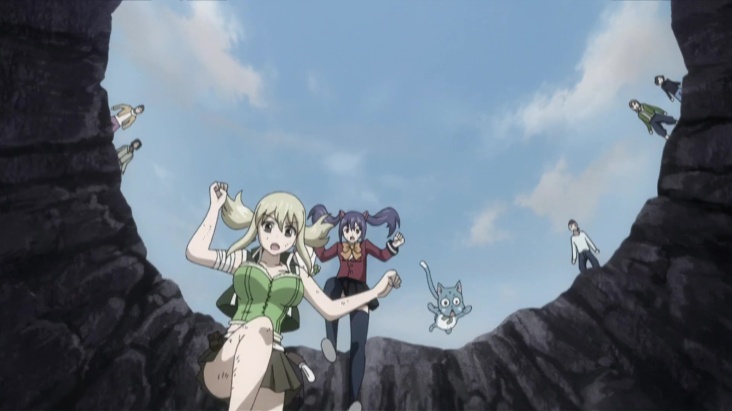 Erza’s about to dive in but Kyouka isn’t too weak to lose. Yeah it’s not like she was just pierced by a lance through probably a good few hundred feet of rock…or something. 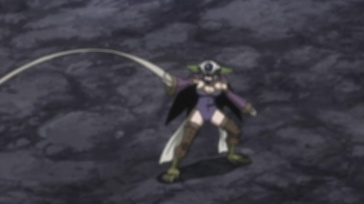 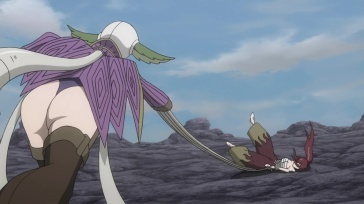 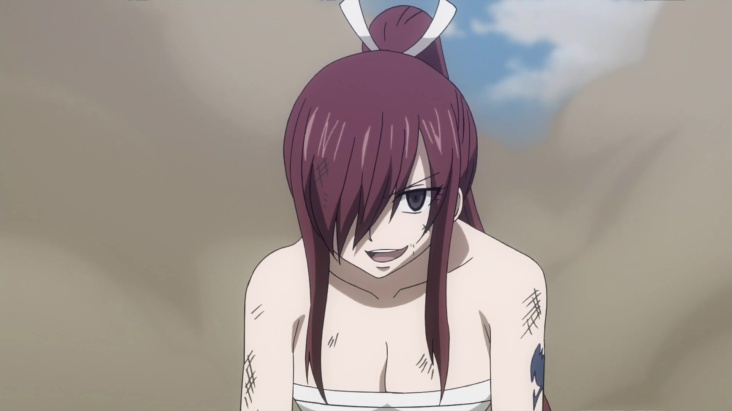 We see a little of the other Fairy Tail members fighting some of the Tartarus grunts before we head to Lisanna meeting up with Mirajane.

The two Strauss hug and then Miss Cute and Demonic Sayla comes up and she’s angry. 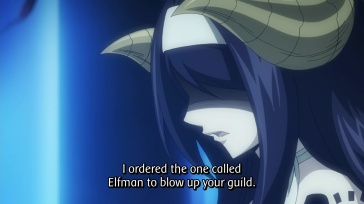 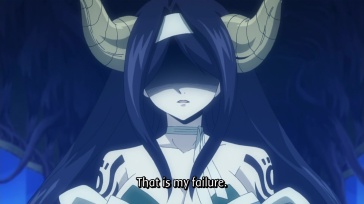 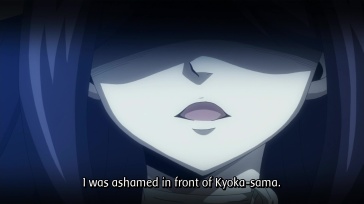 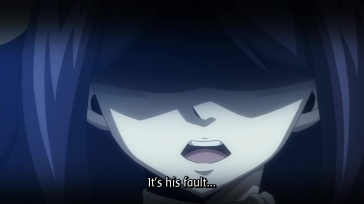 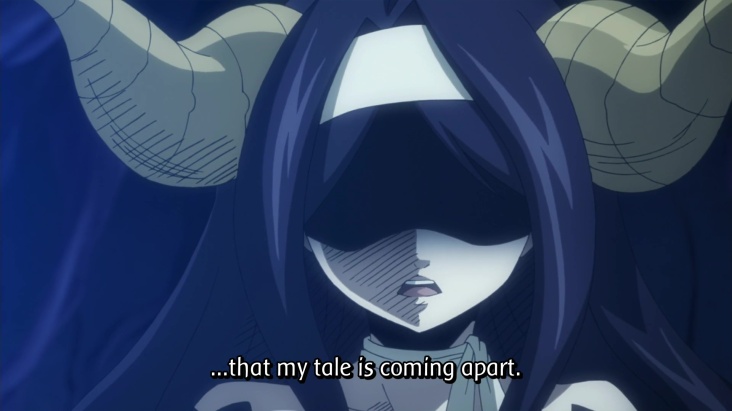 Now if you left in the scene where it looked like Kyouka and Sayla did some sexy yuri actions, it would seem a bit more real to me. I know they did something but the way that it appears now that Sayla just as a thing for Kyouka.

So now Sayla’s ticked off that Elfman made her look bad in front of Kyouka and now she’s going to take it out on Mirajane. 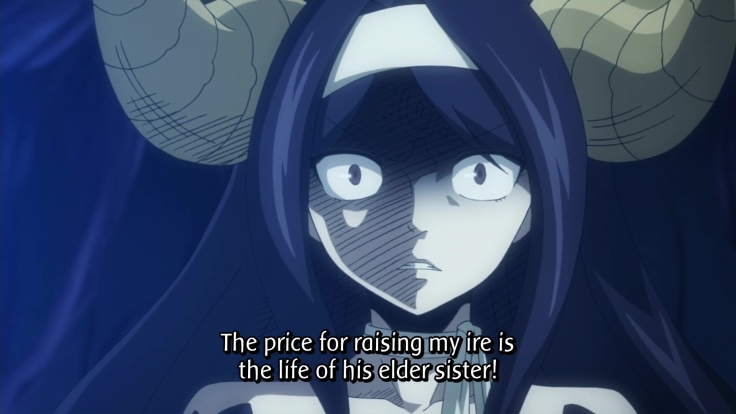 But Mirajane’s pissed off too. No one makes her little brother hurt her friends! 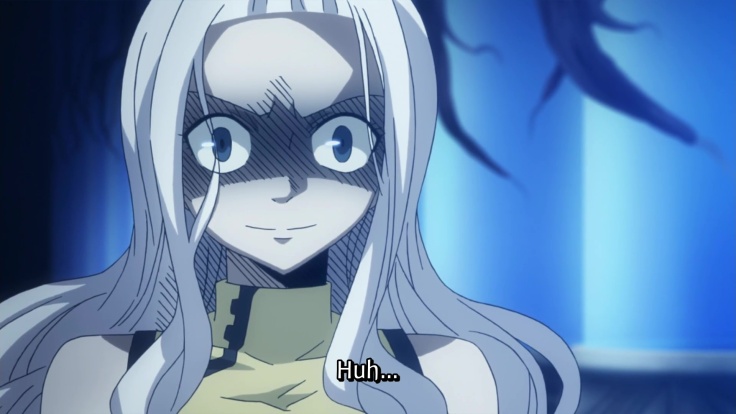 This is one of those time that you remember that Mirajane’s nickname is the Demon.

Then we move over to Franmalth who’s still checking things out with Face. Things are really weird with it since it appeared much farther away than they expected…there’s a reason for that… 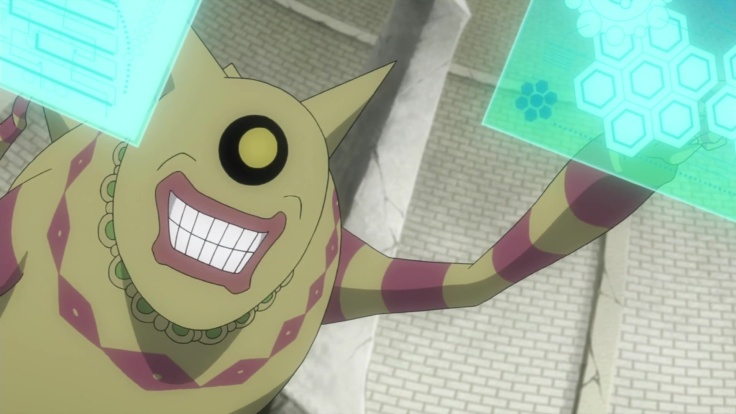 And then Lucy and Wendy walk in and see that Face is counting down! 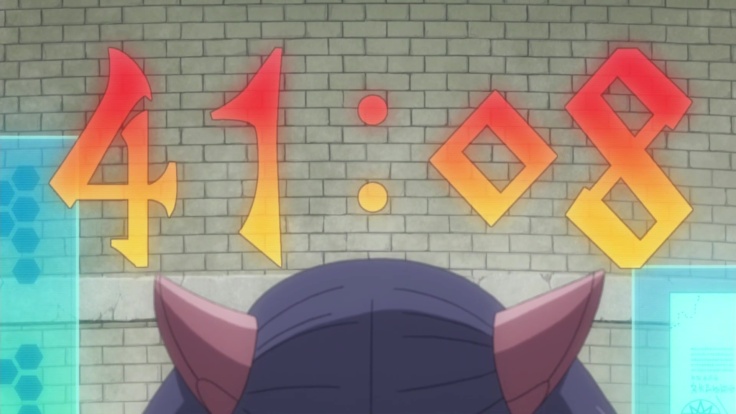 And Face will go off in less than 45 minutes!

So the girls try to leave out to stop it but Keyes gets in the way. 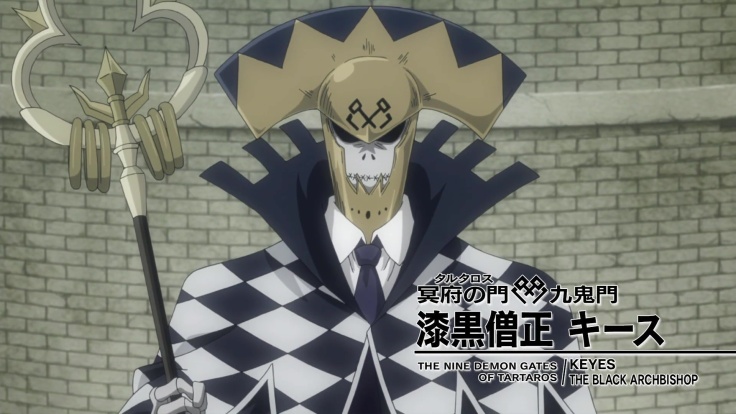 For those of you that watched Fate/Stay Night last season, Keyes is voiced by Joji Nakata who voiced Kotomine last season. So Kotomine went from being an evil priest to an evil demon priest…this is what we call a lateral move in the biz.

Anyway Lucy and Wendy get out of there with Happy and Carla but apparently Keyes is on some teleportation level stuff and cuts them off at the pass. However Gray just shoves his fist in Keyes’s face. They try for the window again but Franmalth shows up and makes a grab for them both.

However Lucy summons Aries and she puts the wool on him long enough for Wendy to get out. Then Natsu comes around and he’s looking for a rematch. 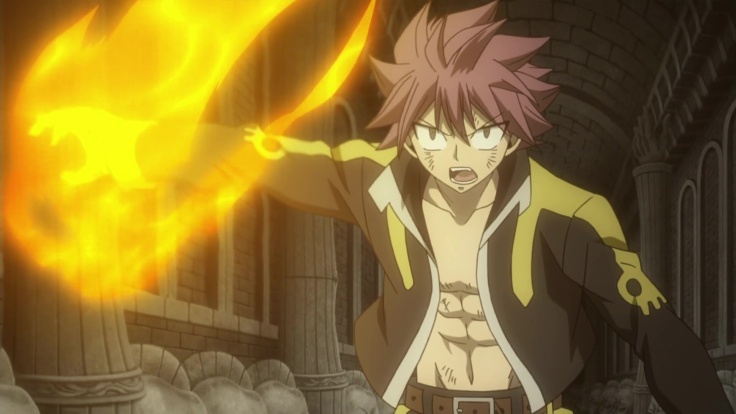 Nice clothes. Then we see that Franmalth has the ability to absorb souls which he does on Aries and Taurus. However that doesn’t slow down Natsu.

Then we see that Franmalth starts to change to his strongest soul. And it’s someone that Natsu, Happy, and Lucy recognize. 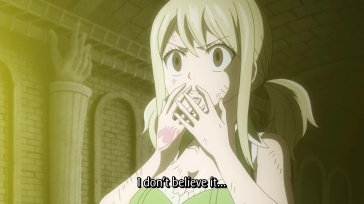 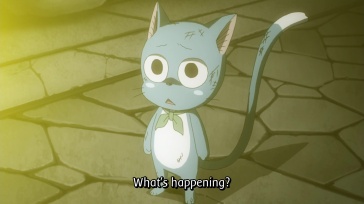 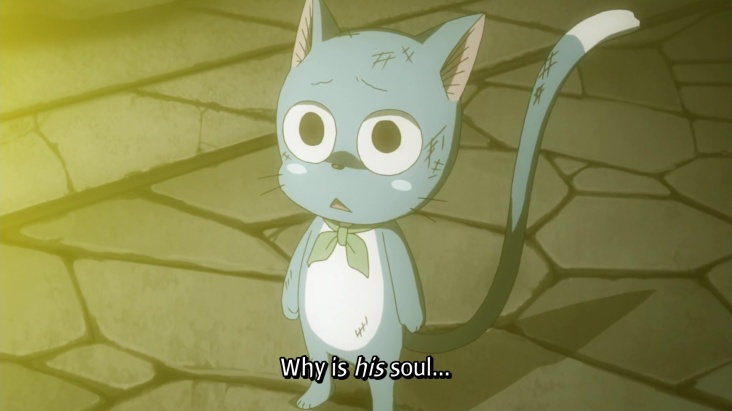 And as the episode ends we see Wendy and Carla flying to Face as the timer is still counting down with thirty minutes left until Face goes off. 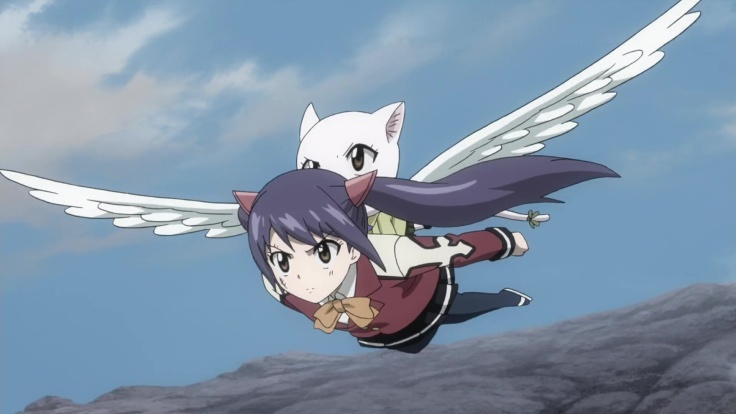 We’ve got some good stuff going down. I can’t wait for this! Wendy’s going to go all out on this fight! 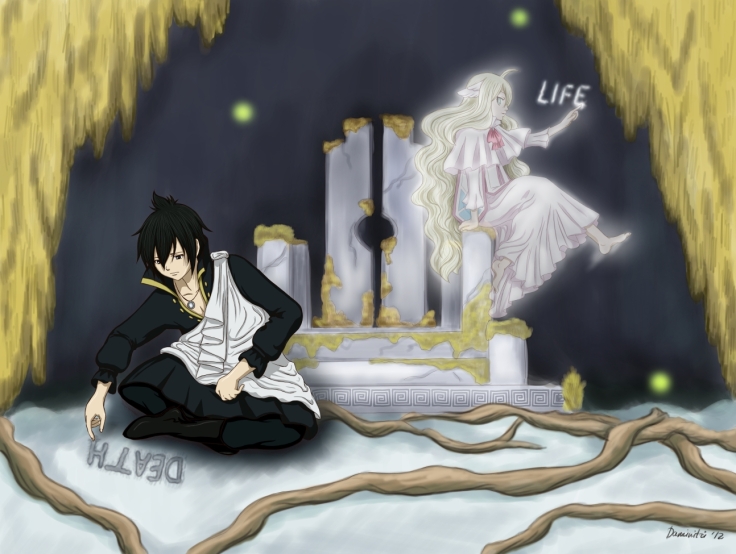 Zeref x Mavis. One of my favorite ships other than Gray x Juvia!  I get my Zero-chan not Pixiv.