Man this game is a sink and by sink I mean the best hours I’ve ever spent in a game!

So Fate/Grand Order has been out for a few days and I’m going to tell you some stuff about my first few days playing the game.

So after I downloaded the game…I waited. The game when I had gotten it was on maintenance and it sucks so I had to wait.

Once the game started up, I got some sucky Servant so I started rerolling.

Eventually I got bored and kept the Servant that I rolled after three rerolls.

She’s actually one of better Assassin that you can get that’s not a 4 star Servant. Granted Sasaki Kojiro, Carmilla, Stheno are better.

Anyway I went through Fuyuki which is the prologue board and I was doing pretty good with Jiang Ke and Shielder. Then Caster Cu Chulainn shows up as the Fuyuki support character. He is a godsend. His magic really made a lot of the bosses easy.

There are a few mini-bosses in Fuyuki. You fight against Rider Medusa, Lancer Benkei, True Assassin, and Heroic Spirit Emiya Alter.

I was going to reroll if I didn’t do well enough but once I started the fight with Rider Medusa, Jiang Ke started beating her down. Mostly because Riders are weak against Assassin.

So as I went through the board, I was having some fun. Not as much as I could but some. I’ll talk about that later.

So as the story progressed we reached the Cave of the Greater Grail and guess who was there. 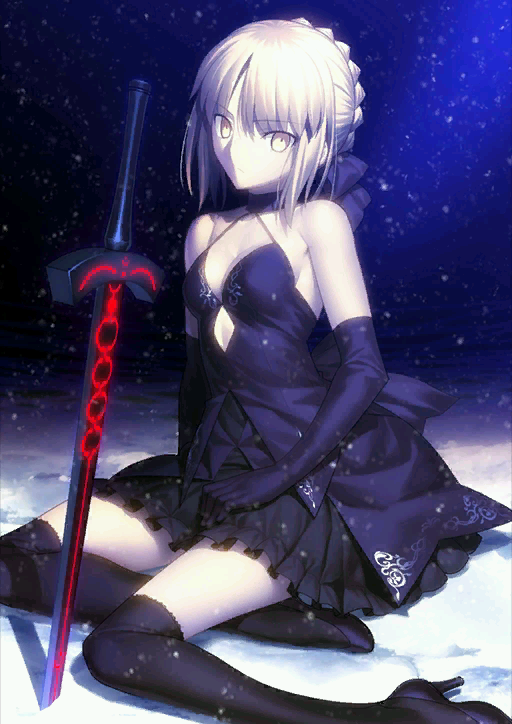 That’s right. Saber freaking Alter. I damn here crapped my pants. The second that I saw her I started forming strategies to face her. Mostly because I knew I didn’t have a particularly good team and without a Archer to exploit the Saber class’s weakness, I knew one thing.

I’d have to get hit with her Noble Phantasm, Excalibur Morgan.

So my strategy was to have Shielder in front to tank damage while Jiang and Caster Cu layed down damage. Also I made sure to try and get Shielder’s Noble Phantasm as fast as physically possible.

The reason is that Shielder’s Noble Phantasm buffs the party’s defense and halves all damage for a few turns.

Then again…when she smashed me with Excalibur Alter, she killed Shielder and Jiang Ke, leaving Caster Cu the only one alive.

And then he stepped up and managed to win the fight with his Noble Phantasm, Wicker Man.

And it was pretty good. I got some crystals and Caster Cu even joined my team!

So we move on to the next era which was Hundred Years War France and then Caster Cu kept getting wrecked. Why? All those dragons and they’re all Riders which Casters are weak against.

So Jiang Ke took the lead and while she couldn’t kill the first Chinese Emperor she was a dragon slayer.

Also there’s a new meme out there.

The reason being that despite the fact that he’s a one star Servant he’s able to kill all the dragons in France. Mostly because he’s a fast grower, he can crit often, and his Tsubame Gaeshi kills anything that touches it.

So back to me. I’m wrecking dragons with Jiang Ke when Jeanne comes along and joins the party. We head over to one of the maps and it’s basically a boss rush. First up is Berserker or better known as Vlad III. And he was a insane battle. Mostly because the Berserkers are glass cannons in this game. They hit everyone good but they’re weak to everyone too.

However Jeanne was just able to provide perfect support and she managed to keep me around until I could kill him with Jiang Ke’s Noble Phantasm.

Then I fought against Carmilla and she wrecked Jiang Ke. But I had Caster Cu in the back and he pulled off Wicker Man to get rid of her quick.

Now at that point, I was thinking of doing a reroll. I was content but I also knew that I had a high possibility of fighting Jeanne Alter and I didn’t want to get beat so I rerolled.

And I got a good team, two 4 star Servants. However now the server’s down so I’m still waiting.

All in all, it’s a good game. However I have a big compliant. The AP regen takes too long. It takes 10 minutes to regen 1 AP. Coming from someone that plays LLSIF where LP regens 1 for every 6 minutes, it’s simply too long.

Other than that, it’s a good game that I’d recommend. Granted I recommend waiting until the servers are back up.

So that’s all I’ve got for this first experience.