I struggled with this title for a bit until I got it. Also apparently Wendy’s an obssessed Boys’ Love fangirl. Poor Wendy. I never knew.

The joke’s same as the one in the Fairy Tail review. Satomi Sato is the seiyuu for Wendy Marvell and Mimi Katsura so it’s more reference to the two shows.

So let’s get started.

So the episode starts with Mimi having a dream of all the yuri stuff she’s see over the last season and the first two episodes.

And because of all these high octane yuri thought she can’t sleep. So what does she do? The only thing that someone with an overactive imagination can do.

So after the opening we have all the girls sitting down at Illya’s house doing their summer homework. Surprisingly they’re doing it early. That’s strange. It’s practically tradition in an anime that has a school setting in it for the characters to wait until the last minute to their summer homework. 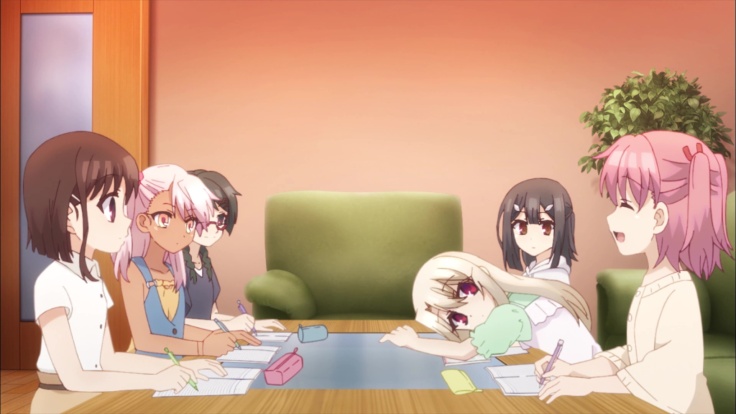 And then Suzuka gets all serious about how you need to take care of things in parts early so you don’t have to rush at the end.

And then Suzuka has a small flashback about her and her older sister doing some type of manga and Suzuka’s older sister says this. 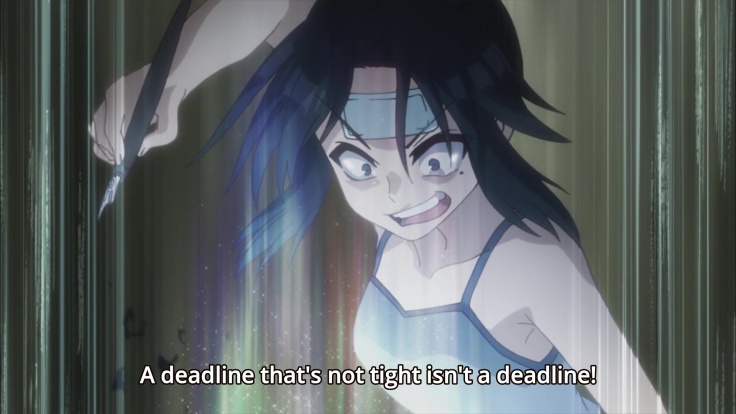 Reminds me of all the times that I’ve written a paper. I have a natural talent for writing papers so I can write them out at the literal last minute and still get a good grade. I have an A rank in getting A’s!

So the conversation moves away from homework to the Summer Festival that’s supposed to be coming up next weekend and all the girls decide to go together.

And while this is happening Mimi is apparently doing some brainstorming about her yuri love story.

It’s so hard to brainstorm no matter what you’re writing about. However she can’t seem to make the characters work as girls so the solution is…write them as boys! 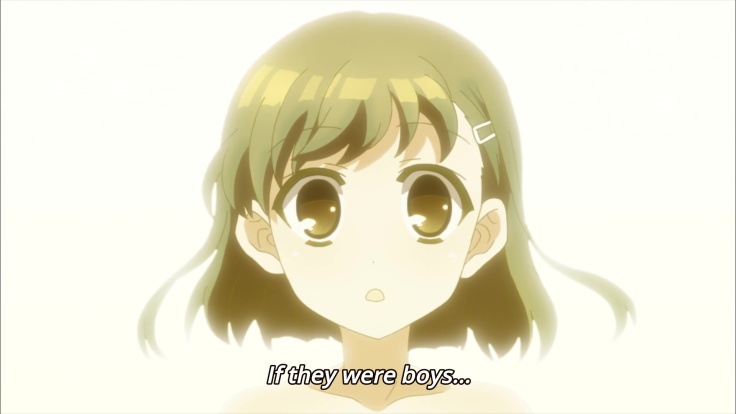 And with that another Yaoi writer has been born. And then imagines them as boys.

Wow give Kuro a bow and some grey eyes and she’ll look like a teenaged Archer.

So once Mimi comes out of her fantasy, she gets down to writing.

That’s when people are on their roll.

So we leave Illya’s place and head home with Suzuka and looks like her sister’s pretty mad. Or crazy. One of those…

And Suzuka’s predictably shocked. Her sister told her that all she had was the touch ups to do that morning but hey if the editor says she doesn’t like it you’ve got to get something new.

Ah that explains it.

And it turns to a Fate style argument that ends with Suzuka drawing but before they can start they need an idea…hmmm Suzuka’s got an idea.

And she calls Mimi to come over and one thing leads to another and Mimi’s tied up while Suzuka and her sister are reading over her most intimate Yaoi thoughts. Well that’s unexpected. 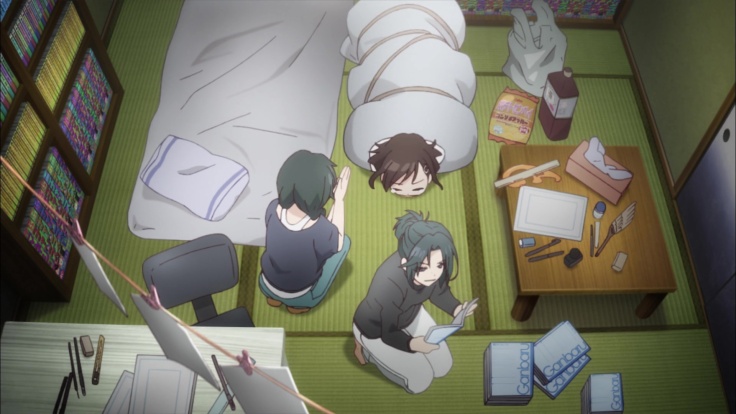 And while she’s tied up Suzuka begs for her to let them publish it as a manga. Then Suzuka’s sister and Suzuka tells her how hard it is to have such an imagination but not to be afraid of her beloved Yaoi feelings.

And then the manga’s published and in a twist Mimi has to go with them to sell it!

Don’t worry. No one’s going to recognize you and besides you’ll kill the embarassment soon anyway.

Yeah…I’ve clearly walked into the wrong neighborhood. Will it get better or worse? I’m going to figure out soon either way.

So after the little convention Suzuka goes over Illya’s house where she explains that Mimi’s gotten out of hand with her yuri/yaoi loves. 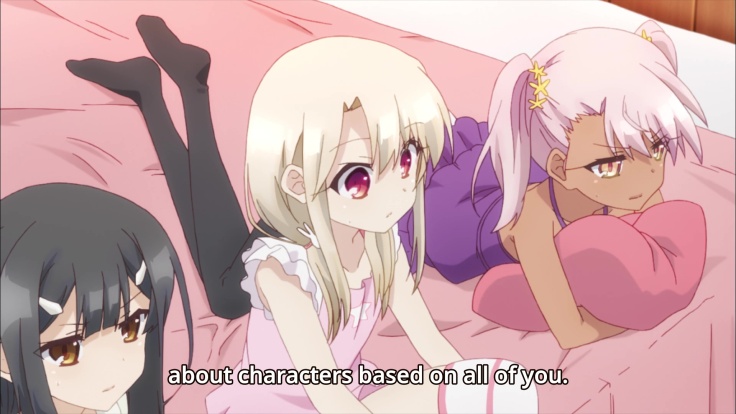 And that’s how it started but this is how it ends.

I wonder that myself…

So since Illya, Kuro, and Miyu have no idea what Suzuka’s talking about, Suzuka takes them to her house where Mimi’s coming over. However Mimi comes too early so she stuffs them in the closet and throws a book in there to explain what BL is.

And as Mimi gives Suzuka back the book she was lent and she’s absolutely happy with it and can’t even stop talking about it.

And then in the closet, Illya and girls start reading the book and see it all for what it is.

And then Kuro comes out right and say it’s a homo manga. Oddly right after that, Miyu just casually picks it up and starts reading it all while Illya’s spinning in confusion.

And then Kuro goes into a deep explanation of Boys’s Love and what really gives me a laugh is the image they use to explain it. 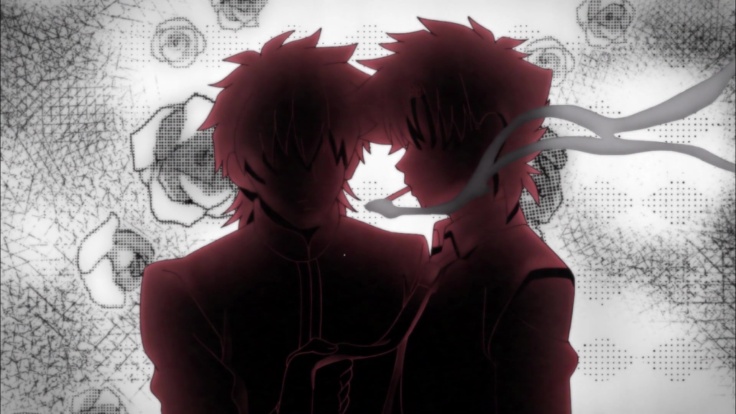 Good question? Maybe she looks up Fate/Stay Night BL on the internet?

You’ve got to love Chiwa Saito. She’s definitely one of the best seiyuu in Fate. She’s been a lot for them too. Fate/Kaleid as Kuro, Fate/Extra as Tamamo no Mae, and Fate/Prototype as Misaya Reirokan. I wonder if she’s a fan or read the stuff she’s been in?

And then we go to Mimi’s yaoi ridden explanation of the book she just gave back to Suzuka. Thank goodness they blep her out in some places or I would have started to blush.

I have to wonder how they recorded this. She’s speaking normally with no stops yet there’s no clear show that they just made that steam sound effect higher than her voice. I’m guessing she said those blepped out lines but I’m not sure. Let’s hope she did!

And while in the closet, Miyu’s still reading and Illya’s trying to get out the closet to talk to Mimi but Kuro won’t let her. They tussle around a bit until the door falls off and reveals them. 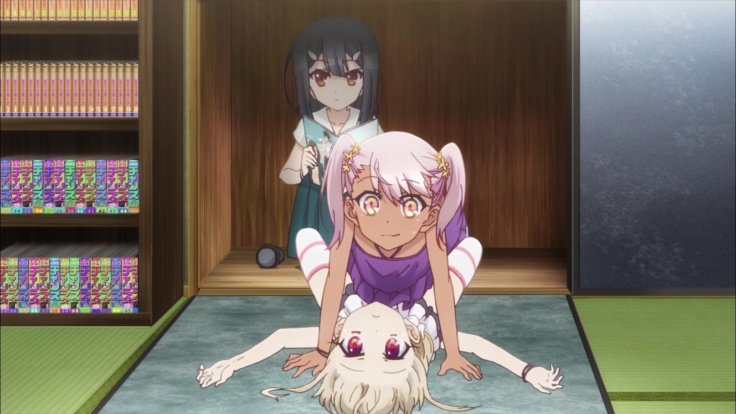 This is a joke and misunderstanding goldmine and there is no subtely to it. They fell out of the closet on top of each other in a yuri position. If that isn’t sending a message I don’t know what is.

So the first thing that Mimi thinks once they fall out is this?

A fujoshi with an imagination is a dangerous thing…

So after that Mimi explains how she was tempted, then fell, and then started sledding down the slippery slope of BL world.

All of those who think she’s beyond the point of no return, raise you hands!

I think that’s pretty much everyone in all of Fate and I think I saw some hands from Tsukihime and Kara no Kyoukai.

And then she starts explaining on her imagination and how she thinks now…pervert but are we who are yuri lovers any different…Nah not really. 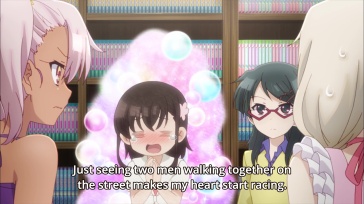 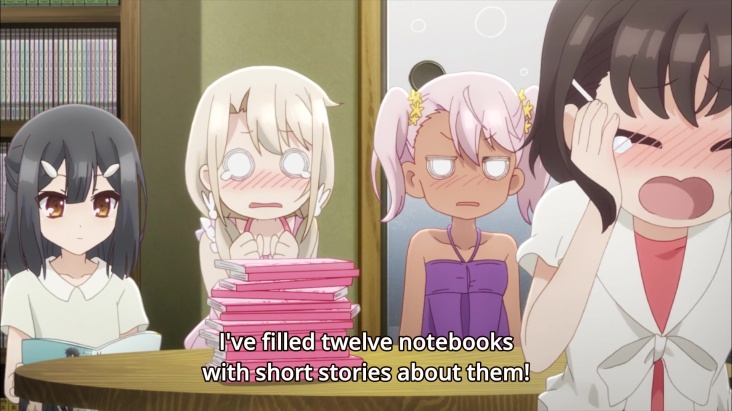 So while Kuro’s asking who’s the seme and who’s the uke in Mimi’s story, Suzuka’s sister comes in after being, so called, interrupted from her listening to a BL radio drama. 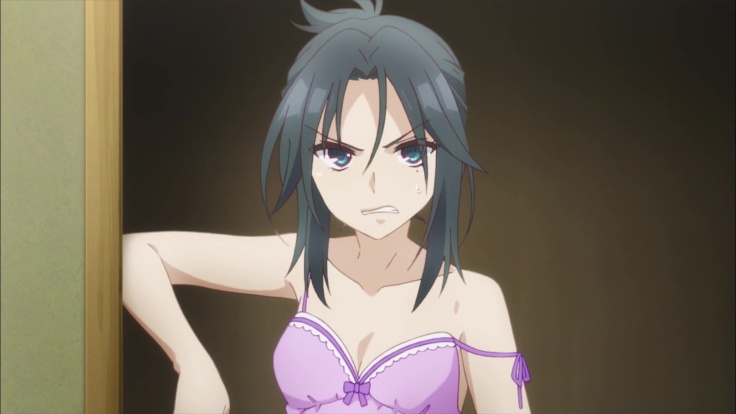 So Big sis takes it to a good level and asks if Illya can still accept Mimi as her friend despite the fact that she’s into something she doesn’t understand. If she can’t the best thing to do is to not be friends.

However Illya still wants to be friends with Mimi so what do they do now?

That’s what all great friendships pride themselves on!

And with that the girls laugh and the girls resolve to stay friends regardless of each other’s differences.

However something is still up… 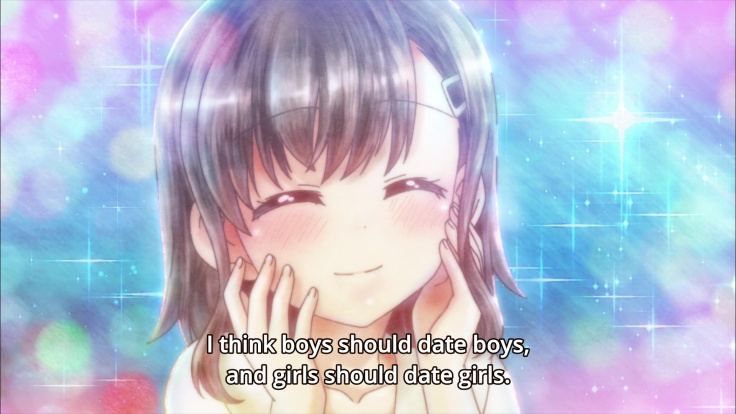 And as the episode ends we get Miyu finally finishing up the book and saying she understands it all now…there’s another future fujoshi there.

So that’s it for this episode. It’s in a way good to see this episode here in Zwei Herz. This chapter was originally in Drei but it kinda clashes with the actiony vibe of Drei so they must have put it here to pad out Zwei Herz and give more action to Drei when they do the anime of that.

Sounds good in my opinion.

So that’s all for this review. Looks like in the next episode the girls will be heading to the amusement park. And I hear some Iri so we might get some more of Illya’s family before the final battle.

The ultimate Magical Girl crossover! I get my pics from Zero-chan not Pixiv.