It’s good to see the girls have a lot of fun. Reminds me how much their lives suck in their normal series.

So we start the episode off with Illya and Miyu doing some random destruction in the construction site that Luvia and Rin made to dig down to the eighth card. 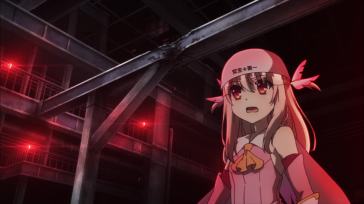 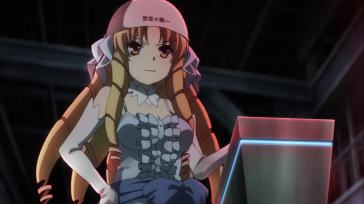 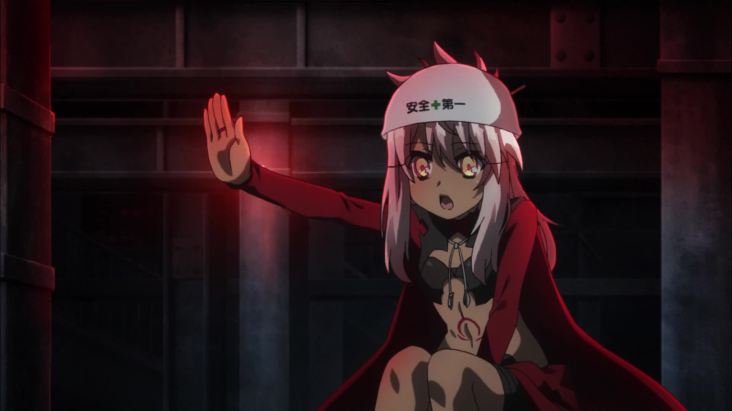 Good as long as they’re being safe.

So then Kuro and Illya have a question. So even if they dig all the way down to the card, they’re still going to jump into the middle of the dirt. Right?

So…what? So when they jump they go to the place that is the most safe for them to be? Right?

Forget that!!! I read about that damn cat! I am not about trying to understand that! I’m going with what Illya says.

Damn straight! If it works we keep moving and keep our sanity!

So after a dramatic look down the corridor, we move to something funny. Luvia starts putting gems down a chute and Rin sees her and reacts the way that Rin would react to someone wasting money. 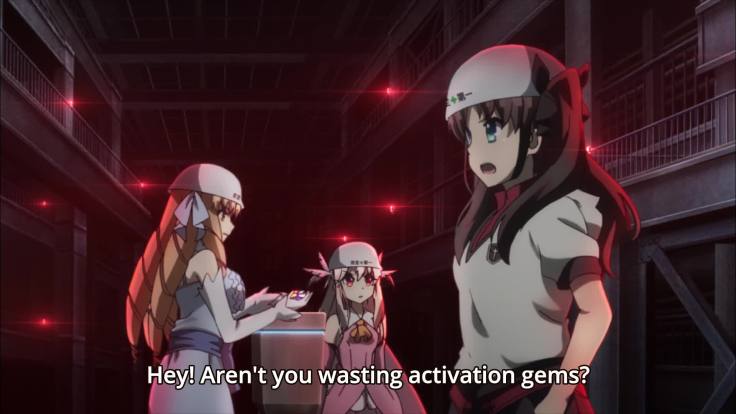 And then Luvia calls Rin poor and goes on and on about how rich she is. Ironically Rin is rich too but hey gem magic is expensive. Looks like Rin’s the poor rich compared to Luvia’s stupidly rich.

So after a quick fight between them, Rin explains that they’ve almost gotten to the spot where they can jump. However Illya feels a bit bad that they haven’t helped and just been having fun all summer.

And Rin’s answer is just one of the nicest things she can say at the time. Especially if you’ve seen any of the three route of Fate/Stay Night where Illya’s life equals suffering. 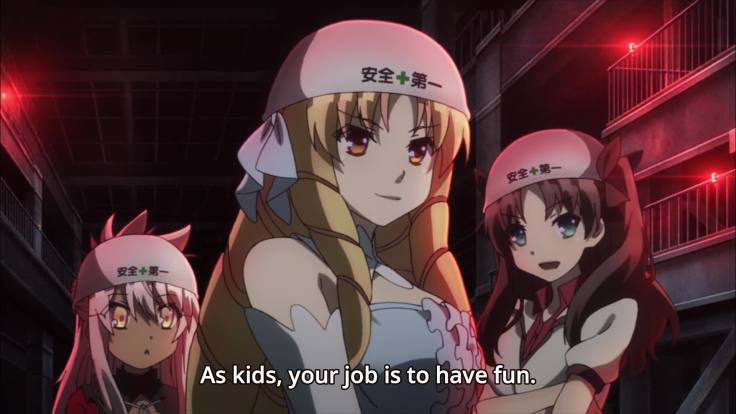 That’s sweet of her.

Luvia isn’t being cruel either. In gratitude for helping them out tonight, she gives them tickets to the amusement park.

So after the opening we have all the girls at the park plus the one adult they need so it looks responsible.

We need an adult not a hot mom that plays around like one of the kids. Couldn’t Shiro, Sella, or Leys come? 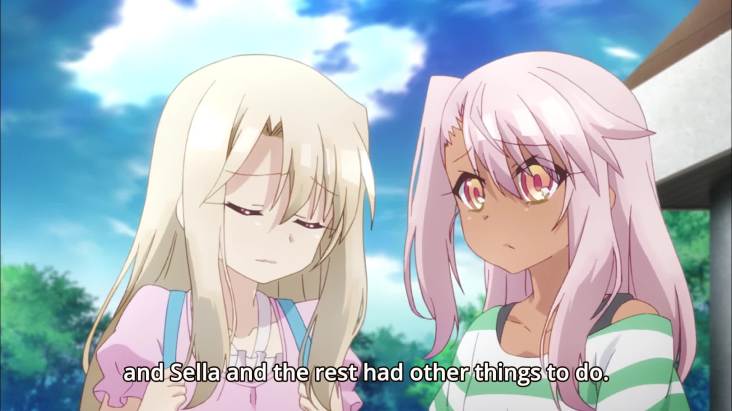 So while all the rest of the girls compliment Iri, Tatsuko has to be the one that takes it too far. 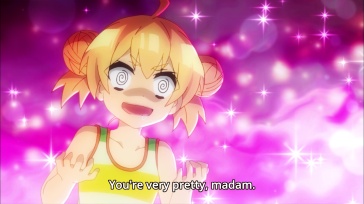 That look combined with those comments has a very yuri feel to it.

However she also says this. 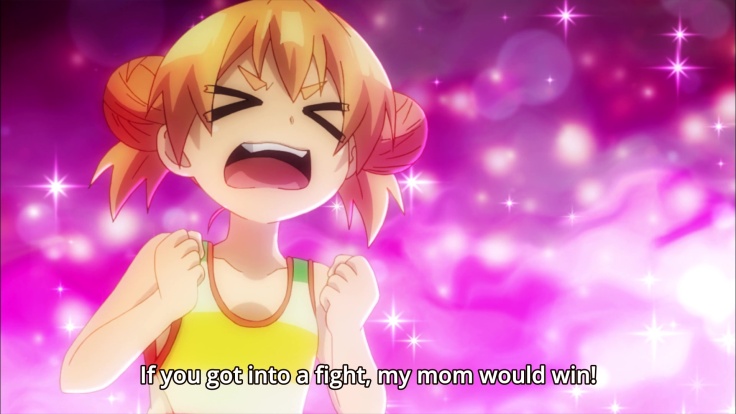 I call bluff. Iri’s a homuculus and without having to be the Grail she’ll pretty much live forever bar getting killed. Add to the fact she can do magic, Tatsuko’s mom would be a speedbump. But it’s so cute that you think your mom can win Tatsuko.

And all Iri does is smile. Like she knows all she’ll win.

Anyway Suzuka asks if Tatsuko’s going to be okay but she doesn’t understand what she means. Then one of the attendants pulls Tatsuko up to height measurer and checks her height to see if she’s tall enough to ride the ride.

Ah she’s the shortest amongst them…

She barely gets over because of the ahoge. Once that happens the girls get on the coaster and everyone’s excited save Miyu. She just goes on about how she’s not going to be afraid and then breaks down how roller coasters work scienfically.

And then they hit the first drop… 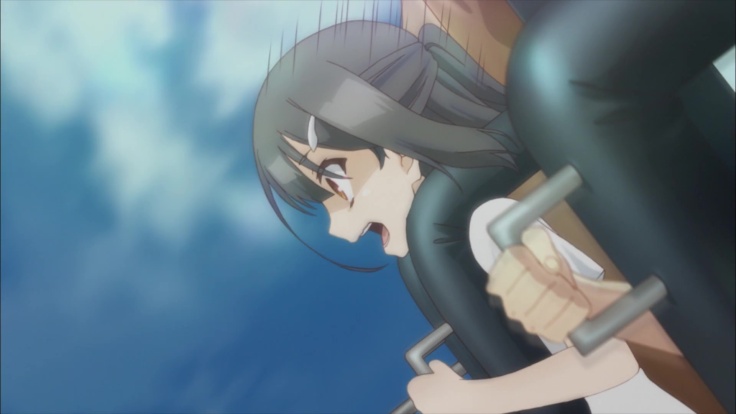 Ah she looks so happy…

And everyone smiles and yells as they ride the roller coaster while Miyu just sits there wide-eyed.

So then we go to through a quick montage of scenes as the girls go through different rides. 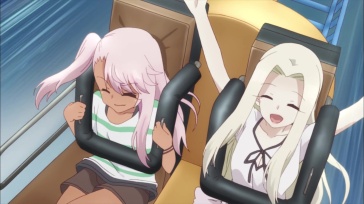 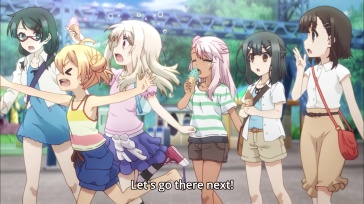 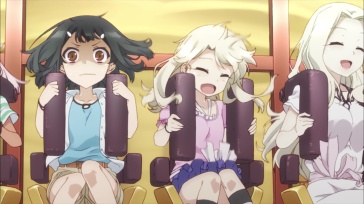 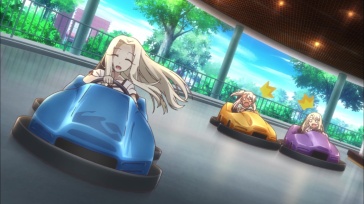 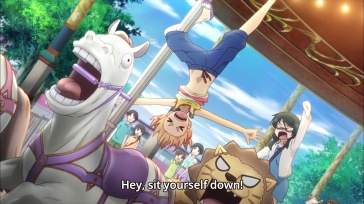 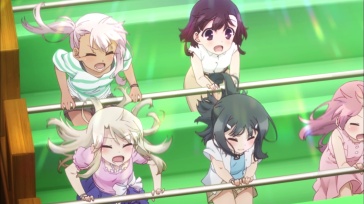 It makes me happy to see Iri and Illya having so much fun. They suffer so much during Fate/Zero and Fate/Stay Night. I remember a tweet that Hiroshi Hiroyama tweeted last season after the Illya death episode.

Both Illya and her mother screwed over big time in their original stories so it’s good to let them have something in this side universe.

So after the montage of rides, the girls take a break and Illya asks if Miyu’s having a good time.

Look that rush of happiness! I wish I could tell you about Miyu’s past but I’m not. All I can say this is the first time she’s ever experienced anything like this and she’s happy she’s getting to spend it with her friends.

So we switch over to the next table where the rest of Illya’s friends are hanging out with Iri and they love her a lot. Iri is an easy mom to love. Being voiced by Sayaka Oohara makes her even better too.

So somehow the conversation gets to Iri and Kiritsugu which gives me the opportunity to say this. Kiritsugu where are you? Seriously man. Your daughter had her 10th birthday and you were nowhere to be found. I understand that you’re going all Magus Killer to make sure that the Holy Grail War doesn’t start up again but come on! Take a break and go see your daughter.

So while Iri goes on about her and Kiritsugu, the loudspeaker goes off and announces that the park’s parade is about to begin. Yay!

Also if you’ve watched this episode, can you catch three musics in the background?

So before they start going over to the parade, Iri warns the girls to be safe.

Come on what are the odds of that happening? 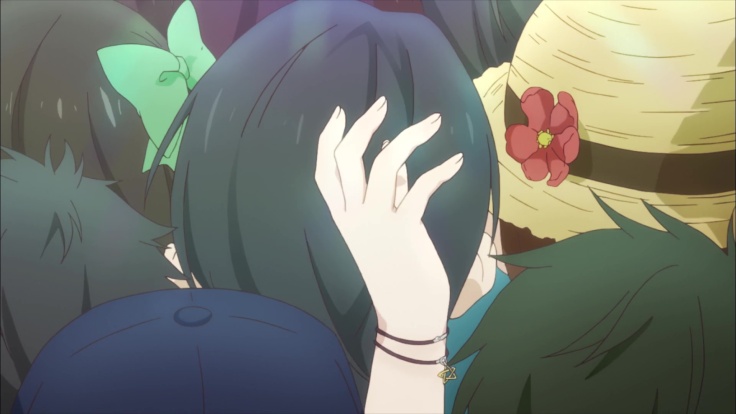 Man that was quick.

They killed her in the first season and she still comes back. Arturia Pendragon, Type-Moon’s cash cow! 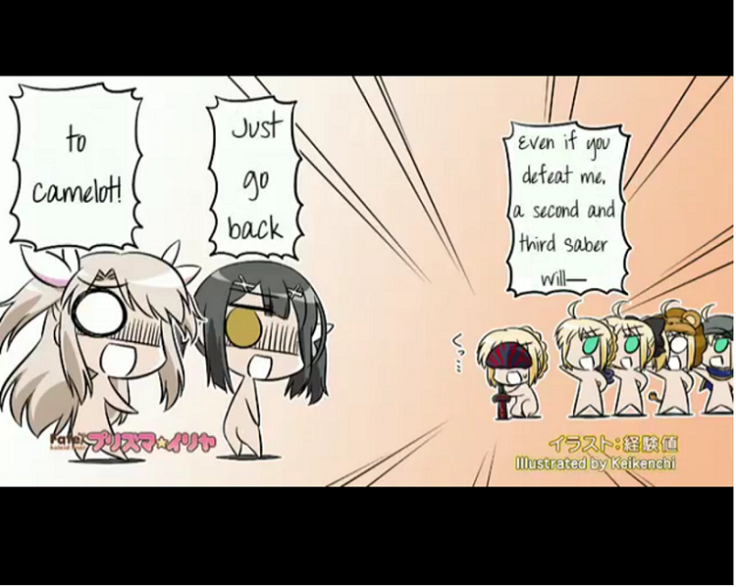 I use this when there’s too much Saber in the air.

So after Miyu manages to pull Illya out of the crowd, the girls notice that they lost Iri! See this is why we needed someone like Sella!

I know they say Caren but I like to write it as Karen. It’s the first translation I heard so I’m sticking with it.

So after finding Kotomine’s daughter(read:demon spawn), they ask why she’s here since teachers can’t do part time jobs. 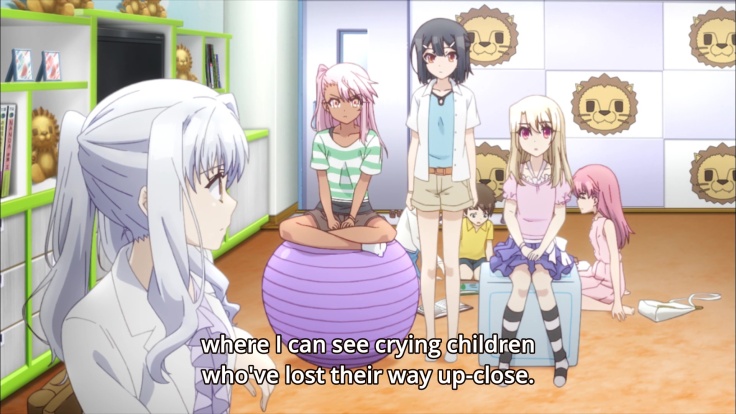 So it’s more of a volunteer thing? She’s truly Kotomine’s daughter…scary but cute.

Anyway then Kuro gets a call on her cell phone which was just mentioned right then and Iri calls them. Turns out that she was swept up by these bridal people to take photos in a wedding dress and she can’t get away.

Kiritsugu you lucky guy! Another reason why I question why Kiritsugu isn’t home yet. Hot wife and nice family? What is out there that better than this?!

However the other girls are willing to let her stay. After all she didn’t get to wear a wedding dress to get married to Kiritsugu. So they say that they ran into their teacher and she’ll be their adult supervisor. Iri’s good with it and then they ask Karen who agrees. Looks like she doesn’t got anything better to do.

And then we see this.

If you’ve noticed this lion in the background before I said anything congrats. If you know who it is, congrats. For those that can’t figure it out, you should be ashamed.

It’s Bazett. It’s nice to see her like this. Despite being pretty much serious all the time during Fate/Kaleid, she is a nice girl at heart. A bit of Fate/Stay Night and Fate/Hollow Ataxaria lore for you.

Bazett like Karen originate from Fate/Hollow Ataxaria. Bazett is the original master of Lancer of that war. The main reason she summoned him(because as a member of Association, she could have gotten her hands on some really broken catalysts) is because she’s a fan and she read his legend. She wants to be able to make his legend better and make him happy. She even starts wearing the rune earrings she used to summon him after the start of the war.

So Karen goes up to Bazett and says ‘I”m watching these kids. Come along.’ And just for her instinctive trolling she snaps a few pictures of Bazett.

Then we have another montage… 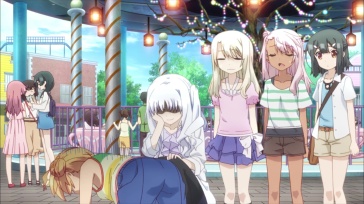 You’ve got to love Karen. Kotomine would be so proud.

So as that montage comes to an end, Miyu notices that Illya’s charm on her bracelet is gone.

And immediately the girls move out and start looking for it.

And we have Ruby say that Sapphire and Miyu are on top of the Ferris Wheel. Turns out that Miyu’s using Sapphire to scan the area but the area’s too big for Sapphire to find the charm.

They both try but it fails. And the day ends and the park starts to close, Illya tells them all to give up but Miyu refuses give up.

And as she runs off Karen gives her some nice very Kotomine-ish advice. And that gives Miyu the idea to check out the river where they find the charm.

And Illya jumps down to hug her and Miyu tells her that the bracelet should be a remembrance of the day they had and their connection to their friends.

After that we get back to the park’s entrance with Iri who apologizes for taking so long but then she sees Karen and she’s surprised for a moment. There’s not much said but it’s clear that the two of them know each other.

And it’s clear that Kuro’s the only one that notices this. And as the day ends, Illya smiles.

And after the credits it’s confirmed that it was indeed Bazett in the lion costume and when Karen asks why she’s still wearing the costume she says this.

And Karen just pauses for a second and looks at her and says I’ll take you back to the city and the episode ends there.

A filler episode but a good one. The beginning part was important. We’re clearly building up to the eighth card but it’s going to take some time and Zwei was practically over by the time the second season ended. They need these filler episodes to properly pad out the season. However I’m good with them since they clearly show a connection between the canon.

So that’s all for this episode. Looks like next episode we’ve got the girls at a neighborhood festival and Rin and Luvia look like they’ll be there too. Can’t wait!

One of the most cute magical girls ever! I get my pics from Zero-chan not Pixiv.