I’m kinda happy that we finally are getting to the 8th card business. In a way I wanted to see a little more of Illya’s slice of life life but hey it’s got to end some time.

So we start off the episode with Illya and Kuro sweating inside the house. When they ask Sella to turn up the AC she says this.

She takes her charges seriously.

So then Shiro comes around and asks if Illya and Kuro want to help him out a bit.

So after the opening, we see that Illya and Kuro are helping Shiro out a bit in the garden.

So while Illya is watering the plants, Kuro starts spacing out and when Illya calls out to her she gets a bit playful and splashs her with her watering can.

Next up is the plants in the backyard but there’s someone or some two there already.

Finally someone that can be called hot without being considered for the lolicon list!

So after a bit of whining about they’re hot(you have no idea how hot they are) and Iri asking if the girls want to jump in, Liz asks Illya to add some more water to the pool.

She does but as she does Shiro comes around the corner. Good he has a natural reaction to seeing two hot girls in a pool in bikinis.

Iri asks if he wants to join in and Kuro perks up and says she’d love to go into the pool and be all cramped with Shiro. Shiro fight against your lolicon instincts. 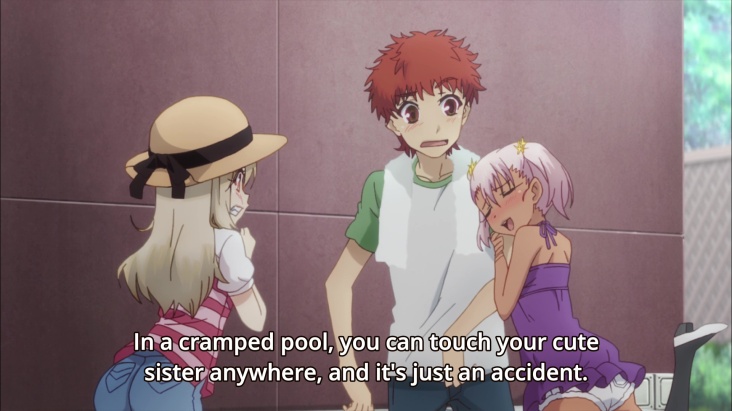 If we had Kuro as bait for lolicons, the jail would be full of perverts.

So trying to reign in Kuro, Illya throws the hose and it lands…right in the middle of Liz’s boobs. I’m serious. You can’t make this stuff up.

And it doesn’t take long before things are all covered with water. And Iri takes the chance to push Illya and Kuro into the pool.

Such a playful Mama. I wish she raised me. Anyway she teases the girls a bit and says she just wanted to play with her kids in the water and apparently that includes Shiro. Now that’s somewhat sweet since Iri has pretty much messed with Shiro at every possible opportunity. However despite all that she still considers him her son. That’s nice.

And cue Sella walking up and thinking Shiro was going all lolicon on the girls.

A second later and we get this.

Oh and she also mentions that someone from Luvia’s side of the street came over and told them that Luvia’s having a party to celebrate the completetion of the reconstruction of the mansion.

Yay! It took a while but it’s finally done.

So they all take up the invitation and head over to the mansion where Luvia seems to have gone all out. 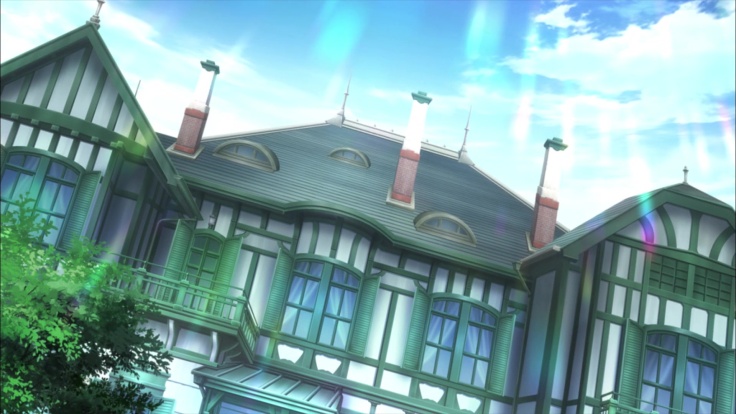 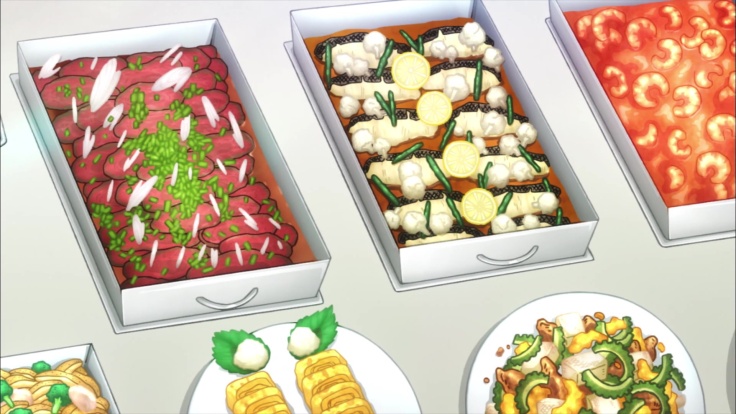 And after a quick welcome from Luvia and Miyu, everyone starts to dig in.

And Shiro thanks Luvia for letting them come over. 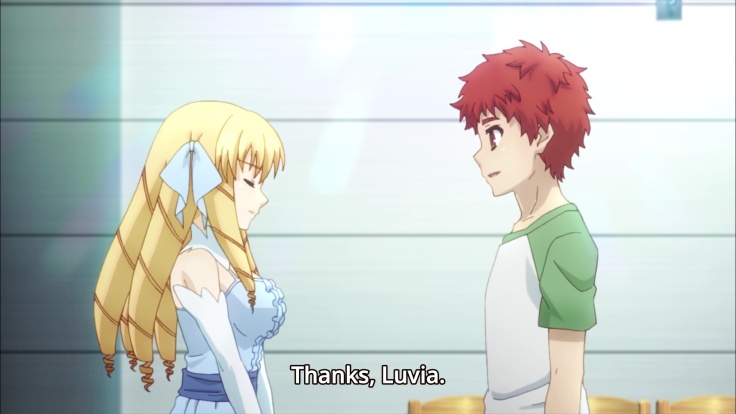 That’s what happens. This is what Luvia thinks. 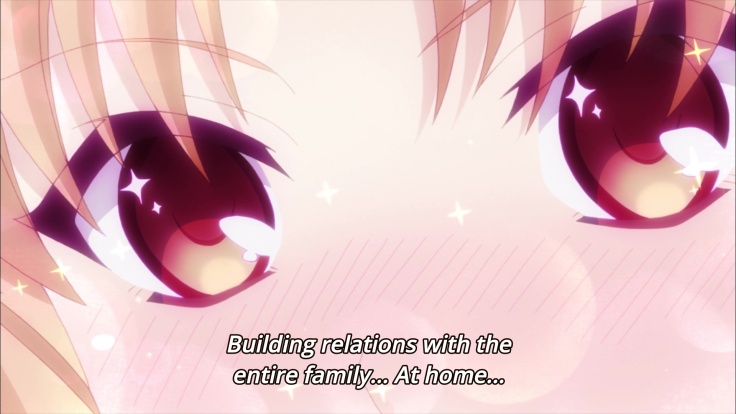 And then Rin comes over and shoves her out of the way to get to Shiro.

And then Rin hands him a glass of water and then goes all classic tsundere on him. 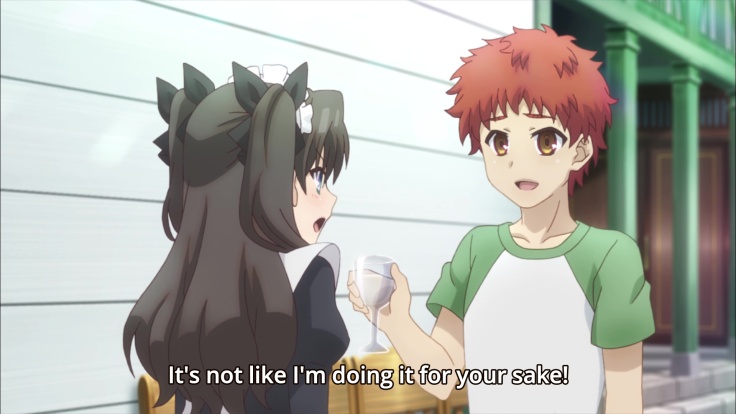 And this is Kuro’s response.

She knows the classics.

And then the party begins at full swing! 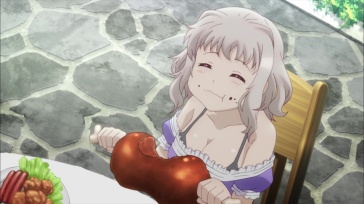 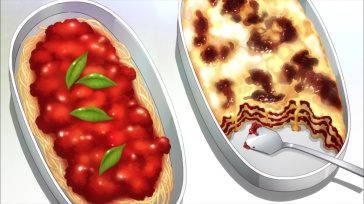 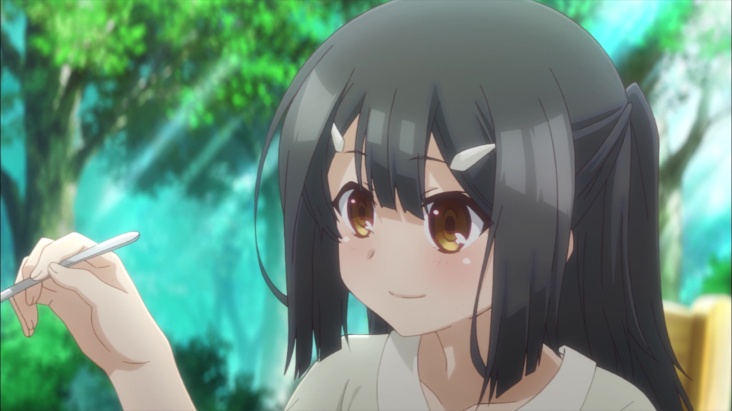 And there’s a little scene that was hilarious to me. So Iri goes up to Rin and Luvia and thanks them for inviting them. And she gives them a present for helping her out at the school(that was in Zwei first season)

Iri is a creepy mama now. What are you going to do girls? 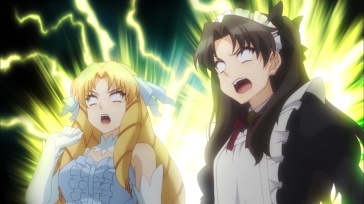 Man do they want Shiro! Oh Shiro you and your haremness.

And then Shiro gets harrassed by August, Luvia’s butler.

And when he comments on the knives, August says this. 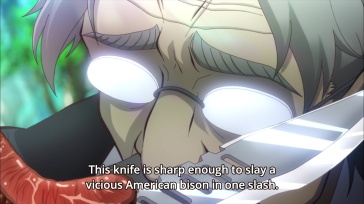 Shiro go for Rin in this world. Luvia’s got a scary butler.

And then we move to the girls and Rin and Luvia come over to tell them it’s time to make their move for the 8th card.

So we move afterwards to the girls making their strategy. 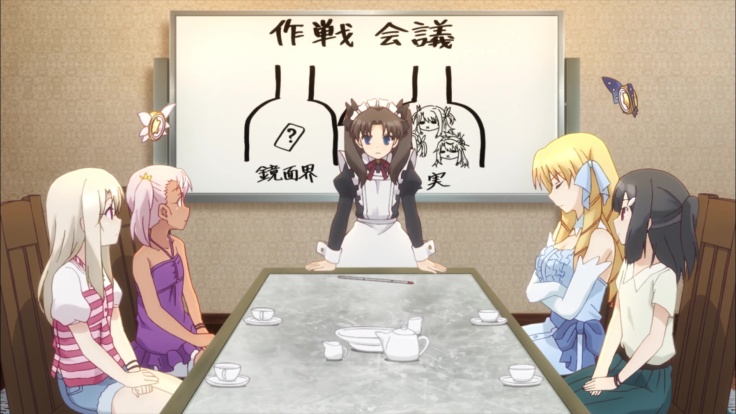 And turns out they’ll be taking Bazett along but not as an ally. More of a race to see who can get the card first. You do realize just how monstrous Bazett is right? People say that if Bazett was in Fate/Stay Night’s Fifth Grail War, she would have cleaned house against everyone.

And it looks like Bazett’s got the advantage. In terms of cards, they’ve only got Caster, Assassin, and Berserker compared to Bazett having Saber, Lancer, and Rider.

The plan is to hit the card with everything they’ve got right from the start. The battle begins at midnight!

Things are going to get dangerous and as they leave the meeting, Illya and Miyu decide to get some last minute practice in as Kuro watches on.

Meanwhile we head over to Rin and Luvia after the meeting. They do a little light hearted teasing before Luvia says if Rin burns through all her gems, she’ll work her to the bone, now and forever. It’s not a bad way she’s saying but in her own way Luvia cares about Rin.

So at the end of the conversation, Rin gets up and goes to meet with someone.

We move back to Illya who’s tossing and turning in bed. She can’t sleep with the battle coming up. So she goes to the bathroom and ends up overhearing a conversation behind Kuro and Irisviel.

Things are heavy. Kuro aggressively questions her mother about whether the cards and the Grail wars are linked. And turns out that Irisviel really doesn’t know. However Kiritsugu is currently working to make sure that they never happen again.

Also yeah Iri…technically you’re wrong. They’re are traditionally 7 classes but we can have about 9 or 10. The three extra ones are Avenger, Ruler, and Saver.

I’ve just recently read the 31st chapter of Drei and I have to say even though we haven’t seen much of him in Fate/Kaleid I have way more respect for Kaleid Kiritsugu than Zero Kiritsugu especially in his Kaleid alternate.

It’s complicated but I like how Kiritsugu basically said in Kaleid, ‘Forget the Grail war. My wife and daughter are more important to me that any of that stuff.’ That’s something to respect.

And then we switch over to Miyu who can’t sleep as well. Luvia comes out to comfort her. Luvia knows that something is up by Miyu’s fear and shock that they are eight cards. However she’s not going to pry about it. She’ll say something when she’s ready and she says this.

Shizuka Ito did it good. It was a good moment in the manga but it was even better here.

And then we move to Rin who meets up with Bazett to tell her the meeting place.

First look at this. 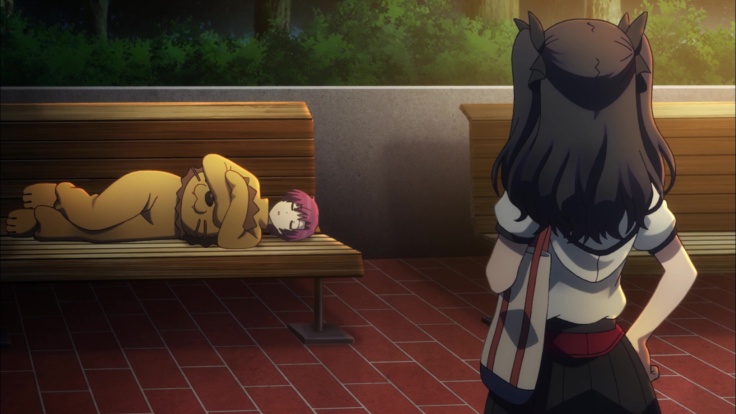 Wow she really did use it as a sleeping bag…

Anyway the converstation between Rin and Bazett takes a different turn. Bazett in her own way tells Rin it’s wrong to have Illya, Kuro, and Miyu fight their battles for them. She also tells them at the same time it isn’t her mission who’s using the Kaleido-sticks so she isn’t going to tell anyone. Nice Bazett!

However Rin says that even though they were dragged in, all three of those girls have risen to the occassion and done a lot of things Rin and Luvia didn’t expect. It’s save to say that those three girls have Rin and Luvia’s respect and love. And that’s saying something since Rin firmly dislikes Illya in Fate/Stay Night.

And after that we move back to Illya and Kuro who argue about whether to continue question Irisviel. Illya trusts her mother and then Kuro moves to Miyu. She’s clearly hiding something that might be the end of them. And Illya’s just ignoring it.

However Illya says that it’s not the time to deal with this. And she’s right. The last thing you want to do before a big fight is question yourselves and your allies. Those questions will be on your head during the fight. It’s hard to keep your eyes open for the fight when you’re wondering if you have a traitor at your back.

Illya has resolve to trust Irisviel and Miyu and she’ll find her answer later. That takes a bit of respect. She understands the weight of the situation and knows that the truth is important but not important enough to be revealed right now.

As they talk Illya changes out of her pajamas into her normal clothes and is ready for the final fight.

And we end the episode with the new ending theme, Wishing Diary, as the girls move out to fight against the eighth card.

An excellent episode. Like I said, I kinda wish the filler lasted a bit longer. I liked seeing Illya’s day to day life and her being happy with her friends seeing as every where else she gets screwed over.

So we’re moving into the final three episodes. Let’s see how things play out. Things are definitely going to get heated in the next episode. 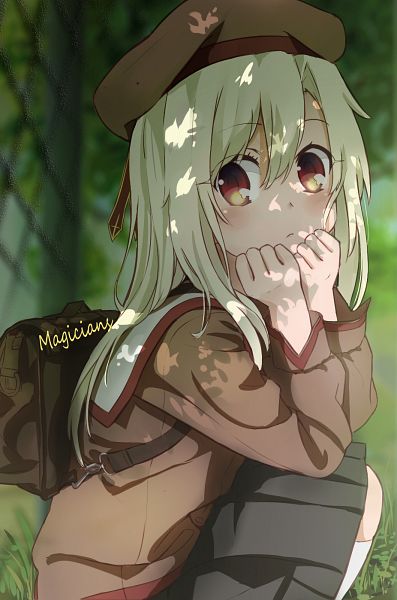 Illya-chan what are you doing in your school uniform? It’s time for the final battle! I get my pics from Zero-chan not Pixiv.