I have to say that Mashima does the good emotional moments well. I was literally crying here. Then on Monday he hits me again. Darn you Mashima!

So we start off the episode with Mard Geer noticing that Lucy’s still isn’t caught. Come on Mard Geer. Give the girl a break and give her a slap on the wrist. Just throw her off and that will be done.

Well that’s just not how things work with demons. 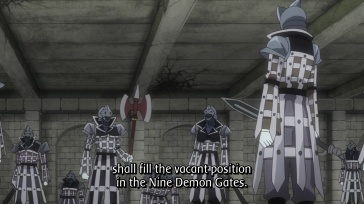 Looks like the soldiers will be highly motivated. And that’s the problem with bosses now a days. Not motivating their employees. I want to come to work for more than just a paycheck. Give me something that I want!

So we have Lucy running from the soldiers and by running she’s surfing. She’s about to totally hang ten, dude. 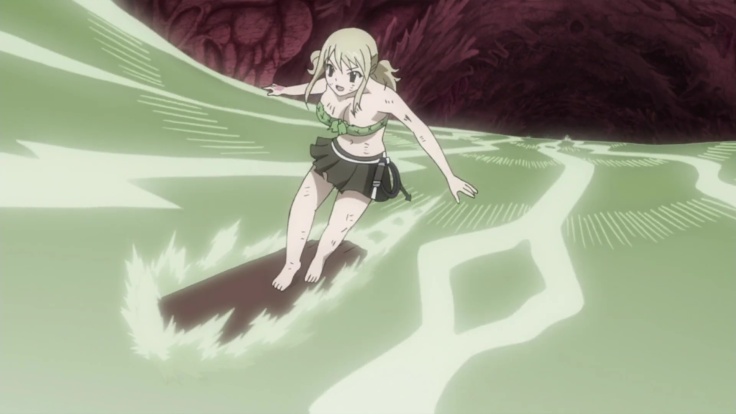 So she kicks their butts but then things get serious when Lamy and Torafuzar join the party so Lucy summons Virgo and Loke to even the odds. 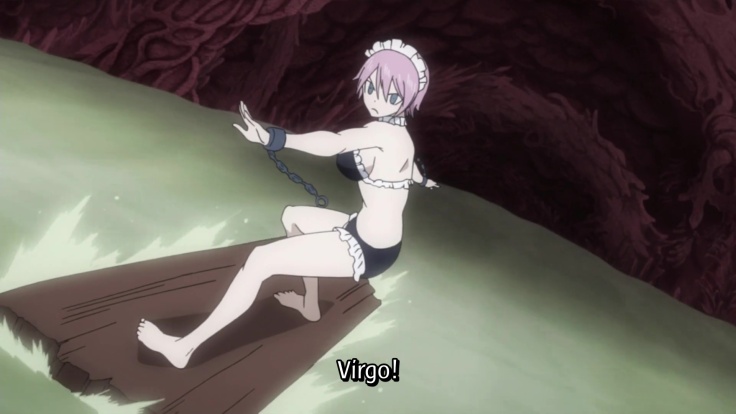 Where there is water there is Virgo in a swimsuit. Virgo why are you wearing a swimsuit?

Very true. So the fight between Lamy and Virgo and Torafuzar and Loke get underway but don’t think that Lucy’s just going to sit back in and chill.

She’s got her own fight against the newly return Jackal.

Hey Jacky. Where you been? Been okay?

So the fight between them get started and Lucy apparently forgets Jackal’s power and tries to attack him with her whip but it only ends up blowing herself up.

The battle gets to the point where Lucy’s pushed to summon a third Celestial Spirit which has never been done before. However she’s the one that manages to do it and calls up Aquarius.

Yet it doesn’t even work since Torafuzar can swim right through Aquarius’s water and attack her all while Jackal takes care of Virgo and Loke.

It comes to the point where Aquarius can’t even hold Jackal back. She tells Lucy that there’s only way to win this fight. She has to break her key and summon the Celestial Spirit King.

At that moment Lucy and Aquarius both remember all the times that they shared together. 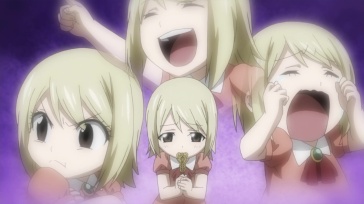 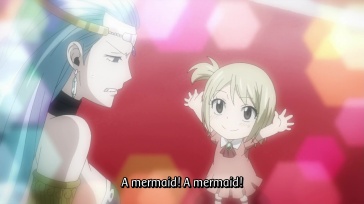 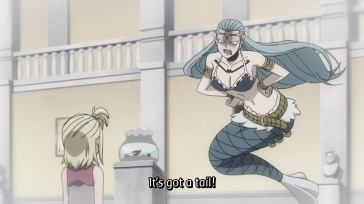 At that moment as Lucy breaks the key, Aquarius says that she’s going to miss Lucy. 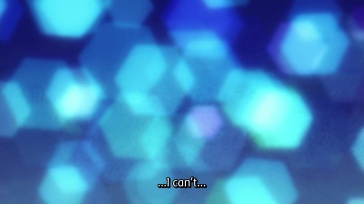 And that’s when it hits the fan. The Celestial Spirit King comes in, cuts Plutogrim right out of the sky, and prepares to fight against Mard Geer.

Things getting good! I can’t wait for the next part.

Lucy Heartfilia hanging out with Levy. It’s always good for a writer to have a person that loves to read. I get my Zero-chan not Pixiv.