My young lord has finally made his appearance and he’s voiced by Aya Endo! Also that Zwei Form!

So we start off this episode like the last one ended…with Illya’s hand on Ko-Gil’s junk.

And she predictably goes crazy. Poor girl corrupted herself.

So young Gil is a bit confused by the situation but all Illya wants is for him to put on some damn clothes. Silly Illya this is Gilgamesh!

There’s a translation link there too.

And young Gil is in complete agreement with his older self.

Unlimited Power to the King of Heroes…or is he the Prince of Heroes right now? I don’t even know. Anyway Illya throws another volley at him while Gil easily dodges them and starts searching through his Gate of Babylon in order find some clothes so Illya will stop shooting at him.

So after the opening we go back to Rin and the other or the ‘We Can’t Fly’ group who’s running up the mountain trying to reach the Illya and Miyu but then Karen collaspes on the ground and starts coughing up blood.

Aw Karen are you okay? I guess it’s her demon sensing ability. Her Psychic ability basically gives her the same pain as someone that is possess currently has.

So that puts Karen out of the running and she explains that the Holy Church has been watching the Grand Cavern of the Grail for years now and only once within the last three months, the amount of people that came out didn’t match the amount that came. That person was…

So move back to Illya and Miyu with young Gil where he just feels like revealing massive secrets.

And he reveals that Miyu is actually from another world from this one and she came in via the formula in the Grail Cavern and she’s the Holy Grail from that world.

Despite that as they run, Luvia still says that she still loves Miyu like her sister. 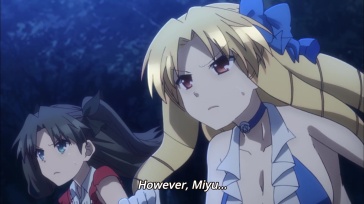 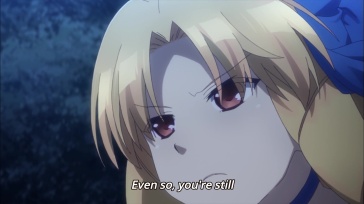 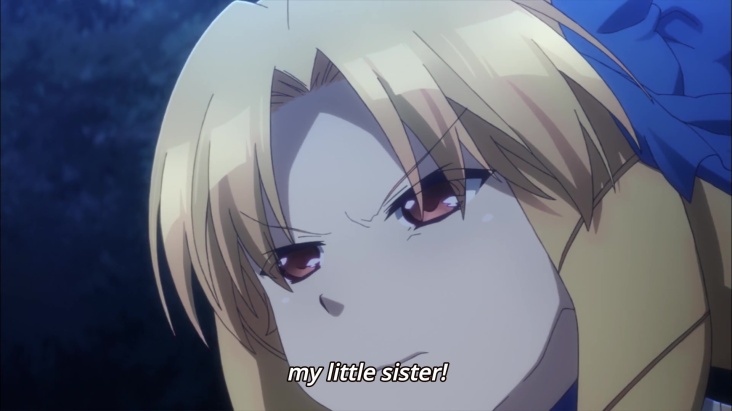 So little Gil apologizes for revealing her secret but based on the situation he had to. And then the Shadow Gil grabs Miyu and pulls her in despite everything that Illya could do.

As she falls in Miyu gives Sapphire to Illya and tells her that she’s accepted the fact that she can’t run from her fate as the Holy Grail. She says bye and tells Illya not to try to save her instead to destroy the Grail with her with it.

And after it absorbs Miyu, the orb of the formula turns black and little Gil merges with it and starts to fight Illya.

So Gil says this.

And just to oneup her, he uses True Nine Lives which the nine Phantasmal Beast Slaying Blast version and Hercules’ true Noble Phantasm when he’s in the Archer Class.

So he shoots her out of the sky and it looks like he kills her but Illya manages to Include the Assassin card to make a clone of herself and land right near him without any of the Kaleido-stick’s power.

And she gives him a big slap!

But Kuro manages to save her at the last minute.

Kuro is the best loli ever.

So now the battle starts again. This time it’s with Kuro and Bazett vs. Gil. While Bazett takes a bit of the action, Kuro questions Illya about whether she’s going to save Miyu or doing what Miyu said and letting her go.

Silly Kuro you know how an Emiya is with someone they care about. Kiritsugu doesn’t count.

Now it’s time for the moment everyone’s been waiting for! Zwei Form!

Very adorable and she’s ready for the finale of Fate/Kaleid next week.

Ah I can’t wait for that legendary battle! And the possibilities…I need to get that announcement for Drei. If I had that, my life would be completely.

From Kaleid to Stay Night, Illya’s always adorable. I get my pics from Zero-chan not Pixiv.