I have never seen an anime that combined so much beautiful art, plot, and characters be put together so well. I’m so happy I got this anime.

We start off with some of the usual. We’re in a town where nothing’s happens and everyone’s content with that.

So we start this anime off with a casual walk to school in the spring.

I don’t know whether it’s because I’m using 1080p version or because the color is just that bright but it’s just stunningly good.

So we get introduced to our protagonist, Shotaro Tatewaki, as he walks to school but outside the school gates, there’s a dead cat there.

Stoppu! That’s the first mistake right there! Basic mystery writing 101. You never kill a cat. That’s what my writing teacher told me. Why? Because a lot of mystery lovers have cats or at least have a fondness for them. I’ll forgive it once but twice is unforgivable!

So Sho(I need some type of nickname for him and I didn’t want to go Shota. There’s some perverts that like that type of thing) asks the people just standing around looking to get some stuff in order to give the cat a proper burial. Everyone just looks at him like he’s crazy for a moment before someone actually does something.

So after we do some corpse burials for cats, we get a little bit of info from Sho about the area as we walk to somewhere after school along with some excellent pans of the area. 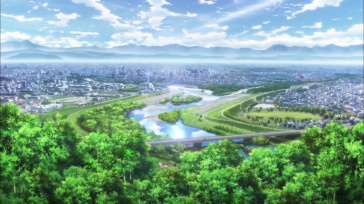 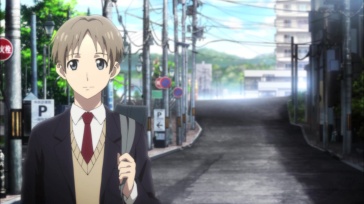 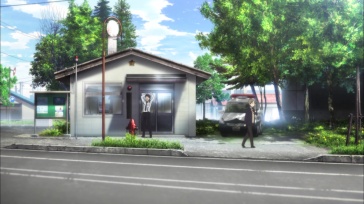 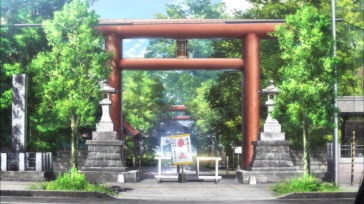 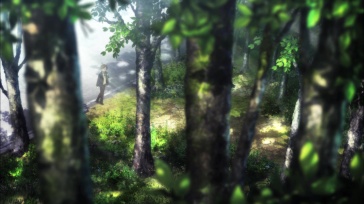 We’re in Ashikawa City of the Hokkaido Prefecture and things are fairly slow and calm. Despite that he likes it.

And as we walk we see a simply beautiful house and we finally get a sight of best girl this season! 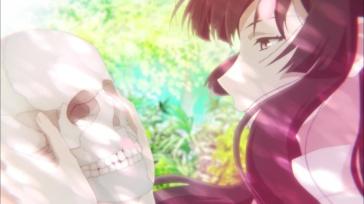 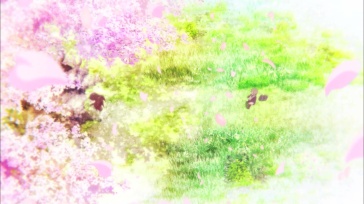 I was sad…no more Luvia after last season. I was able to get more Shizuka Ito though! Ah her voice is like sheer beauty.

So after getting our first view of our beautiful bone princess, it’s time to head out on the road. Where we going, Sakurako?

Also during the car ride, Sho does a little bit of explanation on Sakurako. Probably that is the biggest gripe that I had with this first episode. Then again it is based on a mystery novel. There are times in a mystery novel where the protagonist or viewpoint character will take time out to explain what is happening or the reason for something so the audience can know.

Sakurako is the daughter of wealthy family of the area and she’s engaged to a local police officer also she’s basically a person that studies bones. I can’t remember what the actual word is.

So Sho gets all happy when they pass by a sign that says that they’re in Mashike in the Hokkaido region which is known for its Alaskan Shrimp. How a place in Japan got known for Alaskan Shrimp I will never know….

But look at the glee on little Sho’s face. 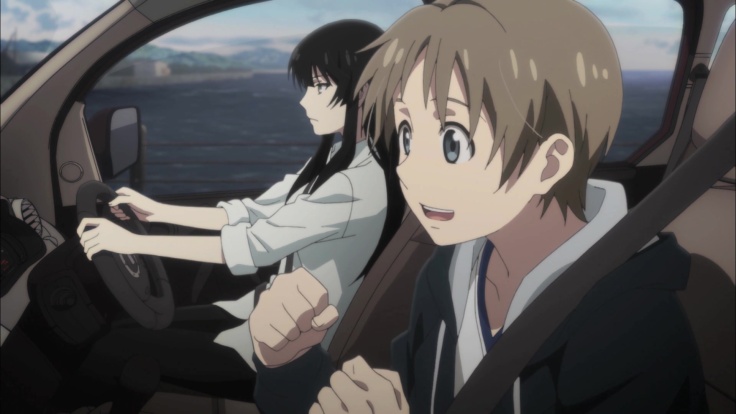 But that just isn’t how stuff is going to turn out.

Now they’re just digging for bones but hey at least they’re gold to Sakurako-chan. So Sho’s getting ticked that they came up all the way here just for some digging so Sakurako tempts him. If he can find a big find, she’ll treat him to some shrimp. 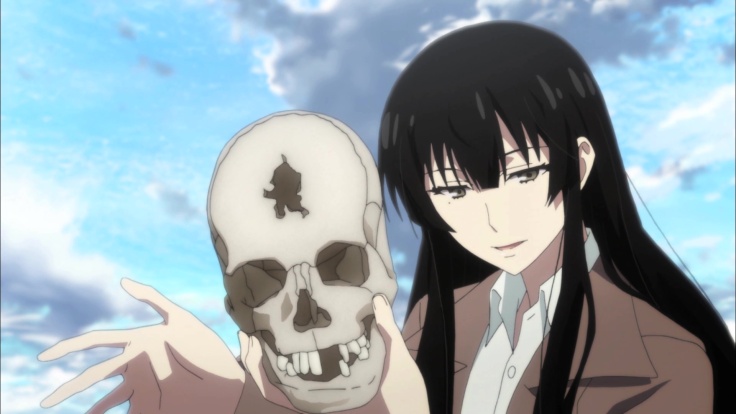 Ah ha! Isn’t this just humerus! Get it because it’s a bone!

I think she just seduced him all casual like. Also welcome back the gifs. I finally got them working again.

So it takes Sho a second to regain his footing and says that they can’t take it. Are you really going to deny this cute face man? 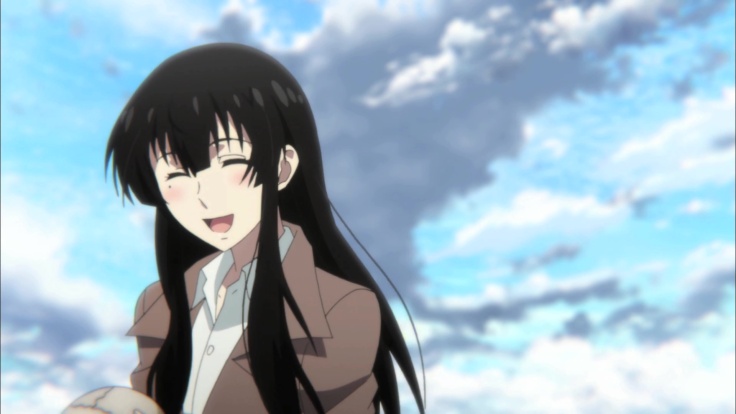 So Sho’s all about ‘It might be someone that died at sea ‘ or someone that got murdered but she goes on the explanation of how the person died and explains the entire history of the person that died.

She must have gone into a monologue and didn’t notice because then Sho pulled out his phone and called the cops. Dude no good move! Let her keep it because she’s freaking adorable.

I want to protect that smile! 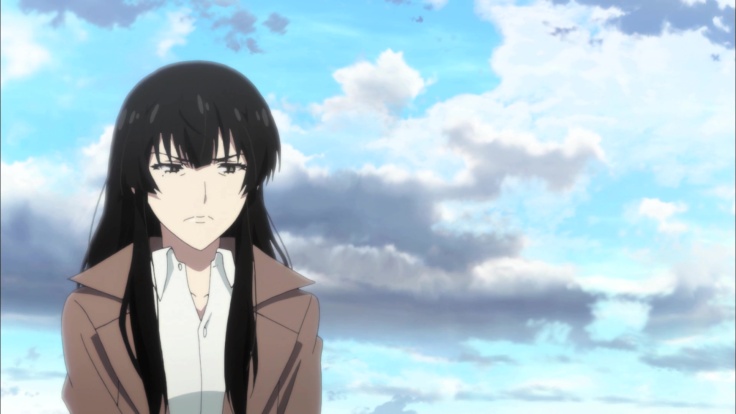 And when she realizes the police going to take her find… 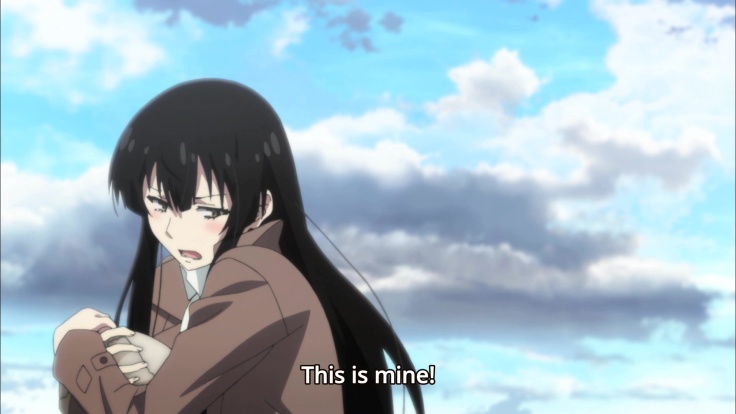 So after the break we go back to the beach this time with the police, Sakurako’s trying to explain that she wants the skull but the police keep saying that it might be something up and then Sakurako, being the awesome lady that she is, explains in full detail how old the skull is and how it’s owner died. 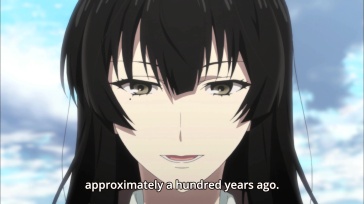 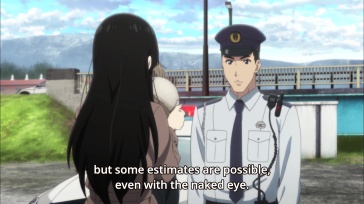 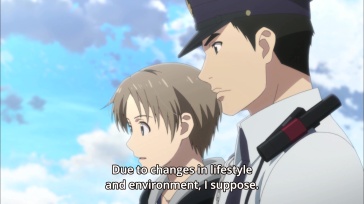 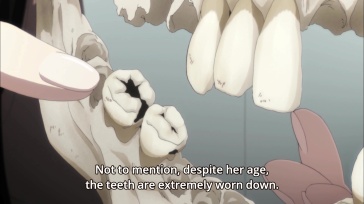 She’s smart, beautiful, a little bit childish, and very sexy. What more could you ask for in a best girl!?!

And when Sho asks how she was able to see so much she says.

Her coolness is through the roof.

So regardless if she’s right or not they’ve still got to go the station for some stuff and while they go the officer mentions two other bodies.

They stop there and we see they. Sakurako does her magic on them and basically saves the day. The police originally were going to nail this down as just a double suicide but she was able to see it as a murder.

So once they return to the police station, Sakurako tries to go out and make phone call….but she’s really trying to sneak the skull out. Come on guys.

You get candy or money for a reward, Sakurako-chan. Not skulls…

So Sho and Sakurako go back to her place where her maid has made an awesome shrimp feast for them. Turns out that she called the maid in order to tell her to make some food for Sho since he didn’t get any shrimp while they were out. So cute. 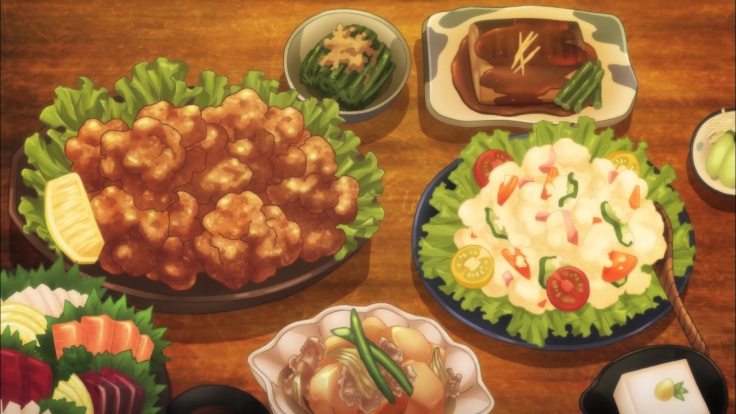 And it turns out that Sakurako’s aunt stopped by but we missed her but she left some nice flowers…I have a feeling we’ll be seeing this aunt soon.

And we end the episode with Sho actually getting his shrimp. Eh let’s through the kid a bone.

So with that the episode ends.

Now usually I’m not the one that talks on about the visuals of the anime. I mostly focus on the story and the characters but I have to say that the colors, visuals, and the symbols done in this episode were done perfectly. I have to say that if they keep up with this they’ll have a hit on their hands.

So that’s it for this episode.

There hasn’t been any fan art that I’ve seen yet so I had to look around for this one. I get my Zero-chan not Pixiv.