It’s time again for Monthly Manga and this time it’s a good one. 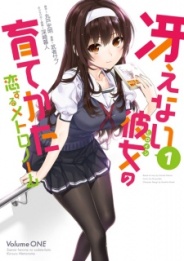 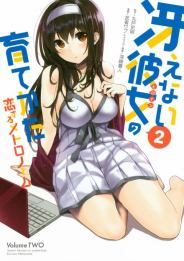 It’s something I technically reviewed before but hey I didn’t go into depth with. So Koisuru Metronome is a spinoff manga from the original Light Novel, Saekano: How to Raise a Boring Girlfriend.

I like to think of the other manga, Egoistic-Lily, as the Eriri Route while Koisuru Metronome is the Utaha route.

The main reason I got into this manga is because I really loved the Saekano anime and I couldn’t just have one little taste. I had to read and watch everything I could get my hands on. Then I came across Egoistic Lily and Koisuru Metronome. In general I thought Egoistic Lily was not a good story. It was simply the same story that you could have gotten during the anime/light novel and add the fact Eriri isn’t really a good balanced tsundere she comes across, to me, as annoying.

Utaha’s Koisuru Metronome is a completely different story and Utaha is hiding a lot more about who she is to Tomoya. Add in Tomoya’s clueless nature it makes their journey a bit more interesting to watch.

I think the main thing that turned me off Egoistic Lily was that Tomoya knew Eriri very well since they had been friends since they were little even though they stopped before. Tomoya didn’t really have any suprises with her because he knew her so well.

Everyday with Utaha is a surprise because she casually seduces him, she hides her feelings with snark, and she’s never really saying what she really means. That makes her more interesting because Utaha wants Tomoya to figure things out but he doesn’t. It’s in general more grabbing because of their dynamic as well.

The art is simply excellent. It’s easy to remember that Utaha is supposed to be incredible beautiful but with this quality of art plus the occasionally color page, Utaha is just a knockout. Also the other characters are very well strong and the visual jokes hold out well.

In visual novels, there’s always a point where all the routes start and then at a certain point, they splitter off into their unique points. For this, the Utaha route starts at Utaha’s interview for her last book of Koisuru Metronome. And then it completely changes from there.

Some people have said that Koisuru Metronome is ‘What would have happened if Tomoya never met Megumi on the hill?’

Well it’s happening right now. He’s falling for Utaha and if he’d actually figure it out he’d be with her! 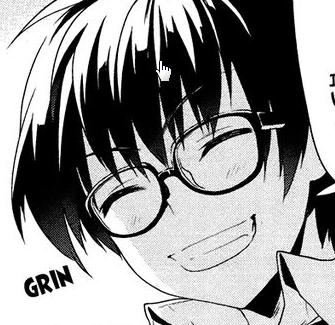 Tomoya is arguably the same as he was in the original however he’s got some new responsibilies. He’s now Utaha’s editor for her new series of Light Novels and that’s a lot of responsibilites. He’s not actually checking her writing but doing more of the stuff that agent would do. He’s making sure her manuscript’s in, finding an artist to do the character designs, checking the hype on the novel, and such. I find him a bit more enjoyable here.

Maybe it’s because he’s working for someone else rather than on his own random inspiration. Don’t get me wrong. I liked Saekano but I felt that Tomoya just got a random feeling one day after seeing Megumi and just went along with his whim until the end.

In this he’s more beholden to something else: Utaha and her writing process. Being a writer I can tell you, writers do some weird things to get that magic going. I have slept in a tree in the middle of late fall for an idea.

And working with her changes him. At the end of the most recent arc, he shut down his blog and during the original light novel he’s still doing it as far as I know. That’s a big change. That means that he’s focusing everything on making Utaha’s novels be the biggest thing out there. 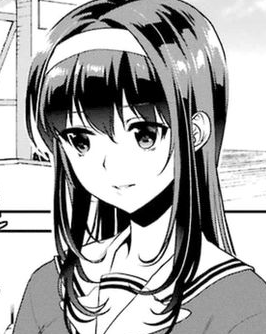 The star and the heroine of the manga.It’s safe to say that Utaha is laid all out for us here. We see a lot of more of her character that isn’t really shown in the anime. Mostly because unlike the anime where we’re mostly with Tomoya, Utaha here is the second lead so we get her perspective too which adds to a lot of stuff that we were confused on earlier.

One thing is that Utaha based her characters on herself and had a crush on Tomoya. Once Tomoya said he wasn’t fond of one of the character, particularly the one that Utaha had based off of herself. That really hurt her and add to the fact he refused to read the final volume of Koisuru Metronome on a ‘I don’t want to read before everyone’ moral, it felt to her that she really was rejected by him.

Another is when she met the girl that became her illustrator for her new series she looked exactly like the character that Tomoya preferred in the novel. That caused a lot of paranoia in here. Is he going to choose her over me just like in the novel?

All in all, this manga shows Utaha to be more human. She’s more than just a sexy teaser. She’s a girl that wants to be liked back by the guy that’s too dumb to notice.

In short if you’re unable to read Japanese and eagerly waiting for the second season of Saekano this will be a perfect holdover until then. It’s still ongoing and things keep getting better.

If you enjoy Saekano, this is a must read!

From me, it gets a 10 out of 10 for its quality and story as well as the best girl and good art!

That’s all for me this month. You can expect the December Monthly Manga around this time next month.

So until the next Monthly Manga,
Later Days

ou can ask me as many questions as you want on Ask.fm and you can follow me on Twitter to know when my new reviews are coming out. You’ll know when stuff comes out right when it does! 🙂