As one book closes for the moment, we open a prequel to properly understand the ending.

With this we end the Tartarus arc, what did you all think of it? Personally I really loved most of the good moments. Gray vs. Silver was decent and Lucy’s moments were epic but let’s get down to the review.

The episode begins with the dragons landing and beginning to explain their reasoning and plan that they concocted in order to defeat Acnologia.

Anyway…the dragons go on to explain that they aren’t going to be able to stick around. Turns out that Acnologia did something to their souls which gave them only a short amount of time to exist outside of their dragon slayer’s bodies.

So as they disappear, Grandine tells them of an agreement that was made 400 years ago that Dragons will always watch over humans and even now they still will but not in the obvious and overt. Their age has ended.

Meanwhile we go over to Natsu as Igneel dies. As Igneel’s corpse disappears, Natsu remembers all the times he had with his father and swears no matter what that he will be the one that defeats Acnologia and Zeref.

I have to say I was a bit worried about this scene. The scene in the manga was really heavy and I was wondering if Tetsuya Kakihara could pull it off but I’m happy to say that he could do it and do it well. I really felt the emotion here.

We move forward one week.

The town of Magnolia is utterly wrecked. 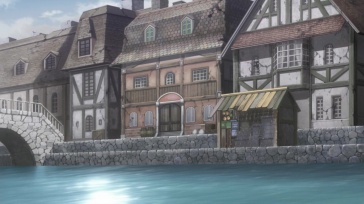 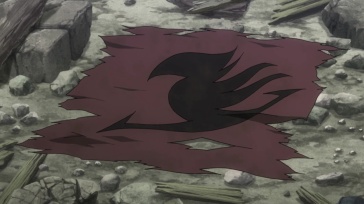 And everyone is tired and broken. The fight against Tartarus was tough and they did things to Fairy Tail that never were done in their other battles and they pushed them to do and see things that they never done before.

So as we go we see various groups and they move on past this battle.

We go over to the hospital where we see Laxus has finally woken up and swears to get stronger so his friends don’t have to pay for his mistakes.

I have to say that I really love Laxus’s character development over the course of the manga and the anime. He went from a person that valued strength for the sake of show and simply for having it for wanting strength to protect the people that he cares about. A big move for him

Next we move over to Gray who’s back in his homeland in the wreckage of his former hometown, looking the grave of his mother and now his father.

As he sits there, Juvia walks up and apologizes, saying that she was the one that killed Keyes and thus killed his father. Gray gets up like he’s going to hit her but instead he hugs her and thanks her for freeing his father.

We head back to Magnolia with Erza at a riverbank. She remembers her torture with Kyouka and wonders if she’ll ever have confidence herself again. Remember. Erza feels scared and vulnerable without her armor and add to the fact that in the original manga, Erza was stripped naked so the pain and all the embarassment is possibly doubled.

As she wonders how she can even go forward, Jellal walks by and gives her a few words of encouragment. No matter what has happened now, Erza Scarlet can keep going because she’s done it before.

We move over to a quick scene of Natsu and Happy looking around their place for some money and look like they’re planning to go on a job or something.

We switch over to Sabertooth as the entire guild welcomes Minerva home.

And one of the last place we head to is Doranbolt and Makarov where Doranbolt explains that he’s finished with wiping all the members of Fairy Tail’s memories of Lumen Histoire and he’s about to wipe his own memories. However Makarov stops him and fires something at his shoulder, revealing a Fairy Tail mark.

Turns out that Doranbolt is a member of Fairy Tail who was sent undercover to work as a member of the Magic Council but now that job is unnecessary. Why?

Because now Fairy Tail is here by disbanded.

And with that, we go to the final place which Lucy’s house where she finds a letter from Natsu, telling her that he’ll be heading out on a training trip and he’ll see her in a year.

And as she runs out to try and catch him, we see all the other members of Fairy Tail steel themselves to leave and begin their new lives.

One thing I didn’t like about this scene was Aya Hirano’s interpretation of it.

The way she says it sounds like ‘You’re leaving me alone. How mean’.

It’s supposed to be at least in my opinion, “Please don’t go. After everything that’s happened, I need someone to be here with me so please come back…please”.

Lucy’s been through a lot of stuff during this arc and Natsu was the last thing left of her life with Fairy Tail. And now that’s gone it’s like she was before she joined, a lonely young girl with no family and no where to call home.

And as the episode ends we go over to Zeref who says that he hopes that Natsu grows stronger since he is END, Etherious Natsu Dragneel.

So with this episode we’re done with the Tartarus Arc. How’d you like it? I was really into it more at the beginning and end but I thought the middle lagged a bit.

However in the manga we had a silent chapter(a chapter with no words just actions with Natsu and Gildarts meeting during Natsu traning) and then went straight into a timeskip.

However the way things are now the anime will catch up quick. However we’re going to be taking a break but not with filler but with canon.

We’ll watching Fairy Tail Zero! Ah something interesting I’m sure. I can’t wait for Mavis as a kid.

So until the next episode where we’ll switch to Fairy Tail Zero,
Later Days

Eh I needed some Erza in my life. I get my Zero-chan not Pixiv.