Finals week and the weeks up to it are truly hell. They always mess with my reviewing schedule…So sadly this will be a mini review and episodes 10 and 11 are going to be a double…I’m sad now…

So we start off episode 9 with Sakurako and Sho accidentally meeting up with good old Kougami in a pastry shop…I’m not suprised Sakurako’s got a massive sweet tooth.

So Kougami asks for some help on a little problem she’s got: which one of three paintings was her deceased grandmother going to give her on her wedding day.

So Sakurako, Sho, and Kougami head over Kougami’s house while Kougami brings out all the paintings. Once they’re all out Sakurako makes a clear and detailed anaylsis of all three paintings but at the end can only give her best guess. 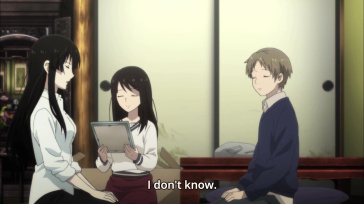 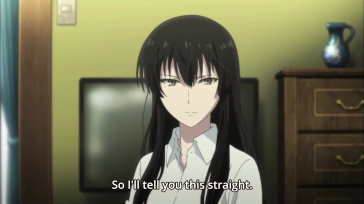 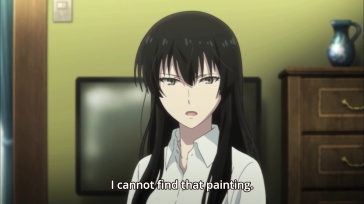 It’s because it’s something of the heart and Sakurako for all of her smarts and knowledge of human thoughts, she can’t understand people’s feelings that well. At the end, it’s up to Kougami to understand which one of the paintings her grandmother was going to give her because she knew her grandmother’s heart.

As Kougami reflects on her grandmother’s feelings, Sakurako comments how she can’t understand such ‘pointless sentimentalisms’ for such things. However Sho comments that some things are more precious because they are pointless.

And he’s completely right. To someone else, a small badly made plastic bracelet could be useless trash but to a mother, it could be a precious gift from her daughter. It all depends on the person.

And that remark later comes back to Sho when he goes to visit Sakurako and her Gran on a rainy day. They talk about Sho’s grandmother who died of bone cancer when he was a child and how during her last days she always liked to eat a particular type of pudding from a particular store.

And this time is Gran that takes the cake in terms of anaylsis. See Sho’s grandma was in intense pain because of her cancer however she didn’t want her grandson to see her suffering so she asked him to get her pudding in order to stall for time for her painkiller to kick in so her grandson would always have happy memories of her.

As Sho hears this, wonders why she would do that and even feels bad about not noticing. At this moment, Sakurako reminds him of his own words where some things are more precious because they’re pointless.

To him, the pudding didn’t matter and it was a little thing. To his grandmother it was one of the last times she could see her grandson and talk and laugh with him before her death. It’s something that could give her a sense of peace as she died and that’s worth more to her than him worrying over her.

Like they both said, some things are more important because they’re pointless.

And as the episode ends we see a strange young woman walking out into the night as she searches for her teacher.

I’m loving these episode. Remember, something may look worthless to you but to someone else it could be a precious treasure. Always remember that.

So the next review is going to be a double since it’s a twin episode. And I have to say that Sakurako-san set up its season finale epically.

Sakurako sure loves her Cherry Blossom Trees. Usually my links are from Zero-chan but they didn’t have anything good so I’m going to use Pixiv….I thought I was a loyalist…