For being a decent guy, Nishimura sure doesn’t get understood a lot…poor him

So this is going to be a double review.

So for episode 6, it’s a pretty simple episode.

For the first part the guild does a beginner quest with Nanaki so she can get her job which is a Summoner.

Kyo’s defense should be the highest then…

Anyway after that we move to after a good day of the grind where Nanaki brings this up.

Ah finals…hell…suffering and then finally the beauty of summer break.

In a way I feel sorry for the Japanese, an American summer break is pretty much from June to late August/early September while theirs is just the month of August.

Anyway after the club meeting’s over, Kyo locks down the club room until the end of finals so the group can properly concentrate although she need not worry since she’s a good student.

The rest…eh…not so good. Akane’s good. Nishimura and Ako not so much.

So Ako and Nishimura walk home and talk about school and finals. When Ako brings up summer break, he comments on something that he needs to do.

Then Ako freezes up in place…

So turns out that Ako failed her midterms and she’s on the path of having to do summer classes. That just doesn’t work with Nishimura’s confess his feelings for her plan so it’s time for some tutoring.

They try the conventional tutoring and when that doesn’t work we move to in-game tutoring…yes that was possible. I’m shocked by it as well…

So with the help of Nekohime-sensei and Nishimura himself, they manage to make Ako barely smart enough to pass. Congrats…

But after Ako and Nekohime-sensei log out, Nishimura asks for their advice on how to confess to Ako. They have nothing to add because they haven’t dated at all.

So once the last meeting before summer begins, Kyo annouces that they’ll be doing a weekend long Net Game Summer Training camp.

So while Nishimura and Ako walk home, he tries to confess to her and she says no.

Ouch…So after the credits we get the reason why she won’t say yes. It’s because he said to be his girlfriend and since in her mind she’s his wife, it’d be a downgrade so she said no.

So we move on to the next episode.

Which is the beloved beach episode which is very good because of the many cute girls in swimsuits. Thanks once again to my friend Joe for these stitched together pictures.

And this is how we start the review of episode 7…

Nah this is better.

What puzzles me is this? Ako doesn’t do any working out, she loves video games, and can stay in her room only leaving to go to the bathroom for a week yet she can have a body that most girls would kill to have.

I know it’s anime but still this one hits me pretty hard.

Kyo, Akane, and Saito-sensei all look pretty good too.

So our group has a nice day of fun in the sun, a BBQ done with Ako’s amazing cooking(she was the only one that knew how to cook), and end the day with some fireworks. 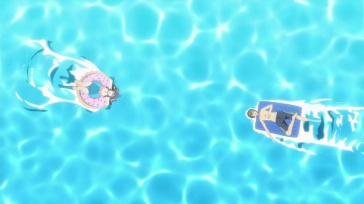 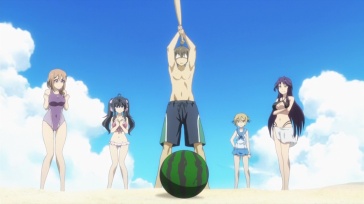 So things are pretty good for Nishimura to try and confess to Ako again…bro you’re going about this the wrong way. You can’t get into a relationship you’re already in. She can’t see you as her boyfriend because sees you as a husband.

So that fails again but at least we know she’s interested in him.

She wants that…she saw something she liked.

Anyway we move to the next day where the second part of the Net Game Club Training Camp is. And it’s a luxury hotel.

Turns out the hotel is doing a collaboration with the game and you get all types of bonuses for being here and stuff.

So when they try and log in, Nishimura gets some initial trouble it manages to go through.

And after a day of playing around and hanging out in the hotel, everyone heads back to their rooms but Ako and Nishimura decide to do a little more play in the game.

Then something weird happens to Nishimura in game and ends up force logged out and comes back.

And turns out someone stolen his login info and is using his account.

Thanks again to my friend, Joeschmo, for letting me use his gifs and his pics.

Here’s his link to the episode 6

Here’s his link to the episode 7

A pretty good set of episodes in my opinion. I just hope that Ako doesn’t get hurt during this thing.

Kyo proves that anything more than strings is a waste. Make sure to check out the Pixiv link!

Netoge no Yome wa Onna no Ko Janai to Omotta