Akuma no Riddle Episode 9: When Two Gates Lead to Hell, You Make A Third Gate That Leads To Heaven

Now then let’s see what beautiful demonesses can do.

So we start the episode off with a flashback from Tokaku with her grandma holding her.

So let me get the right. Tokaku’s mother didn’t name her! She had the baby! She sired the baby! You don’t have the right!

So go to the next scene and we’ve got Tokaku’s mom telling her sister she wanted something better for Tokaku, for not to be an assassin.

Tokaku’s aunt, Mako, promises to take care of her.

Then we flash to Mako and young Tokaku at that shrine thing.

She tells her that if she ever feels like killing someone she should remember the shrine. Why? Because ___ is watching her. Who?

We go back to Tokaku vs. Isuke where Isuke explains she and Banba made a deal. Banba will keep Haru busy while she deals with Tokaku.

After the opening we flash to Haru with Banba with Banba swinging around that massive sledgehammer. Looks like Haru’s dead… 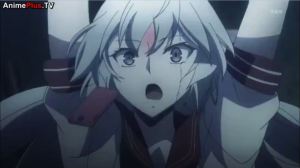 Seriously she hit her with a phone. Poor performance Banba-chan, just poor.

Maybe she won’t find her…

Yep she found her and busted down the door too.

Then Banba start smashing up everything trying to get to Haru. You know puzzles me. Banba is a 15 year old unmuscled girl. One the Black Class is for Second years which are `16 so why does something happen with that?

Second and the real reason for this little part, how the hell is she lifting that massive sledgehammer! The hammer part looks like it’s the size of her freaking head.

Anyway we get some small flashback by Banba. 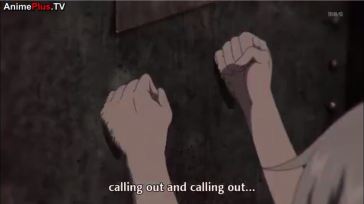 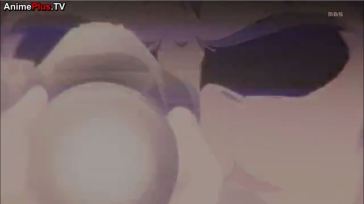 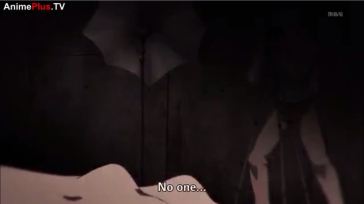 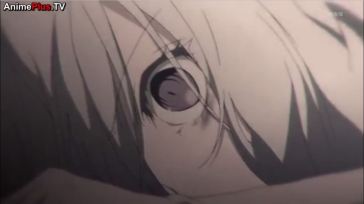 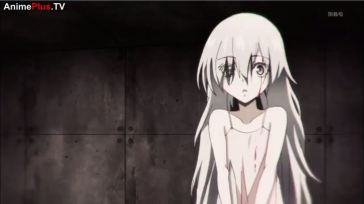 Now you wouldn’t be able to figure out just from the flashback so I’m going to give the full story here. See Banba’s original personality is Mahiru, of course you all know that. She was trapped in either a basement or a mental institution(it’s really hard to see) and she was molested and then her rapist took pictures of it. Mahiru snapped, Shi’nya was created, and they killed him. There’s something else that happened with that but I’ll leave it for later in the review. 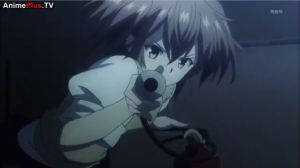 Once again not bad.

We switch over again to Isuke vs. Tokaku. 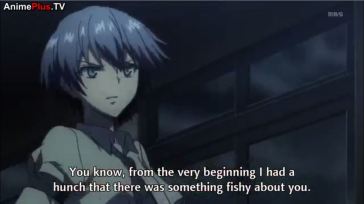 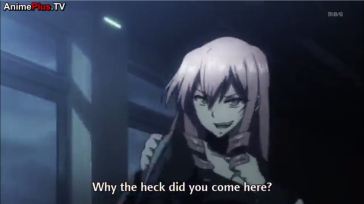 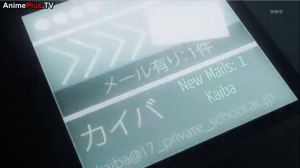 Of all the times man!

Tokaku lunches forward but Isuke grabs her and puts her in a sleeper hold. Looks like she’s out of the game but

Sure as hell didn’t explain that.

Tokaku goes for a killing move but of course we get the shrine again. 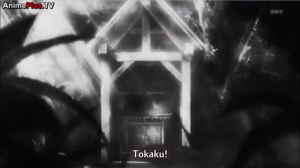 Then Tokaku runs away to look for Haru.

We head back over to Haru who looks like she’s hiding in a broom closet. Bad move, girl. That’s the number one place you don’t hide. Only one way out. 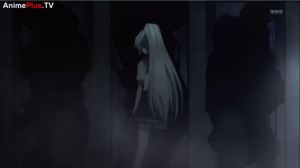 And she plays a kinda funny game with knocking on door. 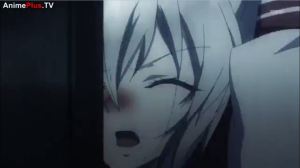 Come on Banba! Get your head in the game.

Then Haru runs out of the bathroom and Banba decides to take a little break because she’s got time to burn and she’s starting to get tired. Who wouldn’t? She’s got that huge sledgehammer. I’d get tired just lugging that thing around.

We go to Tokaku looking for Haru and finding the advance notice that Banba left. Only to get attacked from behind by Isuke. They go at it for a bit with Tokaku, blocking all of Isuke’s attacks which is weird since Isuke’s shown that she’s more than capable of overpowering her. 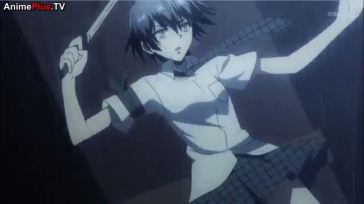 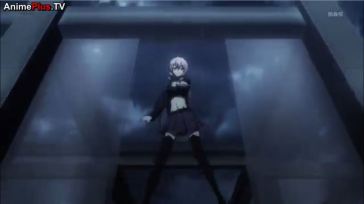 You clever bitch. There’s a reason she went so late.

After the break we’ve got Haru finding Tokaku’s cell phone and Banba comes up from behind with her trademark hammer. Haru rolls to dodge and runs into the AV room. 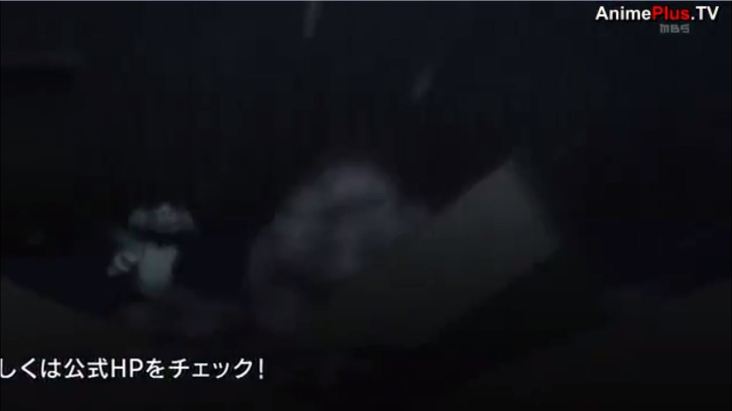 I love this girl destroying everything. It’s kinda sexy.

Now Banba’s got her right where she wants her but…

See remember when I told you something else about Banba was going to come in this review. It turns out all those flashes from the pics while she was molested made Shi’nya(the other Banba) afraid of light. That’s why she only appears after the sun goes down and doesn’t like bright lights.

Isuke deals with Banba and tells Haru that Tokaku’s dead.

She killed her daughter…what kind of mother does that! Even assassins have people they care about.

After that the flashback ends and we have Tokaku in a cloudy place with a woman behind her. 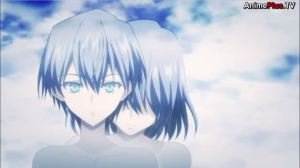 It turns out that the reason that Tokaku couldn’t kill is because her mother was protecting her from that life. Tokaku tells her mother is about time that she starts making her own decisions. 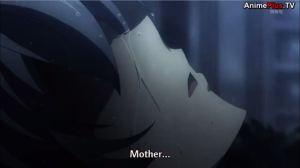 We go to Isuke with Haru.

Looks like someone’s been been busy. Isuke picks up Haru and looks like she’s about to throw her out the window but…

We have the final battle between Isuke and Tokaku and it ends pretty quick. Isuke tries shooting Tokaku but she dodges and then goes for an arm bar and breaks her arms. Now the next part we don’t see but Isuke either dies or is knocked out.

Haru collapses into Tokaku’s arms, calling her name without honoriffics for the first time. Tokaku does the same and they walk off into the moonlight.

But that’s not the end of this episode.

Before I talk about Sumireko, look at Isuke. Her hands are tied. You don’t tie the hands of a corpse. That means that Isuke’s still alive!

Now to Sumireko. The art in this scene is good. Sumireko is wearing light colors and she’s surrounded by darkness which makes her stand out more and makes you assume that she’s good but that just isn’t the case. Something about how she says what she says makes me think that next episode is going to be just as good as this one.

Now normally that’d be the end of the episode but we’ve got one more thing. 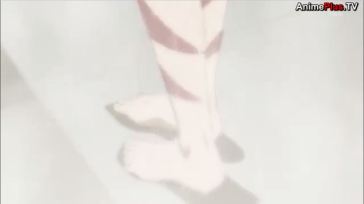 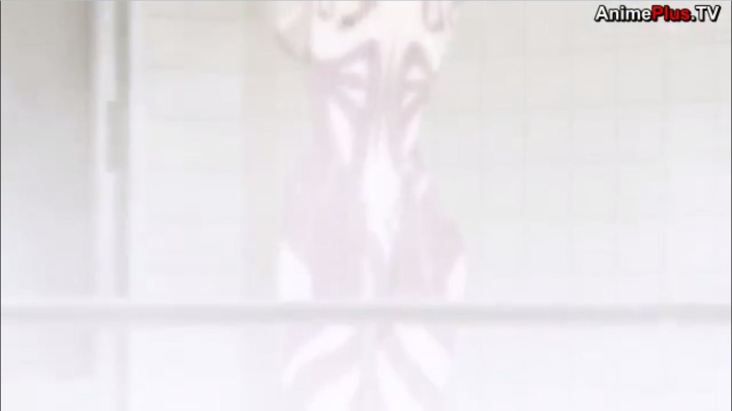 First let me get my perverted part out of the way. For a little short girl, Nio’s got some good boobs….

Now to business. She’s got a freaking full body Tattoo! Normally that wouldn’t be anything worth commenting about but her final line of the episode scares the crap out of me.

Now this is only speculation but I think that Nio’s a part of the Kuzonoha clan, the opposite family to Tokaku’s and those tattoo’s mean that she’s the heiress. Think about like a conversation. Why bring something up if it doesn’t add to the conversation. It’s the same thing as an writer or in this case mangaka. You don’t just add stuff just to add stuff. Everything’s important. Look at Eiichiro Oda(I am not comparing Akuma no Riddle to One Piece. I don’t dig my own grave.) He introduces Haki in the first chapter of One Piece and it doesn’t come up until over 500 chapters later. Now that’s good foreshadowing.

Things aren’t over yet. With Nio of the Kuzonoha clan and Sumireko left, Tokaku and Haru have got their work cut for them.

I can’t wait to see what happens next. So until the next episode
Later days.